COP27: Cities Will Face Deep Impacts From the Climate Crisis

COP27: Cities Will Face Deep Impacts From the Climate Crisis

An IPCC report found that urban infrastructure is responsible for two-thirds of today's emissions. Read this conversation with C40 Cities Regional Director for Africa about what steps are needed.

Cities around the world are some of the biggest polluters and drivers of planet-warming emissions. The Intergovernmental Panel on Climate Change report found urban infrastructure and activities caused about two-thirds of today's emissions. But failing to act could instead see urban emissions double.

Over half of the world's population lives in cities, and this is likely to increase to over two-thirds by 2030. Cities use a large proportion of the world's energy supply and are responsible for around 70% of global energy-related greenhouse gas emissions which trap heat and result in the warming of the earth. Levels of carbon dioxide, the most prevalent greenhouse gas, are at the highest levels ever, mostly due to the burning of fossil fuels for energy, reports the UN.

African cities are some of the most vulnerable to the climate crisis, yet the continent contributes to only 3% of total global emissions. This poses a considerable threat to human well-being and development on the continent as many countries are heavily-reliant on climate-vulnerable sectors such as energy, tourism, water, and agriculture to survive and grow their economies. Cities that are overheated face climate change costs twice as high as those in the rest of the world, because of the urban heat island effect. Higher temperatures can lead to greater energy use for cooling, increased air pollution, worsened water quality, and loss of worker productivity. The report says that hotter cities will have negative impacts on public health, the environment, energy systems, and economic activities.

Climate activists around the world continue to consistently urge world leaders to make the changes needed to ensure human survival on the planet. Drought, flooding, and rising sea levels are forcing many people to migrate from rural areas to urban spaces, to seek new opportunities and improve their lives. But this mass migration is having a toll on the cities due to overcrowding and poorly equipped infrastructure meant to handle the growing migration crisis. However, many cities are already starting to act by planning for and encouraging population density to prevent rural and suburban sprawl, which is less energy efficient and destroys natural habitats.

Hastings Chikoko, the Managing Director of Regions and Mayoral Engagement and Regional Director for Africa at C40 Cities spoke to allAfrica's Melody Chironda about some of the expectations coming into COP27 and how the organization is working to tackle the climate crisis.

C40 Cities is a network of major cities around the world that have committed to addressing the climate emergency and work toward a reduction in global carbon emissions as well as improve health and well-being globally and create economic opportunities.

In May 2022, 10 major African cities — Abidjan, Accra, Addis Ababa, Dakar, Ekurhuleni, Freetown, Johannesburg, Lagos, Nairobi, and Tshwane — signed the C40 clean air declaration to improve public health and climate. Air pollution has become the second-largest cause of death on the African continent, due in part to rapid urbanisation and industrialisation. Approximately 1.1 million deaths per year have been linked to air pollution across Africa.

By signing the C40 Clean Air Cities Declaration, the mayors of these cities recognize that breathing clean air is a human right and commit to working toward safer air quality that meets World Health Organization Air Quality Guidelines. The declaration is looking to continue to take bold climate action, despite the many challenges faced in recent times, with the global pandemic, economic disruption, climate-related natural disasters, and in many cases strained financial resources.

"The reason it's called C40 is initially ... we had hoped to have 40 megacities in the world," but the work has expanded so much so that "right now we have 97 members globally," Chikoko said.

He goes on to highlight how C40 cities support local governments to deal with the climate crisis. "So first of all, we would like to have committed leaders ... we would like to have mayors that make bold commitments to actually address climate change. So we have what we call leadership standards in C40 ... we require these mayors to comply with some standards that will help their cities really address climate change effectively."

The network also has what it calls accelerators, these are additional commitments that mayors make in different sectors such as water or energy, that detail "high-impact actions that mayors should take to address climate change and the mayor's commitment to those high impacts," Chikoko explained.

The next step is to put the commitments into action. Chikoko says that "the best advice a city can get is from another city that has solved the problem and has practical solutions. So we mobilize the cities, we connect to them to share experiences to actually learn from each other, but also as a collective to influence. And finally, we provide them with the technical capacity that they need, as well as help them access financing."

Due to increasingly severe impacts of the climate crisis on major cities across the continent, mayors are under pressure to act.

"I think because the impacts are now more severe, we are seeing increased commitments from cities. Because of the pressure mayors are getting. We have also seen more empowered communities and city residents that are actually demanding services, because they are the ones that are bearing the brunt. The other thing that has changed is COVID. And what COVID has done is basically disrupted the city revenue and the city finances. So there has also been an increased call for finance, to be directed to cities to address climate change given their budgets," he added.

Chikoko is clear about what is needed: urgent climate action. "This is the 27th COP. And most of the commitments we make, we say by 2030. So they are just seven more years to 2030, this COP is about action. It's about accelerating action, it's about doing more, this COP is about putting resources to implement the solutions that are required. We have gone beyond characterizing the problem, we pretty much understand what we are dealing with, either from studies or from experience, when you look at what happened in Nigeria, in terms of Pakistan ... what we are here for is to agree on the solution, agree on the actual infrastructure that we should go back and implement and agree on the financing that those actions require."

The climate catastrophe that developing countries are already facing has become a key sticking point for the climate talks with most developed countries unwilling to compensate countries who contributed very little to the situation in any significant way.

"The injustice that happens and sometimes continues to happen, because of the development pathway that developed countries took .. So what we are saying, let's be fair ... the term used is loss and damage and it is just about being fair to say, you caused this problem you have developed, you have resources, could you please contribute to solving this impacts of this problem? Financing is required? No question about it. So even if it's not looking at it from a loss and damage perspective. We need the financing, but the financing is needed now because the damage is escalating. And we can't leave the project to one geography. A geography that did not cause the problem," he said.

This story was produced as part of the 2022 Climate Change Media Partnership, a journalism fellowship organized by Internews' Earth Journalism Network and the Stanley Center for Peace and Security. It was first published in AllAfrica on 15 November 2022 and has been lightly edited for length and clarity. 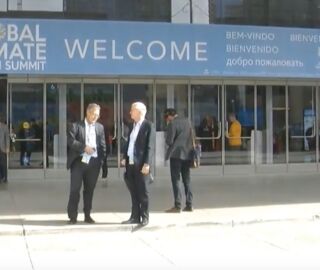