COP27: Climate Finance Yet to Be Defined

COP27: Climate Finance Yet to Be Defined

Climate finance, the center point of all negotiations at COP27, is being questioned as the parties are reportedly failing to set up a definition for it.

Various countries have proposed various definitions for climate finance. However, the Committee responsible for making the primary draft has failed to pick a specific definition as of yet. This draft copy will be finalized in the ministerial-level meeting.

“The Standing committee on finance is responsible for finalizing the primary text to define climate finance,” Ziaul Haque, a negotiator from Bangladesh told The Business Post.

“The Committee was said to suggest an operational definition for climate finance. They invited suggestions and opinions from different countries, who submitted definitions from their own perspectives and level of understanding.”

It was expected that the committee will mention two, three or, at maximum, four definitions in their primary text so that in the ministerial-level meeting it can be easy for choosing one or two specific definitions for climate finance. But the Committee put hundreds of definitions in the text, Ziaul said.

“Money comes from overseas development assistance (ODA), from bilateral funds, from multilateral funds and in many different names. In many cases, loans are also claimed as part of climate finance. That is why a definition is needed,” Ziaul Haque said.

“Some of the money comes as grants, some as loans and some as a mix of these two. And some money even comes in such projects which have no clear relation with climate change.”

“No one can say how much money is channeled so far to tackle climate impacts. Different research pointed out different figures. This is happening only due to lack of a definition of climate finance,” he added.

In Paris in 2015, developed countries made a pact that they will put $100 billion per year from 2020 in the Green Climate Fund (GCF). The fund will provide money to poor and vulnerable countries— 50 per cent for mitigation and 50 per cent for adaptation.

A new amount for the funds will be fixed before 2025, which will be more than 100 billion and start depositing the newly selected amount from 2025. But so far, there have been no developments towards fixing the new amount.

Moreover, the developed countries failed to show how much money has been allocated to the fund so far.

“We expected that the developed countries will announce that they allocated $100 billion per year collectively. But they did not,” Ziaul Haque said.

“According to their (developed countries) statement, they had to spend huge amounts of money due to Covid-19 and Russia-Ukraine war. And that is why no development is seen in this regard,” he added.

This story was produced as part of the 2022 Climate Change Media Partnership, a journalism fellowship organized by Internews' Earth Journalism Network and the Stanley Center for Peace and Security. It was first published in The Business Post on 14 November 2022 and has been lightly edited for length and clarity.

Banner image: A plenary session at COP27 / Credit: UNFCCC/Kiara Worth. 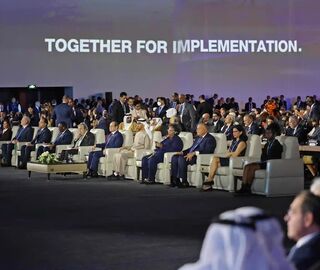