Dalit female farmers in India take on caste, the patriarchy and climate change

Dalit female farmers in India take on caste, the patriarchy and climate change

By working together, these low-caste women in the eastern state of Tamil Nadu are overcoming a daunting set of challenges 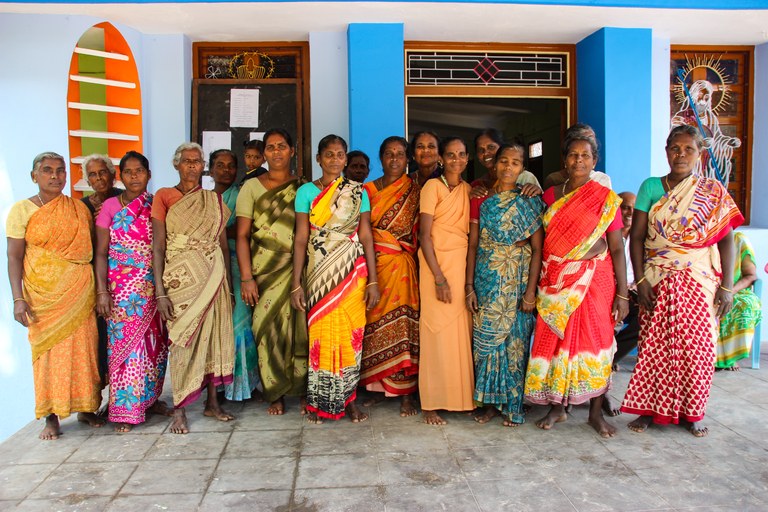 A group of collective farmers gathers in front of a church in Karaikal, a port town off the east coast of India / Credit: Namrata Kolachalam

At the midpoint of Tamil Nadu, the sixth-largest Indian state by population, the delta formed by the Cauvery River appears like a nose in profile, jutting east into the Bay of Bengal. For centuries it was a flourishing artistic hub and the home of a powerful South Indian empire. Today, the Cauvery Delta is the rice bowl of Tamil Nadu, a land of paddy fields and beleaguered farmers, its villages linked together by bridges that span dried-up tributaries.

Already disaster-prone (the Delta faced a devastating tsunami in 2004 and a cyclone in November that killed more than 45 people), the Cauvery Delta’s challenges are only intensifying, as its once-dynamic, brackish waters slowly merge with the sea and become saltier. Without urgent action, experts predict the district closest to the bay will be submerged in less than three decades.

Against this precarious backdrop, some of the most vulnerable inhabitants of the Cauvery Delta are Dalit women, those formerly known as “untouchables” who are at the bottom of India’s caste system. Excluded from resources and political power, these women are fighting for survival against the three-headed Hydra of climate change, the caste system and patriarchy. In recent years, however, more and more have turned to collective farming to survive, pooling their resources as a financial and emotional buffer against the increasingly inhospitable environment.

Although the term collective farming might conjure bleak Stalinist imagery, here it refers to grassroots, farmer-led efforts to pool finances and labor for mutual benefit. Though the farms themselves are small, because they quietly rebel against centuries of rigidly enforced social structure, the idea has radical potential. For rural women in the Delta, collective farming is a way to capitalize on their agrarian upbringings to gain a degree of financial independence, often by organizing in cooperative pods of five to 10 and cultivating small neighborhood paddies of one to three acres.

Most of the women farming in this region harvest rice one to two times per year, weather permitting, and sow “gram” (local legume varieties) in the offseason. They split the labor and the profits equally. While men in India are also increasingly engaged in collective farming efforts in Tamil Nadu, for them it has not been such a force for upward mobility as with Dalit and widowed women.

“I joined [the collective] to improve my status and livelihood, to come up in life,” said M. Vasantha, a Dalit widow who started collective farming last year in the small town of Poonthazhai.

For the first time, the women are also embracing the term farmer, which has traditionally been associated only with men.

While she admits that the four women in her collective sometimes bicker among themselves, the solidarity has given them the courage to cultivate their own land rather than continue to serve as heavily exploited farmworkers (pejoratively called “coolies”) who labor on upper-caste villagers’ property. Female farm workers say they make about 150 rupees per day (US$2.10) when work is available, while men usually earn more than double that amount—still a meager salary. By pooling their labor, they own the full value of the crops they grow, which they can use to feed their families and potentially sell for shareable profits. But, like other farmers across the Bay of Bengal region, they are faced with volatile weather patterns that present growing challenges to their newfound livelihoods.

The Bay of Bengal—the largest bay in the world—touches eight countries that together contain 25 percent of the world’s population. Along the bay, an irregular pattern of heavy rains, punishing droughts, and increasing cyclonic activity is making generational agricultural knowledge obsolete as farmers scramble to deal with the fluctuating climate.

Rice farmers in the Delta, including these women, have long depended on sustained northeast monsoon showers distributed from October to December to water their crops. However, “nowadays, we get only the unpredictable rain, not the predictable rain,” said M. Tamilarasi, who leads a collective of six Dalit women in the village of Thirukkalachery, four miles from the Bay of Bengal.

According to M.R. Ramesh Kumar, chief scientist at the National Institute of Oceanography, recent monsoons have had a significant number of days with “intense rainfall,” meaning more than 10 centimeters in 24 hours.

“It’s like you’re given one week, or one month’s food to eat all in one day. You can’t eat all of it, right?” Kumar says. Farmers are unable to store these vast quantities of excess water, and plants drown and are damaged by the accompanying winds.

Kumar also notes that despite these heavy rain bursts, there has been a drop in the overall number of monsoon depressions formed over the bay, which typically play a key role in generating the needed rainfall for much of central and northern India. Alarmingly, the northeast monsoon brought 44 percent less rain to the region than expected in 2018, only two years after Tamil Nadu withstood the driest monsoon season in 140 years. The government purchases most rice in India for redistribution, and according to its data, procurement of rice in Tamil Nadu dropped by 88 percent in 2017.

Without steady rain, ponds and lakes dry up, and the precious groundwater supply is overly extracted by water pumps and used for irrigation across the Delta. As regional farmers become more desperate, they dig deeper into the earth, occasionally flooding their aquifers with saline seawater—the kiss of death for a rice paddy.

Saudamini Das, climate change expert and professor at the Institute of Economic Growth, says that climate change challenges are “intensified by human use and misuse” of the limited groundwater supplies. Additional forms of resource mismanagement and an ongoing water dispute between Tamil Nadu and the neighboring state of Karnataka over access to the Cauvery River have seriously exacerbated these problems. 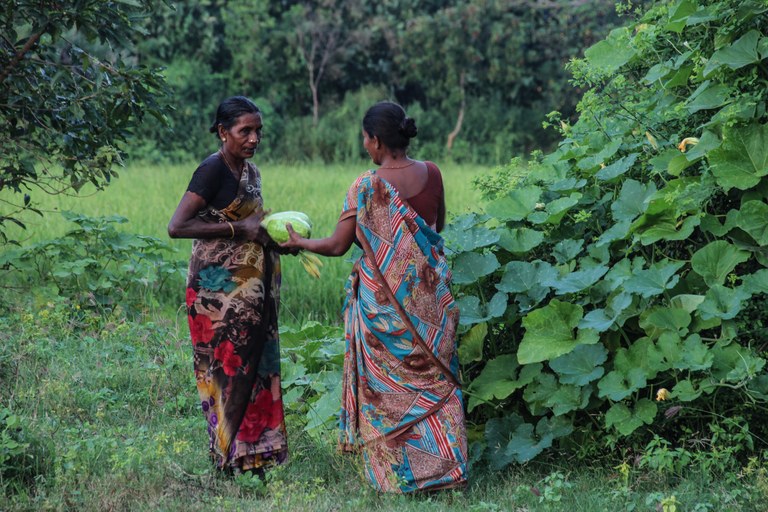 Collective farming cannot reverse global temperature increases or the rise of sea levels, nor is it intended to. Long term, the people most vulnerable to climate change can only hope for global political action to slow such challenges. But collective farming does offer a valuable way for small and marginal farmers, who comprise more than 90 percent of the farmers in the state, to mitigate the short- and medium-term impacts and expand their local influence.

Tamil Nadu Assistant Director of Agriculture Selvarajan says, “All of the produce on these farms is sold collectively, which gives the farmers bargaining power” as well as decreases the costs of cultivation. That’s particularly valuable for vulnerable groups, like women, who can finally save both money and food, enabling them to better withstand economic swings caused by volatile weather. They no longer need to rely on local landowners for employment, which is unpredictable and contingent on erratic weather patterns.

Collective farming also allows the women to diversify their crops and grow produce like eggplant, tapioca, okra, and bottle gourds to bolster their food security.

Unfortunately, while women are legally permitted to own land, securing property is very difficult (only 13 percent of agricultural landowners in India are women), and exponentially more so for Dalit women. Systemic discrimination propagated by the Hindu caste system has far-reaching effects to this day, despite being technically abolished more than 50 years ago.

For hundreds of years, Dalits were prohibited from owning property, and today the majority lack the money or status to buy land—in Tamil Nadu, 86 percent of Dalit farmers are landless laborers. To lease property, hundreds of landless women across the state depend on local NGOs to help negotiate for land as well as offer training in farming techniques.

More than 50 female farmers in the Delta region work closely with Kalangarai, an NGO led by an enthusiastic local Jesuit priest named Antony Kulandaisamy. According to Kulandaisamy, 15 women who engage in collective farming in the bay-adjacent town of Karaikal have been harassed by members of the Vanniyars community in the past two years. The Vanniyars—though historically not members of the uppermost castes—in recent years have become politically influential and protective of their growing status.

I. Arockiamary, a middle-aged Dalit widow, says, “No one from our town was ready to lease us property, but one man lives overseas now, and he agreed to give land to our collective.”

This angered their Vanniyar neighbor, who now insists on blocking the flow of rainwater from his field to theirs and refuses to allow them to walk through his field to reach their own land. Frustrated that the women no longer work in his field after years of providing low-wage labor, he threatened to destroy their water pump if they placed it in their preferred location near his property. According to Arockiamary, his actions have forced the women to pay more to irrigate their fields, cutting into their already razor-thin profit margins.

When asked if the women were fearful of what the upper-caste community members might do next, they all shook their heads no.

“With courage, we fought back and sowed our seeds. And with no man’s help,” Arockiamary says. Through collective farming, she says, “it’s like we’ve been rescued from slavery.”

In surrounding villages, the hard work of female farmers has turned plots of previously worthless land profitable, and members of the upper castes have sought to reap the benefits. In Thirukkalachery, Tamilarasi’s collective spent much of last season subleasing a plot of uncultivated, bramble-filled land from an upper-caste man, who in turn had leased the land from a local Hindu temple. After seeing the transformation of the property, temple officials demanded that the women pay a large additional sum: 18,000 rupees (US$257) to collect their yield. Since the women generally hope to make a minimum of 5,000 rupees (US$70) per person, per harvest, in addition to their share of the produce, the added expenses meant they lost any chance of making a profit that season.

Despite the obstacles, there have been a number of success stories across Tamil Nadu, and women in local leadership say they are actively helping more groups of collective farmers get started. In northeast Tamil Nadu in a village called Thiruvanaikoil, a group of 30—mostly Dalits, widows, and abandoned women—has been consistently turning a profit through collective farming since 2013.

Thanks to a strong irrigation system, the women are able to grow several crops each year as well as a variety of vegetables. Newly empowered to cultivate the land in the way they choose, the women are focused on preserving the health of the land and the community for future generations. For the first time, the women are also embracing the term farmer, which has traditionally been associated only with men.