Dammed if they don’t

Dammed if they don’t 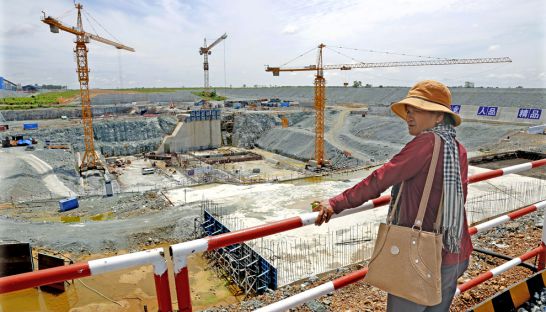 People who have accepted relocation from the future reservoir zone of the Lower Sesan II hydropower project have called for the suspension of the resettlement program for one year and help to repair homes built by the Cambodian-Chinese energy firm constructing the dam.

Villagers who held negotiations with Hydro Power Lower Sesan 2 Company (HPLS2) and officials here yesterday asked the company to sign a guarantee to halt the relocation of villagers so that they could store enough food to survive at the new villages, which those affected and NGOs have said are not placed on fertile land.

Ly Pe, a 60-year-old villager representing families in Chrab and Sre Sronok villages, some of whom have recently accepted a compensation offer from HPLS2, said if the authorities and the company did not agree to the suspension, the displaced villagers would go hungry at the resettlement sites.

“They have not offered us guarantees about the construction, so our houses might not be ready for years,” he said. “I don’t accept this new location either. The houses look good, but they’re not built well. It’s unacceptable. People only accepted the offer because they have nothing.”

Pe has not himself accepted the compensation offer of about a 10th of a hectare of land, which HPLS2 has said will come with other benefits, such as new housing and access to medical facilities.

“The houses they have built for us are unacceptable; I have no idea where I can keep my cattle.

I’m also afraid of being cheated, because they have not put their offer in writing,” he said, adding that the contentious issue of relocating the community’s “spirit forests” where their ancestors are buried had yet to be resolved. 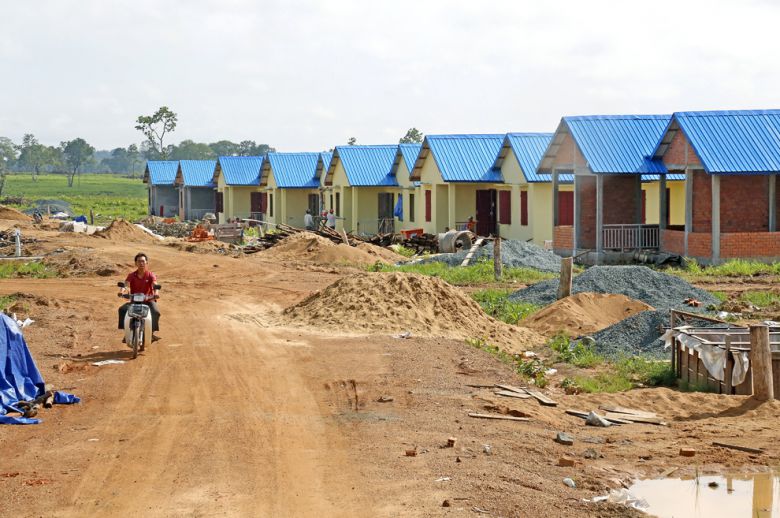 A man rides past the construction of houses at a relocation site for villagers affected by the Lower Sesan II dam in Stung Treng province yesterday. Heng Chivoan

Other villagers, such as Pim Chhouk, agreed that the relocation sites were not up to standard.

“We cannot move in the middle of farming season,” he said, adding that much larger plots of land would be needed to allow the villagers to put food on the table.

Dam Pang, another villager at the meeting, said his family would not relocate to the new site on show to officials yesterday, as HPLS2 had only guaranteed they would maintain the properties for one year.

“Although they are offering a lot of money, we will not move. If they open the dam to flood the villages, I will make a raft to live on from bamboo.

If the Vietnamese can live in them [floating villages], I should be allowed, too,” he said.

Keo Vang Iv, a representative of HPLS2, said that he would guarantee the quality of the villagers’ new homes for up to four years, and after that, maintenance of the relocation site would be handed over to the Ministry of Mines and Energy.

“We encourage people to accept one of our wooden houses, because it can be expanded as their families increase in size,” he said. “We will consider their points and promise not to take advantage of them.”

Ith Praing, a secretary of state at the ministry, said he would ensure that the villagers’ gravesites were properly relocated to the new sites and would also offer 20 kilograms of rice annually per person.

“I can promise to guarantee the homes for one year in case they collapse, but this promise is without documents.

If there’s a problem, they can complain to the ministry. I promise that no cheating will take place.”

He added that at the new location, there was about 2,500 hectares of forest, which the community could use as a source of income.

Doung Pov, Stung Treng deputy governor, said that no force would be used on the villagers if they did not relocate voluntarily.

“They are willing to die, but we are not going to let them die . . . No one will force or drag them from their homes.”

The $800 million Lower Sesan II dam will block the Sesan and Srepok rivers when complete, creating a 36,000-hectare reservoir and displacing thousands of people.

Meach Mean of the 3S Rivers Protection Network urged the authorities to change their minds and put their pledges into writing because “when problems occur, the people will have no evidence” of the agreement.