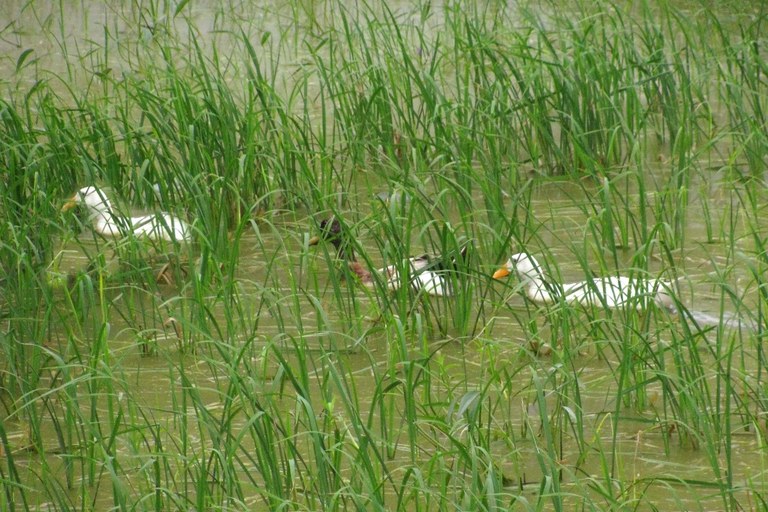 Uttar Dinajpur, West Bengal, INDIA – At the crack of dawn, Lipi Basak and her sisters Smriti and Mamti are already out of their home, with a group of quacking ducks ahead of them. It is raining. The road is muddy with small puddles. But this does not deter the feisty young women from reaching their ultimate destination – paddy fields about a kilometer away.

Once there, the ducks – eighteen of them – merrily glide onto the paddy ponds flapping their wings, wading past the tender saplings about one and a half to two feet tall. “They have been brought here with a purpose,” says Lipi, a homemaker turned farmer from Keotal village in Uttar Dinajpur district of West Bengal.

“The ducks eat up the harmful pests and weeds from our fields. Their droppings make the soil fertile. This saves us from using chemical fertilizers, herbicides and insecticides and their escalating costs,” she says.

For the Basak sisters, who are in their twenties, it hasn’t been easy.  They recall being mocked by fellow villagers and family members for leaving their traditional roles at home three years ago. Agriculture is still predominantly a male reserve in India

The sisters also chose not to follow the beaten track of high yield chemical intensive cultivation, conventionally practiced by the rest of their family for decades. Instead they chose organic farming integrated with native, climate friendly practices. 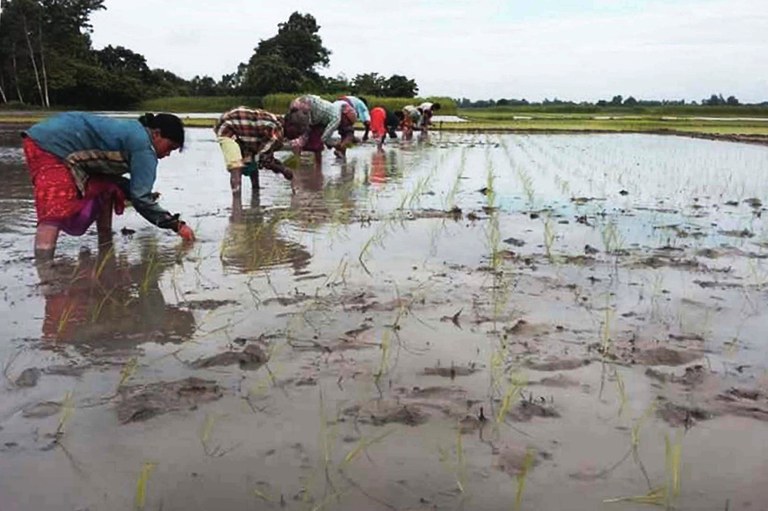 Holding on to their Convictions

The transition went through various trials and errors for these upcoming women farmers. During the first year their output was not satisfactory, bringing criticism from family members on the future of their organic farming. They held onto their convictions and production increased. The sisters said they succeeded in raising about 35-40 quintals of organically grown paddy in 5 bighas (0.66 hectares) of land during the last season.

Similar success stories come from at least 75 women in Keotal and its neighboring villages of Dohole, Abhinagar Uttar Palaibari and Balaoul under Itahar block of Uttar Dinajpur district in the state. They have named their group as “Narishakti Jaibochasi Mahila Dal” (NJMD) which translated to English means “Woman Power Through Organic Farming.” 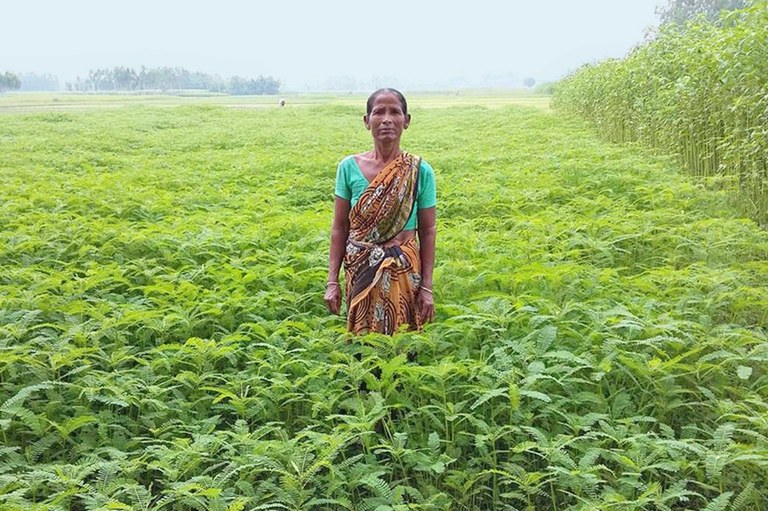 Largely a self-driven organization, its members have pooled their land together, cultivating chemical free paddy and other crops in 45 bighas (6.02 hectares) of land.

According to Mousumi Basak, who leads the fiery brigade of women farmers, their productivity figures are approximately 87 percent of the high yield crop average in the same area. “But considering our low cost/zero cost inputs in comparison to the chemically grown rice, our profits per bigha is higher,” says Basak.

This model of cultivation could be replicated across the country. According to the 2014 agriculture census report, nearly 67 percent of India's agricultural land is held by the marginal farmers with holdings below one hectare. The state of West Bengal has 96 percent small farmers whose average land holding is only 0.77 hectares.

“The potentials are thus tremendous,” says Basak.  A high school dropout, she is a storehouse of soil friendly and pest preventing natural recipes. “My lessons are not from books but based on our heritage that is replete with such traditional ingenuous knowledge,” she says. “But unfortunately, they have faded into oblivion following the advent of green revolution during the 60’s leading to mono cropping, done with constant use of chemical pesticides and fertilizers,” she says. 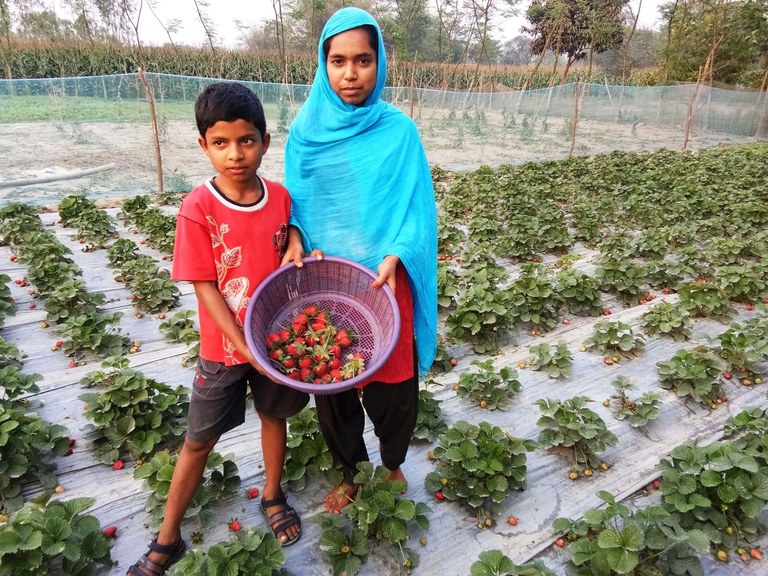 A farmer displays strawberries from her field / Credit: Moushumi Basu

What shaped Basak’s thoughts and introduced her to “clean” farming was the Forum for Indigenous Agricultural Movement (FIAM) – a grass roots organization of farmers, environmentalists and experts in North and South Dinajpur districts of North Bengal.

As an active member of FIAM for the past six years, she became an expert on the preparation of natural pest repellants, fertilizers, nitrogen fixers in soil. While she was keen to promote their use in her village, there were practically no takers, as nearly 95% of the farmers believe in and continue with chemical paddy cultivation.

When the men did not heed her, Mousumi went ahead to motivate the homemakers instead. She went door to door and persuaded them to go organic, at least in the interests of their family’s health. First she prepared natural pesticides and fertilizers herself at home. Over time she inspired young homemakers such as Lipi and Mamti to become members of her group.

Mousumi’s efforts are paying off with the revival of various indigenous and organic techniques of cultivation by her group members. Paddy duck farming is being practiced by at least 40 out of 75 members of “Woman Power Through Organic Farming” (NJMD).

He points out that the paddy field should be able to retain six to nine inches of rainwater for at least 100 days and seedlings should be planted at least 15 to 18 centimeters away from each other for ducks to wade through in between them. Their movement shakes the developing shoots, which stimulates growth.

“The ducks and seedlings should be around the same age and it would be a pleasure to watch them grow together,” he says.

Chatterjee believes that this integrated system creates a symbiotic relationship. These aquatic birds get a nutritious diet by feeding on various insects, weeds and their seeds from the paddy fields, which in turn get enriched by their droppings.

“All these factors lead to increased rice productivity by at least 10% to 20%, with plants found to grow taller bearing more number of grains per panicle besides more filled grains and net yield,” he says.

But most importantly, according to Chatterjee, rice-duck technology reduces emission of methane – the greenhouse gas causing global warming. According to an Intergovernmental Panel on Climate Change report agriculture globally accounts for 50 percent of methane emissions, with rice cultivation contributing to 11 percent alone.

The ducks move through the paddy fields and plough the water laden land with their beaks, until it becomes soft and muddy. This loosens up the soil, making it more aerated, thereby increasing dissolved oxygen in the surface soil and water of paddy fields that enhances aerobic decomposition of soil organic matter. Alternately, methane gas is released when such activities take place in anaerobic conditions in the absence of oxygen. The duck paddy system is an ideal solution to fight climate change locally and ensure food security, he says.

Upbeat with the efforts of FJMD in this regard, FIAM has agreed to provide ten ducks to members this season, with the condition that they give back twelve ducks to the organization. These would be further distributed to new members.

Such support and encouragement have further buoyed the activities of the women farmers in their villages. 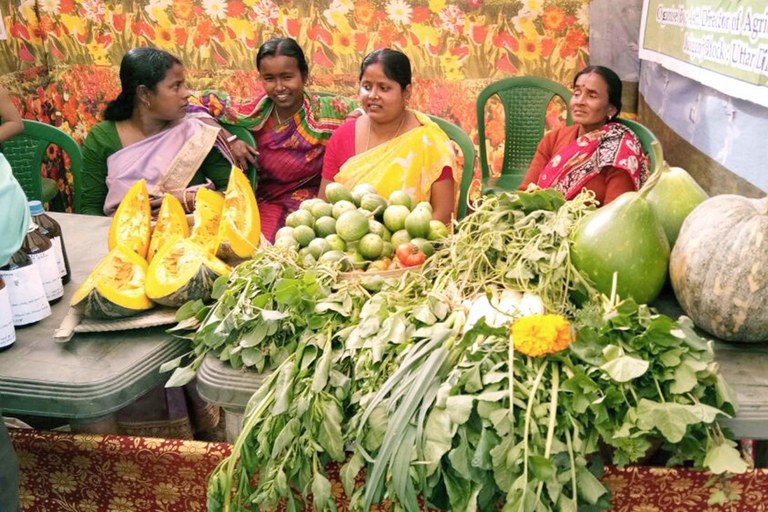 It is late evening and at least a dozen of them have assembled in Mousumi’s backyard after completing their household chores.  Some have brought neem leaves and grinding stones. Others have arrived with fresh dung and cow urine. Four of them get busy in preparing a paste of about two kilos of fresh neem leaves. Others are mixing up a kilo of fresh cow dung with two liters of its urine.

They are preparing “Neemastra” (weapon of Neem) – an effective pest repellant and anti-feedant, whose respective proportions have to be maintained for best results. The ingredients – especially the leaves of the Neem tree (Azadirachta indica) – are a powerful, natural insecticide, which does not damage the soil or agricultural ecosystem. 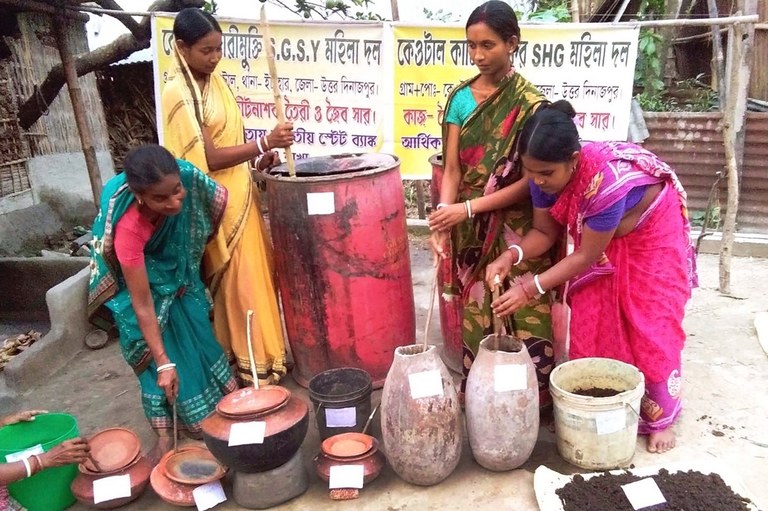 The mixture is emptied into a medium-sized earthen container and stirred vigorously. The pot is covered and left to settle in shade for 24 hours. Once the plants are sprayed with the solution, the harmful pests automatically move away, the members explain.

The women have a number of other “weapons” under their belt. Having fanciful names as Agniastra, Brahmastra, Amritjal, Sanharak, Panchogabba, Sanjeeba, these organic concoctions have compositions to serve specific purposes.

These natural alternatives come at a time in India when chemical fertilizer imports are surging with the use of synthetic pesticides to augment crop production. According to studies, residues of these chemicals have been found in a variety of everyday foods, causing dermatological, gastrointestinal, neurological, carcinogenic, respiratory, reproductive, and endocrine diseases in humans. High occupational, accidental, or intentional exposure to pesticides can also result in hospitalization and death.

The women farmers say that their naturally prepared pesticides don’t compromise human health for the sake of high yield. Agniastra (fire arm) is one of the most powerful natural pesticides they prepare. It is made with extremely bitter leaves of wild water spinach, very hot green chilies, garlic, and other ingredients, which are boiled in water till the solution is reduced to half. It is then strained and ready to use.

“In short, such regenerative organic farming is integral to climate solution,” says Sanjay Saha, assistant director of the district’s agriculture department, who has also inducted them in their training programs and workshops.

Not only are the technical experts praising their work, but even their own family members and villagers are beginning to take notice.

Narugopal Basak, a conventional farmer from Keotal, whose wife is a member of NJMD, says, “Though I am still not sure how far organic farming can sustain us, I am willing to give it a try.” Considering the health benefits and low-cost, he has decided to devote at least 1 out of his 20 bighas for chemical free cultivation.

With this the victory of NJMD does not seem very far. As more women break free from stereotyped chemical intensive agriculture to join the organic farming bandwagon, it becomes truly symbolic of new age women’s liberation for a worthy cause – to save the environment from impacts of climate change and add to food security.

This story is produced under the EJN Asia-Pacific Story Grants 2018 with the support of Sweden/SIDA. A version of it was first published in Mongabay India on July 26, 2018.