The transition from diesel to electric buses is key in the fight against climate change, but adopting a new technology that requires extensive infrastructure development calls for city and national governments to play a role

At the recently concluded Global Climate Action Summit in San Francisco, officials from several India cities proudly announced how many electric buses they had bought and ambitiously pledged to buy more.

“From 40 currently, we will procure at least 2,000 electric buses by the end of 2019,” said Arvind Kumar, transportation secretary of Telangana state in southern India. He also pledged that three-wheelers, including those that collect garbage, would eventually all be replaced by electric upgrades. 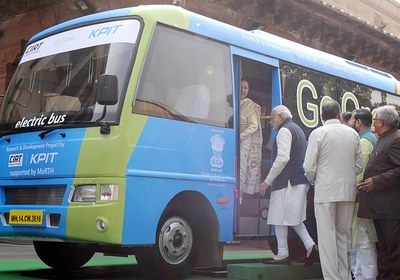 While the procurement process for 40 buses has been completed, only five are currently on the ground running.

Kumar spoke during a forum on climate action in India at the GCAS, an international gathering of city and state leaders, businesses and non-governmental organizations pledging to combat climate change.

Mukta Tilak, the mayor of Pune in western India, said her city of 4.4 million would have 25 electric buses by 2019, up from none at present, and that by 2021 all diesel buses would be removed from the city. The minister for transport in Tamil Nadu, R Vijayabhaskar, and the mayor of Ahmedabad, Bijal Patel, were also part of the discussion on electric-bus procurement.

The transition from diesel to electric buses is key in the effort to reduce carbon emissions that contribute to climate change.

One study by Niti Ayog and the Confederation of Indian Industry (CII) showed that heavy vehicles, including buses, were responsible for more than 65 percent of the total vehicular pollution and fuel consumption in Delhi, even though they make up only 2.5 percent of that city’s total vehicle numbers.

Though the study only looks at Delhi, its results can be largely extrapolated to the rest of the country, said Anumita Roy Chowdhury, executive director for research and advocacy at the Center for Science and Environment (CSE), a research and advocacy organization that campaigns for sustainable and equitable development.

Cities can’t do it on their own

Adopting a new technology that requires extensive infrastructure development calls for political will and a financially sustainable plan - which at the moment no transport corporation in the country has.

In Chennai, for instance, there are no set maintenance protocols. Buses are repaired only when they break down, but years of operating beyond capacity often leads to wear and tear that requires regular maintenance.

Currently, there are only about 40 electric buses owned by transportation corporations in India. That number is expected to go up to 500 over the next year, and up to 2,000 over the next five years, according to the World Resources Institute, a non-profit international research organisation. That compares to the roughly 150,000 diesel buses operated by state transport corporations in India, 30,000 of which are within city limits.

While cities such as Bangalore and Mumbai are leading the electric vehicle transition, they’ll need expertise and encouragement from that national level to speed up the shift, say researchers.

“The central government needs to help city transport corporations in tendering and procurement processes,” the CSE’s Chowdhury said. “Each city is finalizing their own contracts with different manufacturers and there is no set protocol.”

Some national schemes focused on clean public transportation, such as the Jawaharlal Nehru National Urban Renewal Mission (JNNURM) and the Atal Mission for Rejuvenation and Urban Transformation (AMRUT) offer subsidies for electric buses and fleet augmentation. But there is little support for building out the infrastructure, such as charging points in depots, required to run electric buses.

“Electric buses need to be deployed in shorter routes with higher frequency, which makes it easier for charging between trips,” Chowdhury noted. “For this, the depots that have charging points need to be chosen carefully. A corporation may also feel the need to deploy electric buses in central parts of the city where there [is] more congestion and higher pollution levels. The deployment strategies need to follow a standard protocol when more and more electric buses are introduced on Indian roads,” she added.

But cities can make inroads

As technology improves and costs for electric vehicles drops, the responsibility for getting those buses on the road and running falls increasingly to local governments.

“This transition is not a physics problem or a technological problem, but a political one,” said Ryan Popple, the CEO of Proterra, one of the biggest electric bus manufacturers in the US. “The technology exists for all challenges — including using electric buses in cities with steep inclinations,” he said. “What is needed is the political will.”

Shaky economics and the lack of technical expertise are prime reasons the Bangalore Metropolitan Transport Corporation (BMTC), one of the earliest transport corporations to show interest in electric buses, would rather take these buses on lease than make an outright purchase.

The corporation recently procured 80 electric buses using a subsidy from the central government that covered 60 percent of the cost. They are expected to be on the road within the next three months.

“Although we are training our technical staff for repairing and maintaining electric buses, we are not in a position to take on the full responsibility” for technical maintenance of the fleet, said the corporation’s managing director V Ponnuraj.

Currently, diesel buses cost around Rs78 per km to run — including fuel, maintenance and salaries for staff.

For electric buses, it is Rs57 per km with the government subsidy. But it’s more than Rs90 per km without it.

“If we want to scale up beyond these 80 buses, we will have to find a way to do it without the [central government’s] support,” said Ponnuraj. “We also need to improve our in-house expertise before we can confidently say that all new purchases will be electric. I think that would take seven or eight years for us to reach that stage,” he added.

With higher capital costs, despite subsidies, India is better off focusing on electrifying two-wheelers and three-wheelers, said Pawan Mulukutla, the head of Integrated Transport at WRI India Sustainable Cities.

“Most corporations are already bleeding. It is unfair to impose them with expensive technology,” he said.

“It helps transport corporations evolve their own solutions and the best models when it comes to procuring and operating electric buses,” he said. “Bangalore is being smart by getting buses on a contract instead of purchasing them directly like other cities have done.”