Every March 8, the world celebrates International Women’s Day to mark progress toward gender equality. Indigenous women, particularly in climate-vulnerable communities throughout the Philippines, suffer from tremendous poverty and discrimination, yet telling their story is anything but simple.

Victoria Tauli Corpuz, the Special Rapporteur on the Rights of Indigenous Peoples, believes that March 8 should be celebrated from a climate-change lens and include programs on climate action that strengthen indigenous women’s ability to adapt. 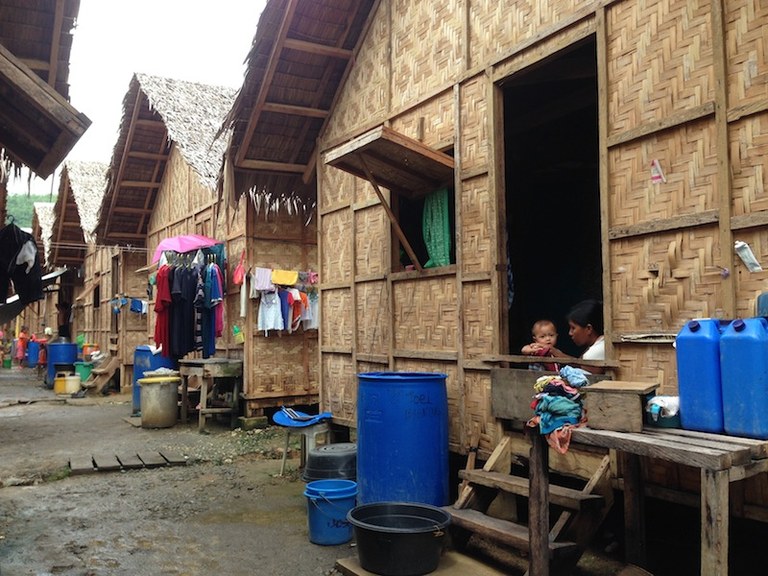 A relocation area in Tacloban City, one of the places hit hardest by Typhoon Haiyan in 2013 / Credit: Imelda Abano

“I call on governments to look into the impacts of climate change on women and to adopt policies and programs which will address the challenges they face and will face in the light of worsening climate change impacts,” Tauli-Corpuz told the Earth Journalism Network.

“Disaster risk mitigation and rehabilitation should also be done from a gender- and culturally-sensitive framework,” she said, adding that empowering women is a critical ingredient in building climate-resilience.

The Philippines is among the top five countries most affected by climate change, according to the Global Climate Risk Index 2018. Tauli-Corpuz, an indigenous leader from the Kankanaey Igorot people of the Cordillera Region in the Philippines, said involving women in disaster risk management will help tackle underlying risks of inequality and build resilience toward future disasters.

“I have witnessed and received reports of how indigenous women are disproportionately affected by the adverse impacts of climate change. When I speak to indigenous women, they say their roles as the key food providers, seed-keepers, caregivers, protectors of their lands, territories and resources are very much undermined because of climate change,” she said. 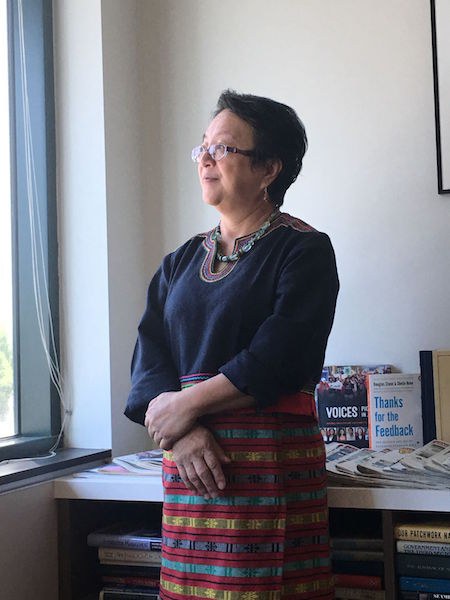 The most recent report from the United Nations Intergovernmental Panel on Climate Change (IPCC) estimates that the world has a window of only 12 years to keep the global temperature from rising a maximum of 1.5-degrees Celsius.

Even half a degree increase will significantly worsen the risks of droughts, floods, extreme heat and poverty for hundreds of millions of people. If this scenario were to play out, Tauli-Corpuz said indigenous women will suffer tremendously, far beyond the challenges they’re currently facing.

For example, with extreme heat comes increased vulnerability to mosquito-borne diseases such as dengue and malaria, and indigenous women will assume responsibility for family and community members who fall ill. Gastrointestinal diseases, which have increased as well because of the disappearance of clean, potable water from aquifers, further magnifies their care responsibilities.

In indigenous territories that rely on rain-fed agriculture, droughts and floods have changed the usual cycle of agricultural production and driven up food insecurity.

It has also been reported that incidents of violence against women have increased because of these developments, which increase stress and tensions within families.

“Indeed, indigenous women live in some of the most fragile environments, and these areas are dramatically impacted by climate change. As disasters are on the rise, so is the care burden of indigenous peoples,” Tauli-Corpuz said.

For Joan Carling, an indigenous rights activist and environmental defender from the Philippines, International Women’s Day, should be a chance to acknowledge and celebrate the important role indigenous women play as stewards of the environment.

The knowledge indigenous women have about food security and building community resilience are vital in addressing climate change, said Carling, who is also the co-chair of the Indigenous Peoples Major Group for Sustainable Development.

“However, indigenous women continue to experience violence and discrimination in different forms and by the adverse impacts of climate change. It is thereby imperative to break up the structures creating these conditions and recognize, support and empower indigenous women to be at the front and center of decision making and actions to save our planet and achieve sustainable development for all,” she said. 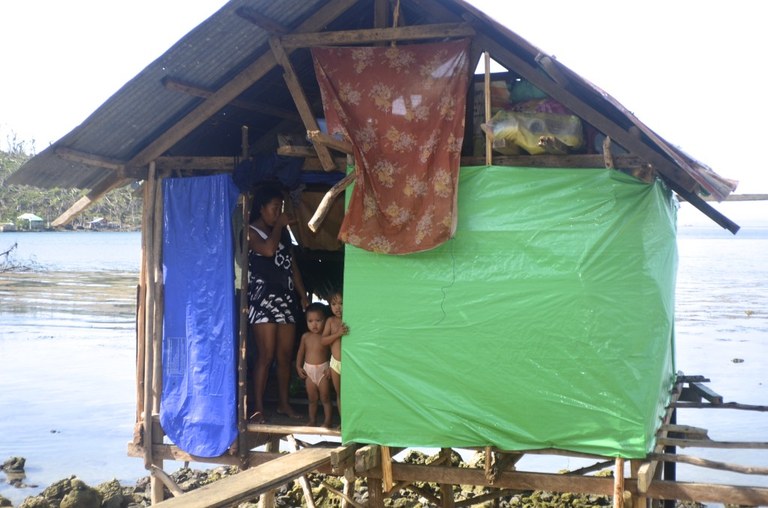 Whether they are part of the indigenous communities or not, women in the Philippines are consistently identified as one of the groups most vulnerable to natural hazards and climate change. Back in 2013, Typhoon Haiyan (locally known as Yolanda) hit the country, generating a storm surge of up to five meters. More than 6,000 people were reported dead and more than 1,700 missing. Across nine of the country’s poorest provinces, more than 14.1 million were affected, mostly women and girls.

Based on a 2018 report on Typhoon Haiyan from the International Federation of the Red Cross and Red Crescent Societies (IFRC), women suffered an increased risk from sexual violence, sexual exploitation and abuse and trafficking after the typhoon. It noted an increased risk for sexual violence due to inadequate lighting in temporary housing and a lack of private bathing facilities. Samar and Leyte, two of the most affected provinces, are historically known for trafficking and risks in these areas were exacerbated due to economic vulnerability among the population, the report said.

The Department of Social Welfare and Development (DSWD) and police authorities in Tacloban City have acknowledged a spike in the number of reported incidents of violence against women and children, including exploitation, disempowerment, and deprivation triggered by the disaster. They said more and more victims are now slowly coming forward.

One of them is 28-year-old Elena (not her real name). She was trafficked from her village and taken to Manila, where she was forced to work in the sex trade. She eventually escaped and returned to Tacloban City, but her case remained unreported because she has been too afraid to file a police report.

Then there is Myrna (not her real name), a 21-year-old sales girl from Marabut, Samar. She said she was raped a month after Yolanda struck her village by a mask-wearing man who pointed a knife at her and dragged her to a dark, muddy street.

“I could not breathe or shout for help. He was so powerful,” she said. “I just prayed that someone would rescue me. Nobody believed my story after that. I even tried to report the assault to the police, but everybody seems pre-occupied with the chaotic situation we were in.”

With the recurring natural disasters in the Philippines, women and children face heightened risks of abuse, exploitation, and violence, according to Carmela Bastes, Center Head of the DSWD in Tacloban City. 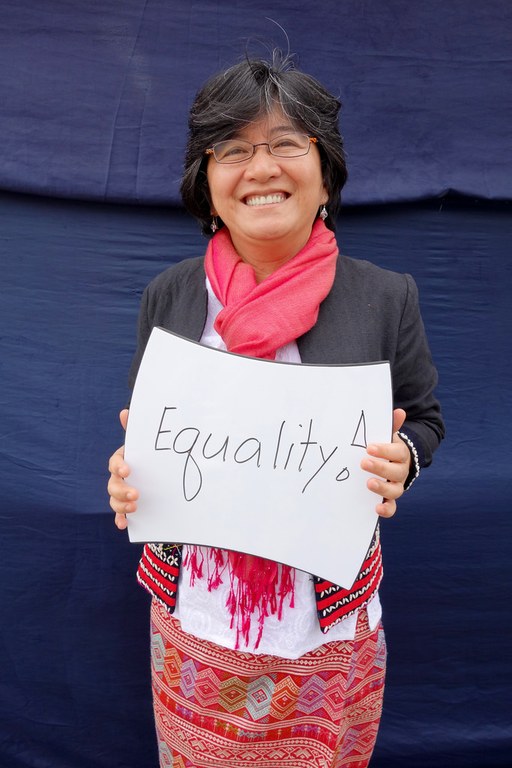 Joan Carling is a recipient of the UNEP's Champions of the Earth Award for promoting the environment and the causes of indigenous peoples. / supplied by Ms Joan Carling

Cases of abuse and violence alarming in typhoon-affected areas

From 2013 to 2015, there were 85 reported cases of violence and sexual abuse against women, Bastes said. The numbers are significant, she noted, because they were typhoon-related sexual assaults. She said there were more than 40 cases of human trafficking involving women and children.

Bastes believes cases of gender-based violence are increasing because people have been more informed of their rights and now know it’s not bad to file cases against perpetrators.

Despite increased awareness, police officer Karen Gabon of Tacloban City’s Women and Children Protection Desk, said reports of crime and violence against women and children are difficult to collect as victims fear for their safety or because they consider their family’s dignity.

“Many cases of abuse and exploitation are unreported and we are trying to implement now an effective reporting system for violence,” Gabon added.

Bastes said DSWD has reactivated desks dealing with violence against women in the city’s 138 barangays to assist the victims in accessing services and legal protections and in addressing the issue of gender-based violence in the community.

“Gender-based programs are important especially in disaster-stricken areas like in Tacloban City because people are disorganized and there are those who take advantage of their situation. We highlight the gender-based violence program because we know that women and children, as well as persons with disabilities, are the most vulnerable,” she stressed.

Trainings, information drives, monitoring in temporary shelters and permanent housing must be sustained in order to address the problem, Bastes added.

DSWD has been collaborating with other government agencies as well as international and local non-governmental organizations to implement programs such as training barangay officials, volunteers, and facilitators in temporary and permanent shelters, and monitoring of cases of abuse. 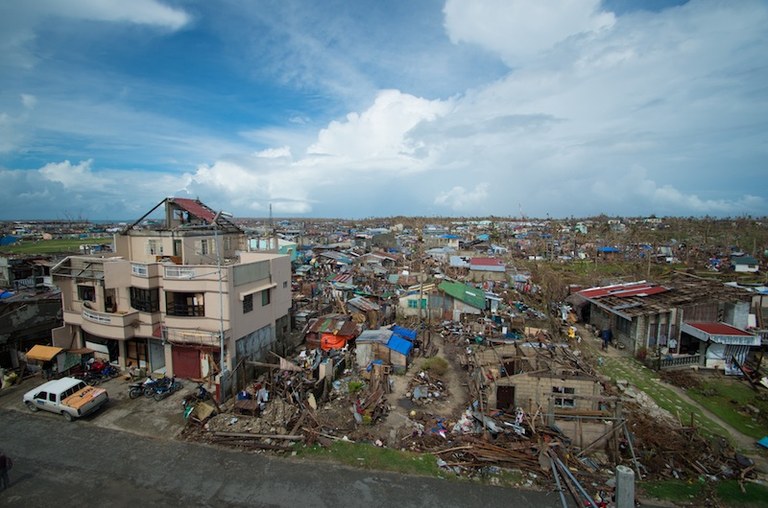 Jemel Millanes, a gender specialist at CARE International, also emphasized that a specialized support system for women and children who are impacted by natural disasters is needed as they are uniquely vulnerable.

“These are crucial to building women’s capacity to change lives,” Millanes said.

An evaluation of CARE International’s Yolanda response program released in September 2015, highlighted the importance of gender equality and disaster risk reduction as well as the need to promote women’s right to food, shelter, and livelihood recovery components.

Gender equality integration should continue to focus on economic empowerment and improving the self-esteem, confidence, skills and knowledge of women, according to CARE.

In the meantime, Elena, Myrna, and the other women who lived through the multiple impacts of Yolanda have to cling on and continue to survive for the sake of their families.

“I think it is important for women to be respected, especially in times of crisis like this,” Elena said. “There needs to be a safe space for us as we live in fear of being abused, molested, and violated of our rights.”

Imelda V. Abano is EJN's Content Coordinator for the Philippines and Pacific.