"I need to let the land take a rest. Already the leaves were getting smaller and smaller season after season,’’ she said, explaining why she ceased planting Virginia tobacco for the Philip Morris Fortune Tobacco Corporation, or PMFTC, in 2018.

"No matter how I followed the farm technician’s instructions, the plants wouldn’t grow as much as they did in the first three seasons,’’ she added. 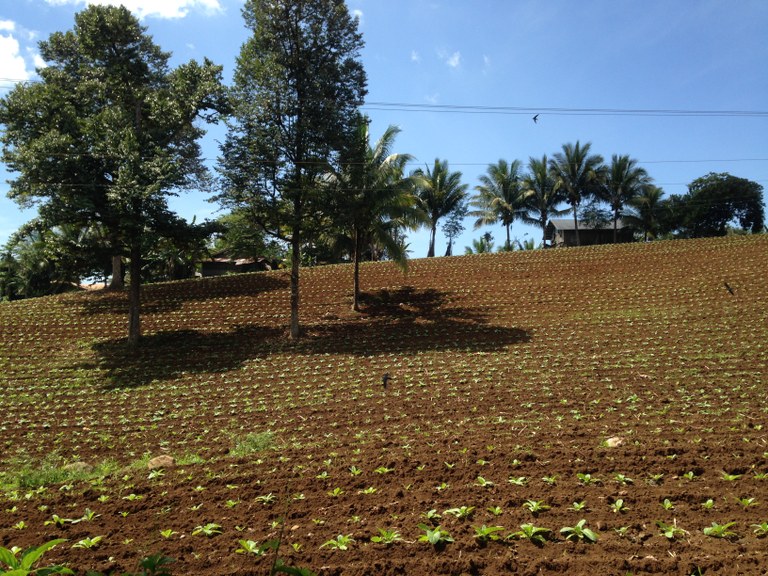 A field of newly transplanted Virginia tobacco in Barangay Anei, Claveria, Misamis Oriental. The production of these plants fell to a million kilograms in 2018 as only 336 farmers planted the crop across 436.21 hectares, down from 1.87 million in 2017 with 1,117 farmers who grew the variety over 1,387 hectares / Credit: Lira Sagaral Reyes

Gamalo, 73, has been a contract grower since 2014. She had planted eight times -- twice each year -- on her upland two-hectare field in Barangay Madaguing, about 59 kilometers southeast of Cagayan de Oro.

"No matter how I talk and sing to the plants every day, they seemed not to believe me anymore,’’ she added in jest.

As a Higaonon, an indigenous people, she speaks of the land as a sentient being. "It must be tired already. Like human beings, the land also needs to recharge," she said.

Gamalo hopes that by letting the land lie fallow for months its soil can gain back the nutrients depleted by tobacco.

The PMFTC had introduced farming technologies that allow the year-round cultivation of a variant of tobacco that befits this upland farming town’s climate and soil.

Gamalo was among the 851 planters of Virginia tobacco who, under a 2017 contract with PMFTC, quit last year and let the land lie fallow, or planted other crops like vegetables, cassava or Bt corn.

Under the contract, the company buys the fresh leaves and flue-cures them at curing barns in its own seven-hectare facility in Barangay Ane-i.  Since 2013, it has engaged farmers here as contract growers, providing farm inputs like fertilizers and pesticides on loans as well as technical support and training for sustainable and safe agricultural practices.

Based on data obtained from the field office of the National Tobacco Administration (NTA), only about 366 of the previous year’s 1,117 farmers in Claveria grew the cash crop in 2018 over roughly 436 hectares, down from 1,387 hectares in 2017.

Gamalo’s neighbor Gliceria Mission and her husband Felipe are thinking of shifting to other crops like corn, which they used to grow aside from tomatoes and squash. But unlike most of the contract growers in Madaguing, they persisted to grow tobacco as they still wanted to pay for agrochemical inputs loaned by the company.

"The produce was good in the first three planting season, but onwards it has been a failure," Mission told the Mindanao Gold Star Daily.

Like Gamalo, she complained of smaller leaves that weighed less. While the selling price of tobacco has increased, the leaf quality standards were upgraded, and this, ironically, had resulted in much lesser income for farmers like her, Mission added.

She had hoped to begin harvesting some mature leaves the day this reporter visited, but her husband foresaw that the harvest might not be enough to pay for two leaf-pickers so they postponed, risking over-ripeness and a lower price for not meeting the company’s leaf-quality standards.

Mission said she looks forward to paying the couple's debts to the company, and then she would stop growing tobacco because of the land’s infertility, buying price fluctuations and health issues. She reported having symptoms of green tobacco sickness.

"This is the only plant so far that had me experience various kinds of illnesses. I itched everywhere, and I had headaches afterwards and felt dizzy and intoxicated,’’ she said. This, even as she wore protective gear such as a mask, rubber gloves, goggles, rubber boots, and jackets that were provided by the company.

Green tobacco sickness is caused when the skin absorbs nicotine, a chemical present in tobacco leaves. Its symptoms include nausea, vomiting, headache, severe weakness, stomach cramps, chills and sweating. It can also cause changes in blood pressure and heart rate.

Gamalo, on the other hand, attributed the never-healing sores on her lips to tasks like topping and de-suckering, though the doctor told her it is an allergic reaction to other substances, not nicotine.

"I’ve got beautiful lips till I grew Virginia,’’ she said with a laugh, adding that she does these tasks herself so she doesn’t have to hire farmhands.

She said she followed safety instructions and wore protective gear but could not stop herself from the years-long habit of wiping sweat from her face with her hands. Gamalo said she had been prescribed cetirizine, a steroidal anti-allergy drug, during a medical mission sponsored by PMFTC way back in 2015, but she had stopped using the medication as she was told by a health officer that continuously using it will weaken her bones.

Conducted in 2016, three years after tobacco’s commercial cultivation began here, the study looked at the knowledge, perceptions and practices of women working in tobacco farms in Claveria. Among its findings is that 90 percent of the women workers were aware of the health impacts of cultivating the plant.

Dr. Dennis Mugot, the study's lead researcher, compared the results with a similar study in China, the world's largest producer of tobacco, which showed that only 43 percent of women farmers there were aware of the impacts on their health.

In an interview with Mindanao Gold Start Daily, Dr. Mugot noted that this high degree of awareness among women on health impacts, according to farmers, is due to orientation sessions PMFTC held for farmers and workers as part of the contract-growing training package.

Dr. Mugot said the study was part of the Gender and Development program of the College of Arts and Sciences, and he hoped to expand the survey to include more respondents and to include women’s perceptions of the impacts of pesticide use and exposure.

This is the first part of a two-part series that looks at the environmental impact of tobacco growing on women farmers in the southern Philippines. It is adapted from the original story, which was published in the Mindanao Gold Star Daily on Feb. 14. To read Part 2, click here. 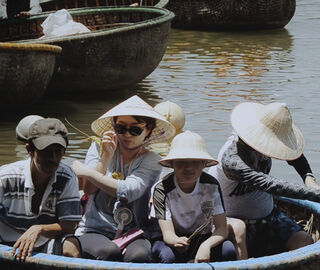