Scientists who recently completed the first-ever expedition to drill the world’s highest glacier have bad news ahead of the 24th Conference of Parties to the United Nations climate change meeting in Poland next week. Glaciers in the Himalayas, the main source of the rivers that sustain billions of people in Asia, may be more sensitve to tempereture rise than expected.

Though many studies have been carried out on the surface of the Khumbu Glacier, whose ice is sourced in the Western Cwm of Mount Everest, and other glaciers in the region, nothing was known about what was going on inside "the highest glacier in the world," said Katie Miles, the lead author of a recent paper that described the work conducted by members of the EverDrill Project between 2017 and 2018.

The group spent two seasons (six to eight weeks each) drilling 27 boreholes into the Khumbu Glacier using a jet of hot, pressurised water to cut into the ice – the longest hole was 192 meters deep.

“These boreholes are the deepest and most spatially extensive achieved to date in the Himalaya using hot-water drilling,” says Miles.

The glacier's internal structure was then documented using a 360-degree camera.

Once the boreholes were drilled, the team measured ice temperatures by installing strings of pre-built thermistor sensors linked to data-loggers located at the surface.

The set of equipment was left onsite for six months and collected in November 2017. 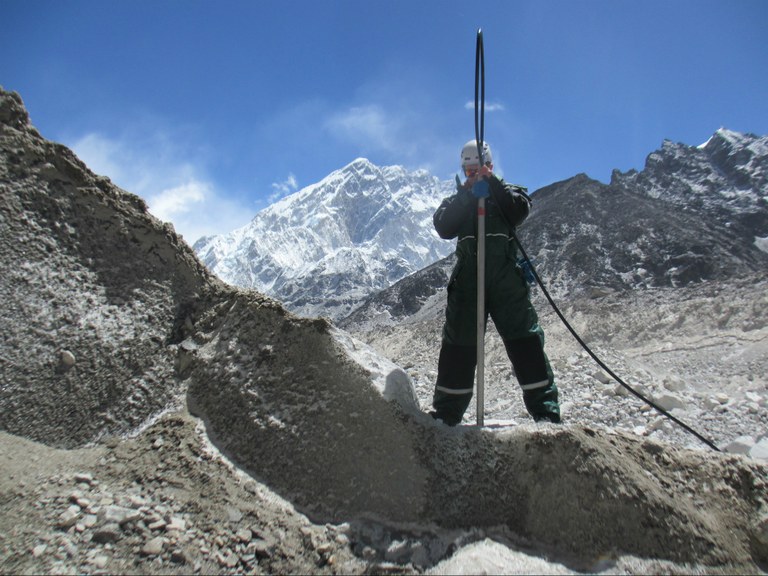 “It has been shown that air temperature increases are amplified at high elevations, and this study also suggests the same,” says Miles. She says there is evidence that a global temperature rise of 1.5°C would result in a 2.1°C warming across High Mountain Asia.

“In the context of the study, such a rise would mean a significant loss of ice mass across the region,” she says.

Miles suggests that if other glaciers in the Himalayas are also experiencing a similar phenomenon, they could be losing mass at a rapid rate.

“If that is happening, then the volume of meltwater will increase until the glaciers lose its mass,” she says. This might result in an inital increased flow of water downstream. But that flow may dry up once the peak water mark is reached. That outcome could have huge effects on Nepal, a country that is heavily relient on hydropower. 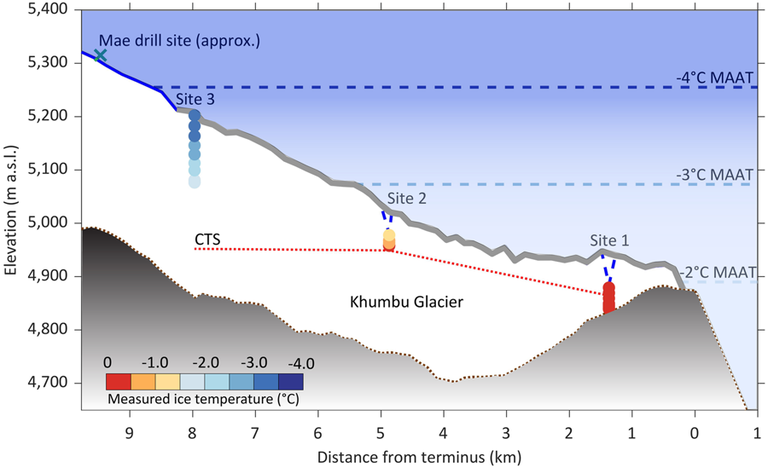 Illustration along the profile of the Khumbu Glacier showing the ice temperature values recorded by each thermistor within the three boreholes / Credit: Nature

Miles cautions, however, that what is happening in Khumbu may not be representative of all glaciers in the Himalayas. Khumbu and many other Himalayan glaciers are covered with debris, which act as a blanket over the glacier. This debris insulates the glacier from warmer air temperatures, reducing melt rates. But the debris gets thinner on glaciers located on higher altitudes.

“These ice temperatures will now be fed into an ice flow model to better predict how the Khumbu Glacier will respond to projected climate warming in the future,” she says.

Meanwhile, the Nepali delegation heading to Poland says it will make sure the issue is not ignored.