The island nation of Fiji has taken a lead in addressing climate change in the Pacific region – and much of the world. That much was clear last month, when Prime Minister Frank Bainimarama hosted a Talanoa dialogue at a major climate summit in San Francisco with a group of global leaders.

Talanoa is the Pacific way of sharing stories. Fiji launched the Talanoa Dialogue at the 23rd Conference of Parties to the United Nations Framework Convention on Climate Change in Germany to help countries achieve the goals they committed to under the 2015 Paris Agreement, a landmark accord aimed at addressing global warming. 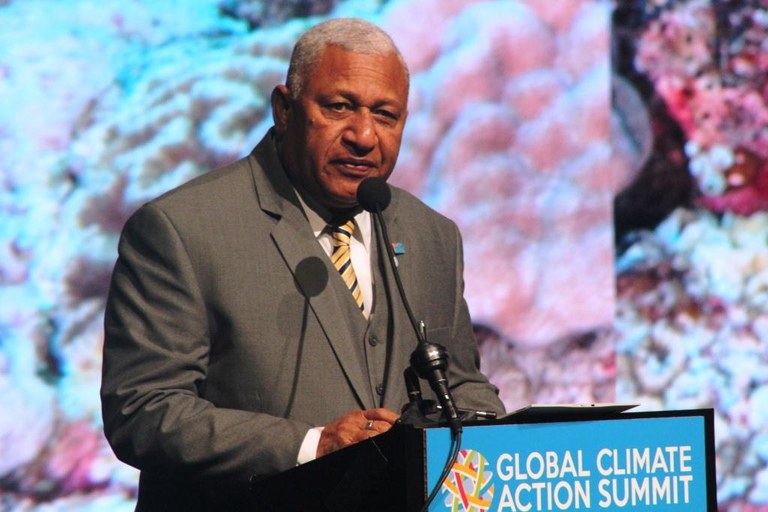 But its more than just talk, said Bainimarama.

“Talanoa is storytelling for a purpose. And the stories we’ve heard and the scores of others that have taken place around the world – aren’t just talk, they’re tools,” he said.

“Tools that can be used by political leaders to increase climate action at the national level.”

At the Global Climate Action Summit in mid-September, high-level participants shared their experiences and insights, in the spirit of Talanoa, on what is needed to strengthen and expand public- and private-sector partnerships to rapidly reduce global greenhouse gas emissions.

The session, which was hosted on the first day of the GCAS, helped set the scene for the rest of the summit. It also contributed to the development of key messages to be presented at the political phase of the Talanoa Dialogue during the next Conference of Parties (COP24) in Poland in December.

“Talanoa is storytelling for a purpose. And the stories we’ve heard and the scores of others that have taken place around the world – aren’t just talk, they’re tools." - Frank Bainimarama

Bainimarama said that as a Pacific Islander, he is extremely proud to host the dialogue – one that has captured the imaginations of the world.

“Our Talanoa Dialogue brings the story-telling tradition of our islands to bear on the challenges of understanding how we can be more ambitious in our collective responses to climate change,” he said.

Bainimarama also acknowledged California Governor Jerry Brown, whose state hosted the GCAS, for his leadership in the climate struggle.

Regional dialogues will inform a global one
In July, Fiji hosted its own climate summit called the Climate Action Pacific Partnership (CAPP), which attracted leaders from across the Pacific-Island states.

Officials and representatives from business, civil society, science and the global investment community met to discuss ways to strengthen the region’s resilience to climate change and further reduce its already low carbon emissions.

Heads of government in attendance were the President of Nauru and the Prime Ministers of Vanuatu, Tuvalu and the Cook Islands, with senior ministerial or government representation from other Pacific countries. Senior representatives from Australia, New Zealand and Canada were also present.

Fiji's Minister of Agriculture, Rural and Maritime Development and National Disaster Management, Inia Seruiratu, hosted the two-day CAPP event, part of a program of activities among the High-Level Champions appointed under the Paris Agreement.

“Our ultimate objective with the CAPP is to help mobilize the partnerships and investment needed to accelerate climate action in the Pacific,” Seruiratu told regional reporters covering the CAPP.

The aim, he continued, is not only to increase resilience to climate change in the region, but also to support global efforts to keep global warming within 1.5 degrees Celsius, a widely accepted benchmark for global temperature increase.

“This is a critical opportunity for the Pacific to send strong and unified messages about the need for greater resilience, ambition and urgency, both within our region, but also at the global level,” Seruiratu, said.