Fishing in Fiji under strain

Fishing in Fiji under strain

Growing up in his settlement in Nadi, western Fiji, Sundar Lal said the nearby creeks, rivers and foreshore areas held an abundance of fish, crabs and prawns.

"We never returned empty-handed," he recalls.

In Tunalia, fishing provides both an important source of protein and extra income, and much like communities across the Fijian archipelago, it holds deep cultural, economic and dietary significance.

Pacific marine scientist Professor Joeli Veitayaki said Fijians have relied on the sea as a food source for centuries. The country’s current annual fish consumption at 44 kilograms per capita, is above the world average, according to the Asian Development Bank.

Fiji’s fish-rich tropical waters are supported by an abundance of seagrass and the world's third- longest barrier reef system, the Great Sea Reef, extending 200 kilometers from the western coastline of Viti Levu all the way to the northeastern tip of Fiji's second-largest island, Vanua Levu.

Lal and his family are among the many beneficiaries of these rich fisheries. But Lal is increasingly concerned about a trend he has noticed in the last few decades.

"We're not catching fish like we used to,” he says. “We are having to go further out [to sea] than before.”

Inshore fisheries, largely unmonitored and unregulated in Fiji have been under sustained fishing pressure for decades.

The reasons range from rising populations—resulting in increased fish consumption—to increased poverty, with more people turning to fishing to survive. The United Nations Food and Agriculture Organization estimates that there are around 30,000 subsistence fishers in Fiji, including 50% of all rural households. Women make up more than 80% of those 30,000 fishers.

The stress on fishing is greatest during times of economic hardship caused by political upheavals and/or natural disasters, as past reporting shows.

For instance, in some parts of the country entire sugar cane farming communities have turned to fishing after being displaced as a result of expiring native land leases.

More recently, there has been a noticeable increase in fishing due to the COVID-19 pandemic, as 115,000 newly unemployed citizens have turned to the sea to make ends meet.

Notably, a 2014-2018 study on the spawning potential of 129 inshore species by the Wildlife Conservation Society (Fiji), Ministry of Fisheries, World Wildlife Fund and the University of the South Pacific (USP), found key fish stocks across Fiji in crisis. Specifically:

"Our results suggest an urgent need to reform the management of Fiji's reef fish stocks so that fish are not caught before reproducing; that they have had a chance to replace themselves and keep populations stable," the report concluded.

As part of efforts to assess the situation, this Earth Journalism Network-USP Journalism investigation involved a three-day trip around Viti Levu to meet fishers, fish vendors and coastal communities.

Everywhere the story was the same: increasing costs and dwindling catches, with fishers having to travel further out to sea for a reasonable haul.

"We used to find big fish near the shore and the reef, but not anymore," says Suren Chand, a fisherman from Ba.

Recently, Fiji's Fisheries Minister, Semi Koroilavesau, cited studies indicating that in the 1980s, fishers fished for a maximum of two hours to feed an entire village. By 2000, longer hours were needed, even to meet individual household needs.

During the Viti Levu round trip, little seemed wrong on the surface.

Numerous fish vendors with abundant stock were encountered every few kilometers along Fiji's 500km main highway, selling a variety of species from makeshift stalls, as well as families hawking from front yards.

Despite the high prices, most vendors reported brisk sales of up to $FJ300 (US$146) on a good day.

In the town centers, there was abundant stock at the vibrant municipal fish markets and inside the freezers of the various supermarkets and smaller corner shops.

But looks can be deceiving, with study after study detailing the consequences of decades of sustained pressure on inshore fisheries.

According to a 2009 University of British Columbia report, 70 of Fiji's approximately 400 qoliqoli areas (traditional fishing grounds) were over-exploited.

"In Fiji, certain fisheries are in a very bad state due to continued overfishing, pollution and bad fishing practices," says Dr. Sangeeta Mangubhai, Director of the Wildlife Conservation Society, Fiji (WCS). Mangubhai identifies the capture of undersized, or juvenile, fish as a major contributor to the problem since it doesn’t allow fish populations to reproduce.

Several fish vendors interviewed for this story confirmed that the authorities did not check on size limits, let alone enforce them.

“Small fish are sold openly at the markets,” said Anish Naidu, who sells his catch at the Lautoka city market. “Nobody checks it,” he added.

Dr. Anjeela Jokhan, the former dean at the University of the South Pacific's Faculty of Science, Technology and Environment, says inshore fisheries are less policed because they are viewed as “subsistence” areas, meaning small money.

Mangubhai, says a holistic approach is needed to manage reef and coastal fisheries to ensure that stocks remain healthy for future generations.

"Fishing is not bad," she says.  "There are stocks you can fish at a certain level without depleting or crashing that fishery.

"But if you fish at sites where they reproduce; if you use too small a net and take out a lot of very small fish; if you don't follow size limits, that's a problem."

Mangubhai believes that there is an urgent need to update legislation on size limits and implement and police restrictions on dynamite fishing and the use of gill nets.

She points out that Fiji's Fisheries Act of 1942 was enacted when the country was a colony, with little scientific data available on size limits and vulnerable species.

"For some fish, the size limits are not adequate," says Mangubhai. "Then there's some fish that don't even have a size limit that really do need one."

There are some signs of hope. Since 2016, the Fijian Government has been working on a National Fisheries Policy for sustained growth in inshore fisheries as part of five-year and 20-year national development plans.

The government also places an annual four-month ban on the highly-prized grouper (Kawakawa) and coral trout (Donu) species during the breeding season from June to September.

But there are no restrictions on other heavily-harvested yet ecologically-important species.

This includes Parrotfish, which this investigation found was sold freely in all sizes and colours, both at the local markets and on the roadsides.

Certain species of Parrotfish eat dead coral, and can also produce up to 320kg of sand every year, making them crucial for the reef ecosystem.

Recently, Jonathan Smith, a local diver and boat captain, posted pictures on Facebook of an apparently endangered variety of Parrotfish sold openly at the Labasa market in northern Fiji.

“These fish are very easy to shoot at night, which is why the species is declining,” he said.

The USP's Jokhan, who was overseeing a US$6.97 million (EU5.7 million) European Union-funded regional project on sustainable fisheries, has called for a major national awareness campaign to effect a "cultural shift."

"I'm a strong believer in working with communities—creating awareness and solutions that they can implement and take ownership of," she says.

Plenty of fish in the sea

Andrew Paris, another marine researcher at USP, agrees that there is a need for a change in thinking in Fiji, where there is no catch-and-release culture for undersized fish.

"There's an endless supply of fish—I have heard that saying in the villages," Paris said. But people in these villages are noticing changes in the form of diminishing fish supplies, he added.

Paris is among the experts considering traditional means of conservation that include strong community involvement.

"I know that in the iTaukei (indigenous Fijian) settings, certain totemic species were taboo to catch or eat," says Paris.

"Ten or 20 years ago, people were adhering to those traditional protocols but nowadays anything goes due to a capitalist-driven society where people are always in need of money."

Sitting under the shade of a big mango tree in Tunalia, Sundar Lal's face is creased with concern.

Fishing has long fed his family and supplemented his income but present trends are worrying.

His fears are not misplaced. While Fiji still reaps a decent harvest from its bountiful seas, how much longer this good fortune will last is unknown.

USP Journalism training consultant Sheldon Chanel is a freelance journalist who writes for various publications, including The Guardian and Al Jazeera. The Coordinator of the USP Journalism Programme, Dr Shailendra Singh, has written widely on Pacific issues, both as a journalist and as a media academic.

This investigation was produced with support from Internews' Earth Journalism Network. The story first appeared in the January issue of Islands Business magazine. It has been edited here for length and clarity. 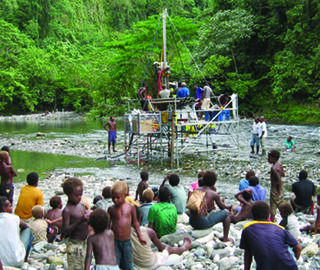 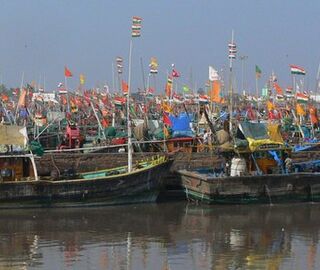