Floods and Other Extreme Weather Events Pose Dangers to Mothers and Newborns in Chennai, India

Floods and Other Extreme Weather Events Pose Dangers to Mothers and Newborns in Chennai, India

During the catastrophic Chennai floods in December 2015, Radhika KTP was 35 weeks pregnant and had to undergo an emergency Caesarean procedure to give birth to a premature child. She had an older child of five years at the time. When they had left for home from the hospital, little did Radhika know that she had to walk through the rising waters and waterlogged roads. The muddy water infected her stitches and she was suffering from throbbing pain. When they finally reached home, she saw her entire house was inundated with water. Radhika recollects, “All the shops were shut. The ATMs were not functioning. We felt like we were living on an island full of water. We survived on rice kanji (gruel) and water for three days. I was not able to breastfeed my newborn without proper food and nutrition for myself. We could not reach out for medical help also.”

It was with much difficulty that Radhika’s husband Jinoy Jose found a boatman willing to carry the family to a safer place. With Radhika’s infected stitches and their baby starving without breastmilk, the journey was terrifying. “It was just a wooden plank. We cannot call it a boat. The plank was shaky. We could see snakes, ants and other insects in the water,” she says.

Extreme weather patterns and impact in Bay of Bengal

Since then, Chennai has had several other extreme weather events. Climate experts say these events will only intensify in the coming decades. Chennai received a rainfall of 399 mm in five days compared to the normal rainfall of 40.6 mm for five days, a humongous 883% increase in rainfall according to the National Disaster Management Authority. The rains resulted in the death of 470 people, 12,000 heads of cattle were lost, lakhs of people were displaced and roughly 4.92 lakh houses were damaged in addition to heavy loss of public property.  As recently as November 2021, the whole city of Chennai was waterlogged with heavy rains. The state government said that 14 people were killed in rain-related incidents in Tamil Nadu in November 2021.

Climate activist Sundar Rajan of Poovulagin Nanbargal warns that sea level is rising at an alarming rate and most parts of Nagapattinam are already below sea level. “The Bay of Bengal plays a major role in India’s monsoon, weather, and climate. The sea surface temperature of the Bay of Bengal is varying between 29’C-32’C, where the ideal sea surface temperature is only 26.9’C,” he says, explaining that the Indian monsoon is one of the nine tipping points in climate change and any damages to that could become irreversible.

Dr Mrutyunjay Mohapatra, Director General, Indian Meteorological Department, known as the “cyclone man of India”, states that the impacts of rising sea levels are exacerbated by frequent cyclones and that the reduced speeds of the cyclones over the Bay of Bengal will lead to an increase in devastatingly heavier rains.

Another Chennai resident, Sowmya Loganathan, was five months pregnant and living in a hostel close to Adyar river during the flood. The hostel decided to shut down when water levels rose drastically. There was no electricity or phone network to contact her family. Just as she decided to leave for her friend’s place, her husband arrived at the hostel to check on her. Prabhu, Sowmya’s husband, still trembles when he says, “If I had reached her hostel a little late, she would have gone to her friend’s place at Villivakkam. It would have taken at least three days for me to know her whereabouts.” Prabhu was shocked to see his pregnant wife standing chest-deep in dirty water, with her bump completely submerged. Dead frogs and animals were floating along in the water. Even after reaching a safe shelter, Sowmya was afraid of being infected by the flood.

Many physicians and health professionals around the world believe that the climate emergency is going to be the greatest health risk to our humankind. A study conducted by the International Federation of Gynaecologists and Obstetrics recognises flooding as a widespread hazard that can have serious mental and physical effects on women's health owing to prolonged exposure to waterlogged and unsanitary environments, serious stress, anxiety, and depression, cultural norms that interfere with women's ability to survive floods, and food insecurity. Dr Karthick Annamalai, Neonatologist and Paediatrician at Coimbatore Children’s Healthcare, observes an increasing number of premature deliveries and intrauterine growth-restricted babies. “We are also witnessing babies with low birth weight, say 1.5 kg or 1.75 kg, at term irrespective of appropriate nutritional status and blood pressure. Such a growing number of fetal growth restricted babies and pre-term babies are at risk of internal brain bleeding, lung immaturity, low brain development, respiratory issues, low sugar, jaundice, and more.”

Effath Yasmin, International Board Certified Lactation Consultant, Founder, and Director at Nourish and Nurture, Mumbai points out that prematurity also impacts healthy breastfeeding practises, as preterm babies are unlikely to be able to “breastcrawl” and breastfeed in the first hour of birth. Her concern is that these incidences will lead to an increased risk of failed lactation. Research evidence indicates that offspring who have been exposed to in-utero effects of climate change have a higher risk of metabolic disorders, abnormal neurodevelopment, and higher rates of congenital defects. It’s not just mothers, but mothers-to-be, adds Yasmin, pointing to studies that indicate how climate change is one of the factors that affect hormonal development, and in turn affects the endocrine system and breast development in young girls, putting them at risk for reproductive health issues later on in life.

Another study on climate change and the potential effects on maternal and pregnancy outcomes, published by The National Center for Biotechnology Information (NCBI), USA.

The study links traumatic experiences with Perinatal Common Mental Disorder (PCMD) and postpartum depression. The study says mothers with PCMD are more likely to beget a child suffering from diarrhoea or a child with low birth weight which are risk factors for infant mortality.

Sowmya has still not gotten over the memories from the flood. She is nervous even after moving to another city. The fear of being stranded grates on her and she keeps herself prepared for a calamity. She keeps thinking about emergency evacuation methods. She always leaves her home with a fully charged phone so that any power interruption doesn’t disconnect her from her family. Six years later, Sowmya is not confident of raising her son Nilan Prabhu safely amid calamities. She has qualms about having another child for this reason.

Nilan has heard the stories about the flood from his mother. He is very angry that mosquitoes, frogs, and other insects had come near his mother. Even to this day, he is afraid of seeing footage of the floods on television. He fears that it might break through the TV and affect him. It is important to note that Nilan has never seen or experienced floods directly but experienced it in his mother’s womb only and in her retelling of it.

Radhika’s first son, Sangeeth, who was five years old during the flood, saw the flood water rising on his doorsteps. But he thought it would go away like every other time it rained. Unfortunately, this time it did not stop. He recalls the incident, “I looked outside, and the water was literally near our doorsteps. As if it was saying, ‘hello, my name is water. Can I borrow a cup of sugar or something?’” He says he wasn’t afraid during the flood but was afraid after. Whenever he hears a rumble of thunder or lightning, he fears that he might not escape this time around. “The whole episode was a nightmare for us. Whenever it rains, all those memories start replaying in our minds. We could not sleep for several nights. Amal’s recovery as a preterm baby took a longer time than we expected,” Radhika says.

Most climate models anticipate a 2-2.5 degree C rise in temperature by the end of the century, even if most of the political obstacles to climate action are removed. Despite coastal cities ramping up their disaster relief budgets or allocating funds towards climate-safe infrastructure, it is clear that the physical and mental health impact on women and children will need to be addressed, by communities themselves and by policymakers.

When we took the issue to Karthikeya Sivasenapathy, the DMK’s secretary of the environmental wing, he assured us of the government’s readiness to act after events such as cyclones and floods via disaster relief forces on the state and national level. “Gaja Cyclone in 2018 affected many lives and we sent relief materials from here. But we did not think of people’s displacement distress and psychological impacts regardless of the rehabilitation efforts. From next time onwards, we will at least write to the environmental ministry and Chief minister to include psychiatry in the disaster force, especially for the distress experienced by women and children,” he says. For policymakers to recognise the importance of this issue is a significant start.

This story was produced with the support of Internews’ Earth Journalism Network. It was originally published in The News Minute on 25 February 2022 and has been lightly edited for length and clarity. 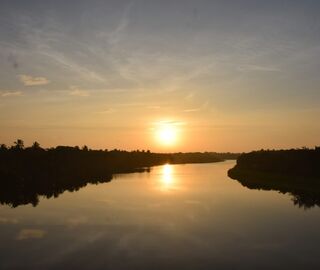 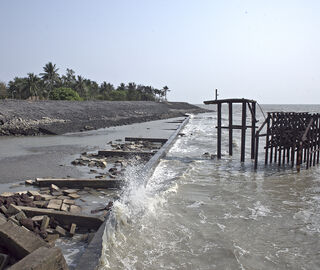 Sundarbans, India
No Emergency Healthcare for Delta Island Communities in the Sundarbans 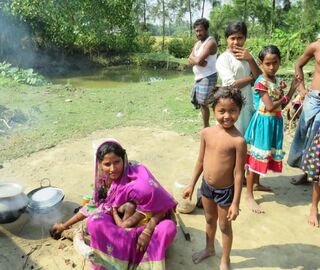 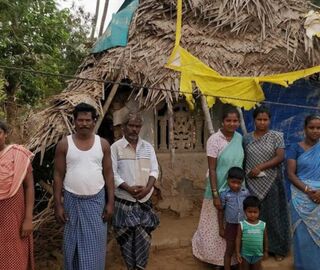