The creation of the South Atlantic Whales Sanctuary - an old claim made by Brazil and other countries - has never been so close to be approved. The proposal will be voted in the next meeting of the International Whaling Commission, in October.During the World Conservation Congress, that happens this week in Honolulu, Brazilian biologist Ugo Vercillo, one of the authors of the project, said that four more votes are needed in order to have the proposal approved (story in Portuguese). 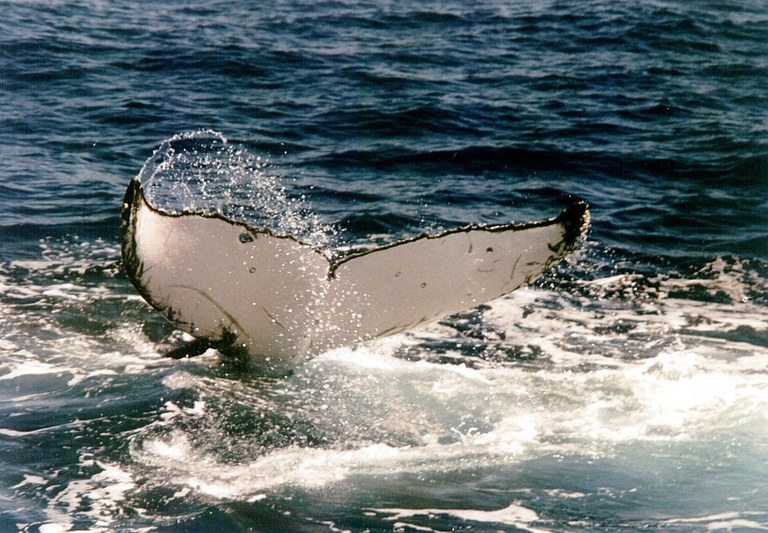 Humpback whale, which had 95% of its population reduced, would be one of the main species benefited by the creation of the South Atlantic Whale Sanctuary (photo: Rainer J. Wagner - CC 3.0 BY-SA)

Brazil has never come so close to approving the creation of a whale sanctuary in the South Atlantic, a longstanding claim of the country. The proposal will be voted on at the next meeting of the International Whale Commission, which will take place next month. Biologist Ugo Vercillo, one of the coordinators of the project, took advantage of his participation in the World Conservation Congress in Honolulu, Hawaii, to lobby representatives of countries opposed to the measure. "We need to turn four votes," Vercillo told the blog during the event. The proposal - available for consultationOn the Commission website - is being hosted by four other countries: Argentina, Uruguay, Gabon and South Africa. Presented by Brazil in 1998, the project was put to a vote for the first time in 2001 and has suffered some defeats ever since. The last time he went to the plenary, he came close to getting the 75% of votes needed to approve the proposal. At the time, 40 member states voted in favor, 18 opposed and 2 abstained - checkhow each nation voted .

If approved, the South Atlantic Whale Sanctuary will protect all whales from passing through the waters of that ocean below the equator. In this case, he will join the other two initiatives of the genre: the Sanctuary of the Indian Ocean, created in 1979, and the Antarctic Ocean, 1994. The initiative aims to encourage research, observation and sustainable use of these marine mammals. The video below, produced by the Ministry of Environment, gives more details about the proposal

According to Ugo Vercillo of the Ministry of the Environment, one of the main species benefited by the creation of the sanctuary would be the humpback whale, which had 95% of its population reduced until the end of the last century. "The frank whale, a coastal species, was also very fished.

And the South Atlantic is also part of the itinerary of other migratory species that are not coastal, such as fin whale and whale-sei, "added Vercillo, a 36-year-old biologist from Brasilia.

It is estimated that almost 3 million whales were exterminated in the 20th century, 71 percent of which in Southern Hemisphere seas. Commercial whaling was banned on paper in 1985, but countries like Japan, Norway and Iceland continue to kill cetaceans Under the pretext of doing scientific research. The number of whales decimated since the establishment of the moratorium is counted in the tens of thousands, according to commission statistics.

In order to obtain the necessary votes for the approval of the sanctuary, Brazil will deposit its files in liaison with Gabon. The hope is that this newly co-opted ally for the sanctuary cause will help win the support of neighbors such as Benin, Cameroon, Guinea- Morocco, who did not support the proposal at the last consultation.

"They are francophone countries, which have a strong relationship with Gabon because of their language and proximity," explained Vercillo. "If we can convince them, that changes the landscape."

The biologist explained that some of these countries vote with Japan because they have trade relations with the Asian nation, which stimulates fishing activity in Africa. In past elections Japan has already been accused of buying votes and resorting to other obscure expedients to gain the support of some delegations.

Brazil has made diplomatic articulations in the search for votes. In Honolulu, Vercillo also sought adhesions. At the end of a press conference, the biologist was approached by an environmentalist from Ghana, who voted against the proposal in 2012. Vercillo consulted a document in his briefcase and informed the environmentalist the name of the representative of the Ministry of Fisheries who speaks in Name of the African country in the commission. "If we win this vote would be great," commented Vercillo after the speaker turned away.

The next meeting of the International Whale Commission begins on 20 October in Portoroz, Slovenia.