From drought to floods in 45 days

From drought to floods in 45 days

By the end of July, an estimated 300 people have been killed by floods, around three million have been forced to flee their homes, over 100,000 animals have been drowned – including 21 rare and endangered one-horned rhinoceros – as a water-parched South Asia has suddenly got too much of it since the start of the monsoon in mid-June.

As the Ganga, Brahmaputra, Indus and their tributaries swelled with rain water large swathes of farmland were inundated in Bangladesh, Bhutan, India, Nepal and Pakistan. Parts of large cities such as Dhaka, Guwahati, Patna, Allahabad, Lahore, Sialkot and Gujranwala went under water, and the same fate threatened New Delhi.

It is not as if it has been an especially vigorous monsoon. In fact, the India Meteorological Department says the rainfall during June and July has been exactly the same as the long-period average. It has even been 13% deficient in east and northeast India.

Relative to its size, Bhutan is perhaps the worst flood-hit country in South Asia right now. King Jigme Khesar Namgyel Wangchuk has joined ministers and officials in the rescue and relief efforts in the southern parts of the country. 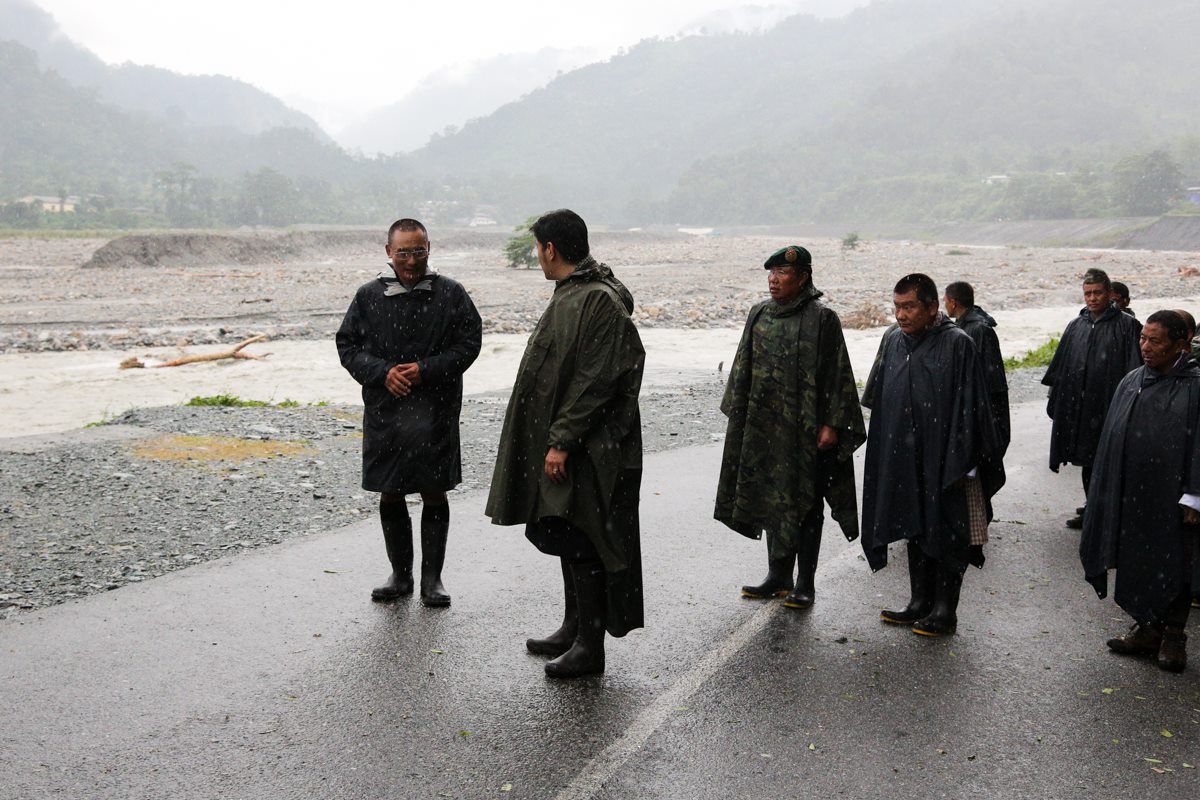 On July 21, the town of Sarpang Bazar was entirely washed away by floodwaters, which also cut off the road to the town of Gelephu. Choden Drukpa, a 40-year-old resident of Sarpang Bazar who earns her living by renting out farmland and shops, said her life had been shattered. She was one of 52 families left homeless when the Sarpang River broke its banks, following continuous heavy rainfall. “We managed to take out some belongings but lost the source of our livelihood, the land,” said Drukpa.

With floodwaters and landslides cutting off the highway from Phuentsholing on the India border, landlocked Bhutan is already experiencing shortages of food and fuel. Power transmission lines have been brought down by landslides and many parts of the country are without electricity. The highway was reopened after five days, and the shortages are expected to ease soon. Prime Minister Tshering Tobgay went public with a declaration that there was enough food in every district warehouse and asked people not to panic.

The department of roads has reported that nine gewogs (districts) were totally cut off when the Buduney Bailey bridge in Samtse district collapsed on July 21. Many other roads, especially to remote districts in the eastern parts of the country, were blocked by landslides.

Floods affected the construction site of the second hydropower project on the Punatsangchu River, with its water diversion tunnel and coffer (temporary) dam under water. Ironically, this was a year when Bhutan had faced a rare drought before the onset of the monsoon, and many farmers had been forced to leave their lands fallow. The Bhutan government is now laying emphasis on developing flood early warning systems along its rivers.

As Bhutan struggles to bring things under control, India’s northeastern state of Assam is struggling. In terms of size of area affected, it is the worst hit. In the Brahmaputra basin 34 people have died and another 1.1 million have been displaced, according to official records. Kaziranga, the world famous rhinoceros sanctuary on the bank of the Brahmaputra, is flooded – some of the rhinos have been drowned, others run over as they tried to cross a busy road to higher ground.

Such widespread flooding during a normal monsoon season is in line with the prediction of scientists – climate change is leading to fewer rainy days, but more intense rainfall on those days. In this situation, the rainwater has less chance of percolating underground and recharging the water table. It rushes along the surface instead. Riverbeds silted due to ill-planned embankments, dams and barrages do not help.

Wild elephants swim through the Kaziranga forest flooded by the Brahmaputra (left); a rhinoceros calf flooded out of the forest seeks refuge in a village home (right) [images by Hariswar Brahma, courtesy News Today]

It is the same story elsewhere in India, where 118 people have been drowned by floodwaters according to official records, mostly in the Ganga basin states of Uttarakhand, Uttar Pradesh, Bihar and West Bengal. The situation is particularly dire in northern Bihar, where the Gandak River has flooded many villages and forced residents to take shelter on railway lines that are built on embankments.

In many cases, people were flooded out when officials were forced to open the gates of dams or barrages to protect the structures. That is why the Yamuna is flowing above the danger mark in India’s capital New Delhi.

In Himachal Pradesh, the Sutlej – which joins the Indus downstream in Pakistan – has inundated villages through multiple flash floods in the mountain areas. The rains have been followed by landslides throughout the Himalayas. Hundreds of tourists are stuck behind them in the resort town Manali.

In the last week of July, almost all the major rivers of Nepal breached danger levels, which experts say is rare. Binod Parajuli, hydrologist at the department of hydrology and meteorology, said, “Normally it doesn’t happen that almost all rivers get above danger level at the same time but on July 26 the water level on most of the rivers that we monitored was above the danger mark. It is pretty unusual to have such heavy rainfall within a short span of 24 hours.” Climate scientists call it the new normal. 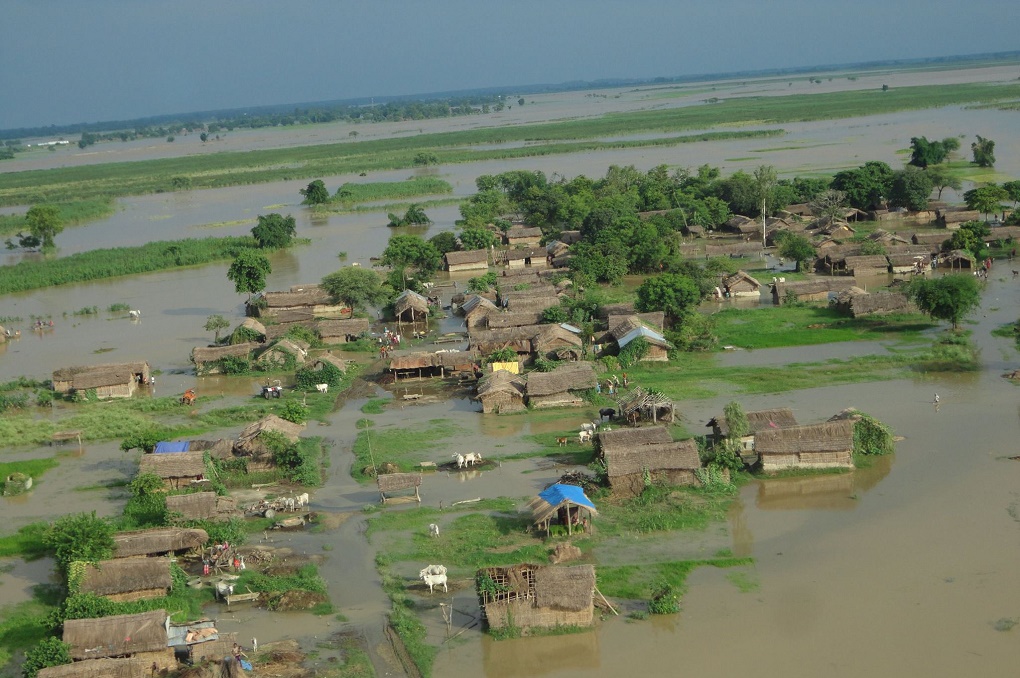 The department has geared up its flood-forecasting and early warning wings this year. Through mobile phones, officials are sending messages to residents at risk as soon as a river crosses the danger mark. “We have already signed MOUs (memorandums of understanding) with major mobile companies for free message delivery and our automatic stations measure water level in rivers which we monitor and send alert to the public as well as the concerned ministries for prompt actions for rescue and relief,” Parajuli added. Real time water level data from eight major rivers across the country is available on the department’s website.

Still, in a country with over 6,000 rivers and rivulets rushing down the steep mountain slopes of the Himalayas, the early warning systems are few and far between. “Flood early warning systems have helped reduce human casualties. If more resources are provided we can reduce it further in coming days,” Parajuli said.

By the end of July, floods had killed 14 persons in Bangladesh and displaced almost 1.5 million people, washing away 9,000 houses and damaging another 12,000, according to official records. Most of the deaths and damage have taken place in northwestern Bangladesh, where the Brahmaputra enters the country from India.

Ripon Karmakar, duty forecasting officer at the Flood Forecasting and Warning Centre (FFWC), does not expect more damage in northwestern Bangladesh, but is more worried about the central and southern parts of the country, as the floodwaters rush to the Bay of Bengal.

Ataur Rahman, a hydrologist who teaches at the Bangladesh University of Engineering and Technology, said that apart from floods in Tibet and India, siltation in the rivers and lack of structural measures were worsening the situation.

So far, the government’s response has been to give 5.50 crore Bangladeshi Taka (USD 702,000) and 13,000 tonnes of rice to the affected districts, apart from 13,000 packets of dry food, Disaster Management and Relief Minister Mofazzal Hossain Chowdhury Maya said in the last weekend of July.

Residents of Pakistan’s capital Islamabad are enjoying the downpours this monsoon without being waterlogged, since the city is built on a slope on the Himalayan foothills. But life in the waterlogged parts of Lahore, Sialkot, Gujranwala and other towns along the Indus and its tributaries has come to a standstill.

Islamabad’s twin city Rawalpindi shows how unnecessary it all is. In 2006, the Pakistan Meteorological Department (PMD) installed an early warning system in Leh Nullah, a natural storm water drain that flows from Islamabad to Rawalpindi. Thanks to the warning, the Rawalpindi city administration now cleans up the city drains on time and gets vigilant about encroachments, so there is no flooding.

The same cannot be said about the northern provinces of Gilgit-Baltistan, Pakistan administered Kashmir and Khyber Pakhtunkhwa (KP), where the rainfall so far has been 10-20% above average. By the first week of July, 46 people had already been killed and 21 more injured in KP alone, according to media reports. There are continuous reports of more damage due to lack of preparedness on the part of the government.

Ghulam Rasool of PMD said, “Given the pattern of intensifying monsoons over the past five years, it is becoming imperative that our cities are built with adequate drainage, and that nullahs (storm water drains) are in proper condition prior to the commencement of the monsoon season. The drainage of rainwater is not rocket science. It requires a little investment, and some government capacity to put in place by-laws and ensure that appropriate space is allocated on roads for the purpose of maintaining storm water drains.”

Predicting heavier rainfall in August, Rasool said, “The showers were not unprecedented, but poor drainage is the reason why our cities are increasingly witnessing urban flooding.” City administrators need to factor in climate change while planning, he added. Storm water drains were traditionally planned keeping extreme records in mind, but the extremes are being breached more and more often. “We have to look at future projections and develop climate resistant infrastructure. That is the need of the time, but our engineers have yet to realise this,” Rasool rued.

The other problem is encroachment on the drains due to migration from villages to cities. Many of the poor immigrants settle down in low lying areas because they have no alternative. 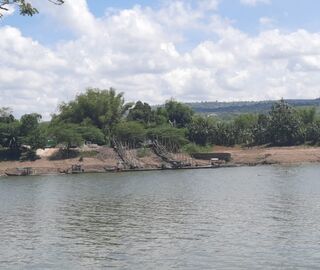