After only six weeks of India’s annual 17-18 week summer monsoon, Uttarakhand is reeling under a series of flash floods that experts blame at least partly on the hydroelectric projects that had been started in the Himalayan state and then abandoned under a Supreme Court directive following the huge flash floods of 2013.

The other big cause is climate change, which has led to fewer rainy days this monsoon, but more intense rainfall on those days. Glaciers are also melting faster as the average temperature in the Himalayas has gone up thrice as much as the global average since 1990.

Faced with this double whammy of climate change impacts and abandoned partially-built dams that have channelled rivers in new directions, residents of many Uttarakhand villages are now stuck behind multiple landslides, with food running out and their homes in danger of being washed away or buried under yet another landslide. 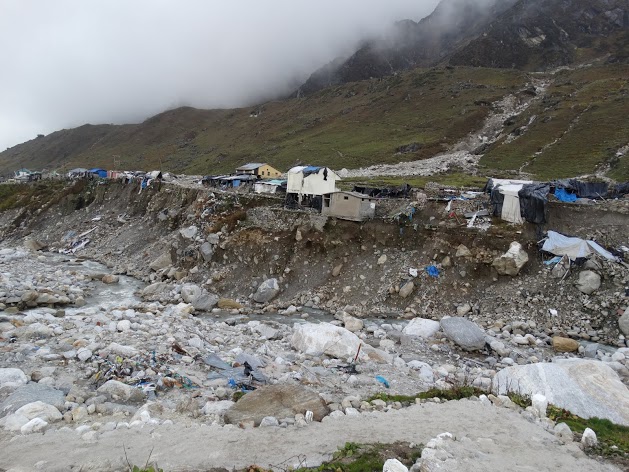 Here is a glimpse of the situation in mid-July in this cradle of the Ganga basin:

In such a situation, different ministries of the Government of India are quarrelling over the resumption of the stalled dams. The ministries of power and of environment, forests and climate change have told the Supreme Court that they want five of the hydroelectric projects resumed, while the ministry of water resources and Ganga rejuvenation has opposed any resumption.

The water resources ministry told the Supreme Court, “The three rivers, namely Alaknanda, Mandakini and Bhagirathi, and Ganga river from Dev Prayag downwards till Ganga Sagar should remain in their current condition without any further disruptions/interruptions or diversion.” Alaknanda, Mandakini and Bhagirathi together make up the Ganga before it descends from the Himalayas to the plains. Ganga Sagar is at the mouth of the Ganga, where it flows into the Bay of Bengal.

Officials in the water resources ministry told thethirdpole.net that the Prime Minister was keen to ensure “sufficient” water flow in the Ganga to dilute at least the worst of the pollution it suffers from further downstream.

But the power ministry is finalising a fresh hydropower policy to give a push to the sector that has been virtually halted due to opposition on the ground from people likely to be displaced by the projects. Environmentalists have also been opposing the projects, and the situation in Uttarakhand gives strength to their arguments.

There were 24 hydropower projects under construction in Uttarakhand when the 2013 floods hit the state, out of the 70 that have been planned for many years. Together, these 70 projects are supposed to generate 9,000 MW, but the water resources ministry has now pointed out to the Supreme Court that this potential has been bandied about without any consideration given to the carrying capacity of the rivers, the minimum water flow required to keep the rivers alive (the so-called environmental flow or e-flow) or the needs of local residents. The ministry now wants a cumulative impact study, taking all the proposed projects into account.

Opposing this and pointing out that rejuvenating the Ganga was one of its mandates, the water resources ministry has told the Supreme Court, “If the origin of the Ganga is compromised, then the rejuvenation of the river will be impossible.”

The environment ministry had told the Supreme Court something similar in 2014 but has now changed tack. There are media reports that the change came after a meeting convened by the Prime Minister’s Office.

While the Supreme Court has to deal with the conflicting stances of various arms of the government, the water resources ministry is going ahead with a bill meant to help clean the Ganga. Minister Uma Bharti has said she has obtained support for the bill from the states through which the Ganga flows: Uttarakhand, Uttar Pradesh, Bihar, Jharkhand and West Bengal. This is essential because various aspects of water resources are central subjects, state subjects and concurrent subjects under the Indian Constitution.

The ministry needs to show results under the Prime Minister’s flagshipNational Mission for Clean Ganga, better known as Namami Gange – which is meant to clean the river, improve water flow and enable navigation by bigger vessels. The mission has an outlay of INR 20,000 crore (USD 2.98 billion) over five years, starting May 2015.

Bharti has been launching schemes in haste. She recently announced the simultaneous launch of 231 projects along the Ganga and its tributaries for modernisation and redevelopment of ghats (steps leading to and from the river) and crematoriums; development of sewage infrastructure and treatment; tree plantation; pilot and interceptor drains; trash skimmers; and conservation of biodiversity.

There are many more schemes, including:

While this list may be impressive, its impacts remain to be seen, while the problem is of a different magnitude altogether.