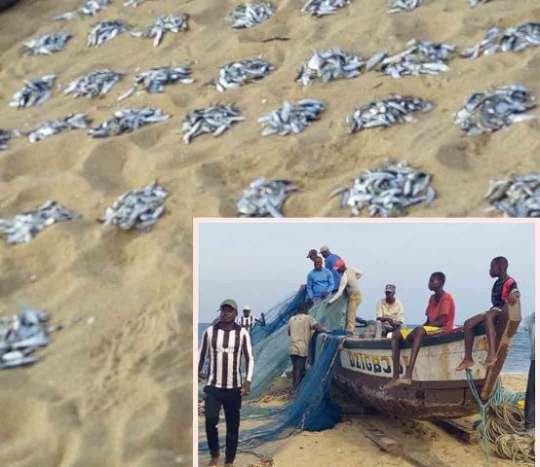 Fuveme (VR), June 09, GNA - Fishermen in the Volta Region, have expressed backing for the proposed “August closed season for fishing” and are asking that the government should go to every length to make this work.

They said the initiative was timely but feared it might not work if the policy was not rigidly enforced across the country.

The ‘closed season’ is to reduce the over exploitation of fish stocks in Ghana's marine waters, and forms part of strategies outlined in the Fisheries Management Plan of Ghana to sustainably manage the nation’s marine fisheries resources.

The Ministry and the Fisheries Commission, this year, implemented a two-month closed season for January and February.

Mr Pillow Defor, Chief Fisherman for Fuveme, Atiteti and Agorkedzi, all in the Keta Municipality in an interview with the Ghana News Agency (GNA) said light fishing and activities of trawlers were also major concerns and underlined the need for these to be tackled as well.

Togbe Viatsideka Katsekpor, a Senior Fisherman, said sometimes, they could go a month without any catch and urged government to use the August closed season to change the narrative.

The GNA during the interaction, to mark World Oceans Day, courtesy Journalists for Responsible Fisheries and Environment (JRFE) with support from the Earth Journalism Network (EJN), gathered that due to low catch, fishermen in the area had resorted to harvesting trees in the mangrove for firewood, which they sell.

“We have been fighting for survival but we get nothing, so we cut these trees for firewood.

We know it is not right because this is where the fishes breed but we have no choice,” a fishermen who sought anonymity said.

At Blekusu, in the Ketu South Municipality, Mr. Martin Nani Mensah, Regent of the community, also expressed discomfort with light fishing and the use of poisonous chemicals, which he said, were affecting the sector.

He added that a month’s break out of 12 months was good - “we will rest and rear animals”.

Kodzo Amara Kwashie, also at Blekusu, who had just come back from fishing, said “We are suffering. From 0400 hours to 1700 hours, we only got a small bowl of fishes to share among 45 members of our company. Government must do something.”

Meanwhile, checks indicate that the Keta and Ketu municipalities have been engaging fishermen in the two areas on the closed season policy and ways of stopping illegal, unreported and unregulated fishing, to revive the industry.