GHANA: Fish poisoning in Ghana, survival of the lawless

GHANA: Fish poisoning in Ghana, survival of the lawless

Nana Kweku Ansah, a fisherman at Gomoa Mankoadze paints a picture of how buoyant the sector was and the present situation. 'In those days, from the 1980s, one fishing voyage could be enough for the week. Our nets got torn as a result of over catch. When we returned from sea, we allowed people to take what they wanted. But this is not so now. From the 1990s, no fisherman can boast of more than enough. Go to the sea, the Chinese have mounted their vessels there, trapping all kinds of fish and engaging in transshipment. But look at us! We have gone to the banks to borrow to start this business. If this becomes your fate, what would you do?' He lamented.

These illegal activities of fishermen in the sea have posed a great threat to the maintenance of the ocean environment and food chain. In order to improve their catch, fishermen use chemicals such as DDT, dynamite, carbide and other substances which kill the fishes and cause them to float on the sea. The use of these chemicals and explosives for fishing has been banned in Ghana but their usage is persistent. Olu is a fisherman at Funko, in the Western Region  of Ghana. He reveals that;

'Government has asked us not to blast dynamite for fishing but these big fishing vessels have invaded our territories by trapping untargeted fish with their unconventional methods. In addition, they sweep through our cast nets and destroy them. If you are not lucky, they destroy your canoe too. Our government has allowed these vessels to operate with impunity. I have a wife and children, if my investment are destroyed by these vessels, what do I do? For me, using these chemicals is the only means to take care of my family'. 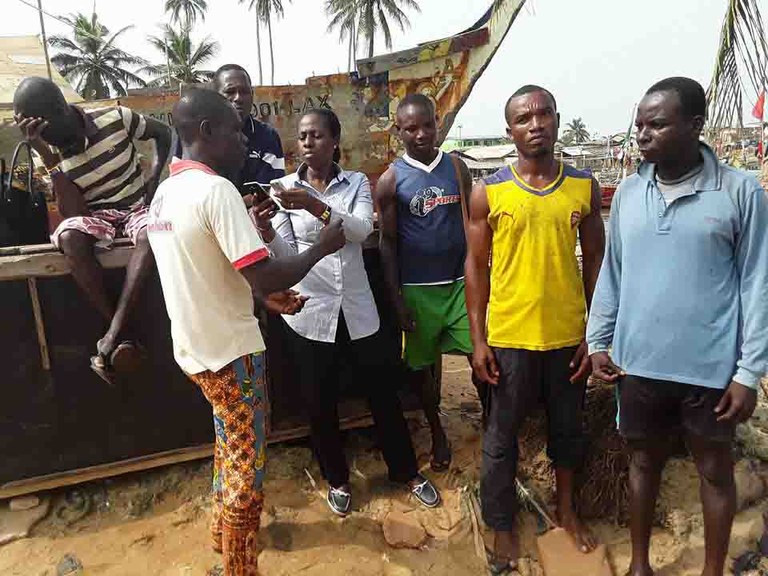 Mary Ama Bawa interviewing some of the fishermen

Olu and his colleagues obtain these chemicals from the quarries but their dealers will not speak to anyone under any condition. According to him, those who sell carbide and DDT live in the communities but fishermen who want these chemicals in large quantities will have to go to the city centres at designated places known by them alone. However, because these chemicals are illegal substances in the fishing industry, the dealers are extra cautious in dealing with these fishermen, the fishermen are  also tight lipped in disclosing the identity of their dealers.

One of the major communities that use to record high catch is Axim. Located in the Western region of Ghana, Axim was famous for glut fish especially during the bumper season. Cold store operatives used to travel from all over the country including the capital to do business there.  Today, the story is different. A visit to the place showed fisherfolks idling, with some asleep at midday while others take to playing a game of ludo. Their faces show nothing but gloom and uncertainty. Fisherman Ekow Mensah tells says their source of livelihood has been hit hard by uncontrolled fishing by industrial vessels owned by foreigners. He asserts that  fish stock has dwindled as a result of government unwillingness to enforce the law limiting these bigger vessels to their allocated areas in the sea. ‘We stubbornly use DDT and carbide because of the Chinese vessels on the sea. We can't stand the competition with just our nets. We won't catch anything if we don't use these chemicals. These vessels catch all manner of fish that they are not to catch. They sell it to local boats and they bring them down to sell to our women. They are destroying our sea. They have structured their nets in such a way that they trap herrings and other pelagic, so when we go, we catch nothing.' 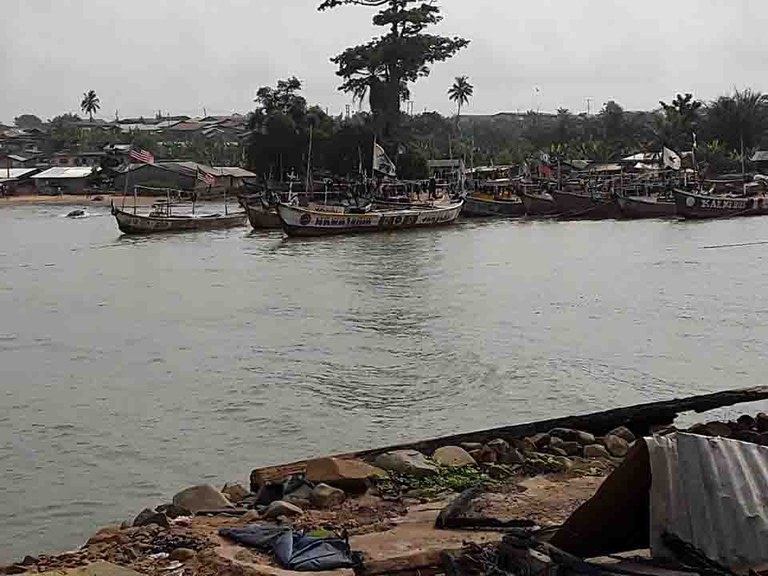 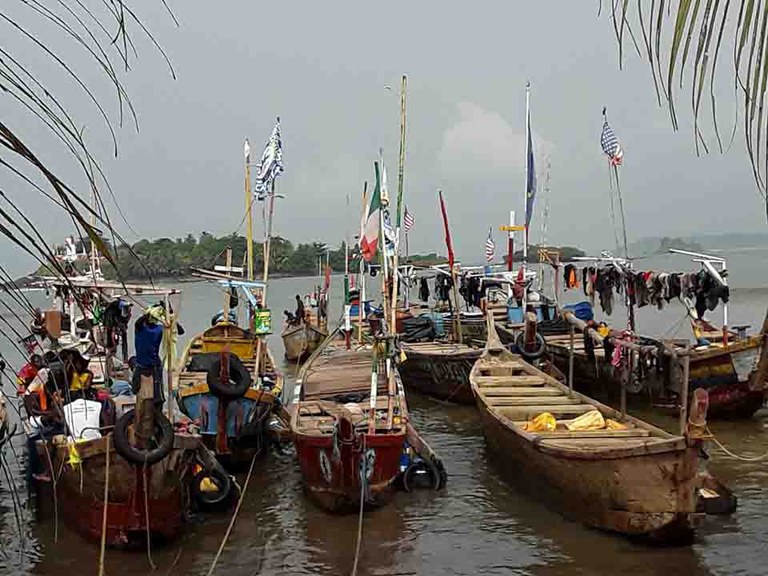 The shores of Axim

The fishermen say they employ these illegal methods of fishing in order to stand the competition of the large fishing vessels operated by other nationals in Ghana's waters. Having taken the fishing space with bigger and better fishing equipment, the expedition by these industrial vessels trap all species of fish including small pelagics which are either sold to some local fishermen in the sea or thrown back into the waters.

Having taken the fishing space with bigger and better fishing equipment, the expedition by these industrial vessels trap all species of fish including small pelagics which are either sold to some local fishermen in the sea or thrown back into the waters. Kobina Abrokwa,  who has been using these chemicals for the past 30 years is now an expert in the preparation of the chemicals and is ready to teach others;   'The kind of carbide we use is just like a stone. So we crush and package it in a polythene bag and tie it. When we are about casting our net into the sea, we tie the polythene around the lead and create small holes around the polythene. And then we cast. When water enters the polythene, it starts generating heat, causing water to bubble out of the bag. The foul smell that emanate from the bubbling polythene makes it difficult for the fish to breathe. So they float on the sea unconscious, and we are able to catch them. DDT is a liquid substance. We put it in polythene bag and create holes and use the same process of the carbide to catch the fish. We prepare this same fish and eat on the sea, nothing happens to us, all the crew members. We know that these are poisonous substances that can kill. But the way we use cannot harm anyone because of the dilution process. We will not deny the fact, we use DDT and carbide', he emphasised. 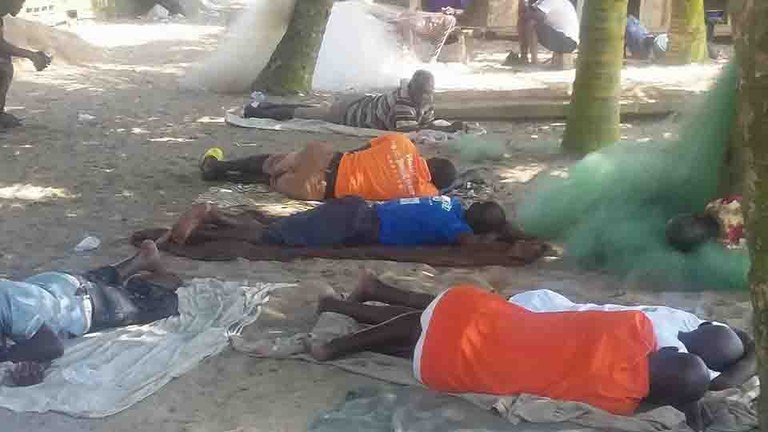 To ascertain whether the residue of these chemicals, DDT,  carbide, dynamite,  remain in the fish after it has been used to trap the fish to the shore, the research team together with a Fish Scientist at the University of Cape Coast, collected samples from Elmina for laboratory investigations. Shiela Fynn-Korsah who is with  the Department of Fisheries  and Aquatic Sciences explains that 'Elmina was selected as the study site because it is the largest landing sites in the Central region which has been reported to be leading in all forms of illegal fishing methods. The Landing site is characterized by two fishing fleets (artisanal and semi industrial) which commonly practice chemical and explosive fishing. Six species, namely Sardine, Chub mackerel, the Skipjack tuna, Red pandora, Threadfin fish, and barracuda were selected for investigation. These species were selected as a representation of the pelagic (the first three )and demersal (last three) assemblages. These species are commercially important species that are commonly eaten by Ghanaians. Sardines and Tunas serve as indicators for small big pelagic fishery in Ghana respectively. The red pandora, threadfins and barracuda have also been reported to contribute significantly to the demersal fishery of the country. Red pandora for example is one of the top four demersal species in terms of abundance and economic purposes. Hence the species serve as a good representation for the Ghanaian fish stock.

Purposive sampling method was deployed to select specimens for laboratory investigation. Specimens which exhibited signs of illegally caught fish were bought from fishermen for study.  Five specimens of each species were selected. Sample size was 30'.

These samples were subjected to scientific analysis at the University of Cape Coast Chemistry laboratory. The Analyst, Dr Joseph Adjei justifies the procedure used in determining the presence of any of the chemicals in the fish.  'The fish samples were subjected to the necessary extraction protocols and we used the EPA method, 83-30 to extract for explosives. We used the same method for the DDT, where we employed Solid Phase Extraction (SPE) method. After the extraction, we brought our analyte to the lab for further analysis. We used the GCMS to do the analysis at the lab. This is both identification and separation method where we search for the compound. This system has an inbuilt library where we search for the actual compound. My first process was to scan through the sample given to see whether the compounds were there. I then did the selected iron monitoring which is confirming the exact component of the analyte that I’m looking for. The peaks show that we have explosives in the selected fish samples. This method is more reliable’, Dr Adjei revealed.

The use of these chemicals for fishing is widespread in many fishing communities and to a good number of the local people, it is a practise they have become accustomed to over the years.  Auntie Brefo sells smoked fish at the Kotokuraba market in Cape Coast.  She buys her fish from Elmina, Akitakye, Moree and Ekumpoano and other fishing communities in the Central region of Ghana. She's aware her clients use these chemicals, but to her, there is no evidence of danger. 'This is the only business I have been doing all my life. Since my father's time, the fishermen have been using these chemicals until government directed that it should be stopped. I buy fish from different landing sites. Some of the fishermen still use them, but I can't tell which fishermen use them. When I bring the fish home, I serve my family with it and sell some. Nothing happens to us.'

The consumption of these toxic chemicals in fish caught from the sea could be deleterious to human health. Dr Frank Ghartey, a toxicologist at the University's School of Medical Sciences says these poisonous substances are extremely harmful when consumed or inhaled.

'Carbide is a very corrosive substance when water makes contact with it. When it comes into contact with water, it produces a gas which is used by the welders to generate the heat that is used for welding. Apart from the acetylene gas that comes out of carbide, there is a small contaminant called the arsenic and phosphorous. When arsenic accumulate in the human body, it is toxic, and so using carbide for fishing has a lot of things that we should be worried about. When DDT also get into the body, it can remain in the fat tissues for a very long time and it has a way of bio accumulating in the environment, especially marine and aquatic life and it is toxic to them. This means that it’s a threat to humans as well. It can make men infertile and for women, there is some suggestion that the DDT behaves like the estrogen that women have, and so there is the risk of increasing breast cancer if you are in an environment that you are exposed to relatively higher level of DDT for a long time. So, these quantities in the fish, if we keep eating such large quantities for a long time and it builds up, that’s where the danger is.'

The government of Ghana has to treat this development as a national emergency.

Relevant sectors such as the fisheries ministry, the law enforcement agencies, the local assemblies and fishermen associations have their roles to play to reverse the current trend to avoid a socioeconomic disaster and a public health catastrophe.