A total of 400 Gigawatt Hours (GWh), equivalent to a third of the annual power generation of Bui Power Authority, Ghana’s third hydro-dam, has been saved through the implementation of the Energy Efficient Refrigerating Appliance Project (EER). Mr Kofi Agyarko, the Director of Renewable Energy, Energy Efficiency and Climate Change, who disclosed to the Ghana News Agency at a side event of the ongoing COP26 in Glasgow, said the project had reduced the yearly average energy consumption of refrigerators from 1200 GWh to 385GWh.

He mentioned that through robust enforcement of the regulations prohibiting the importation of used refrigerating appliances to Ghana, a total of 50,000 used fridges had been seized, dismantled, and a recovery of 1,500 kilograms of chloro-fluro-carbons (CFC), non-toxic gases used as coolants in fridges, had been made.

CFC, when emitted into the atmosphere, breaks down to release chlorine, which damages the sun-protecting ozone layer. A single chlorine atom is thought to destroy over 100,000 ozone molecules. 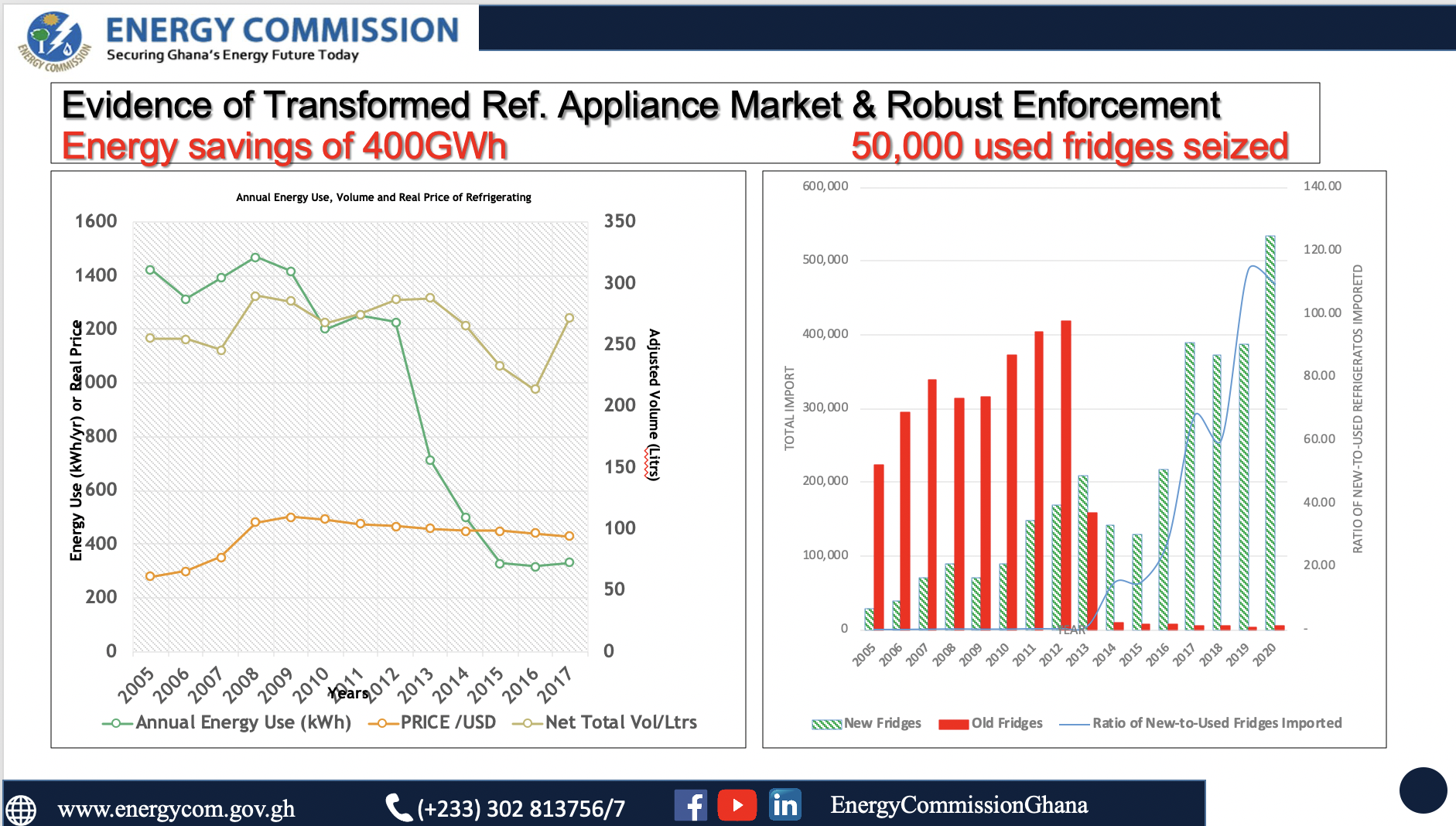 Mr Agyarko noted that the project, which was in line with climate mitigation measures, had a rebate scheme that had retrieved from homes more than 10,000 inefficient fridges in exchange for efficient ones.

He said but for the project, the carbon dioxide emission savings and the CFC recovered would have all ended up in the atmosphere to exacerbate environmental pollution.

Climate mitigation means making the impacts of climate change less severe by preventing or reducing the emission of greenhouse gases (GHG) into the atmosphere. 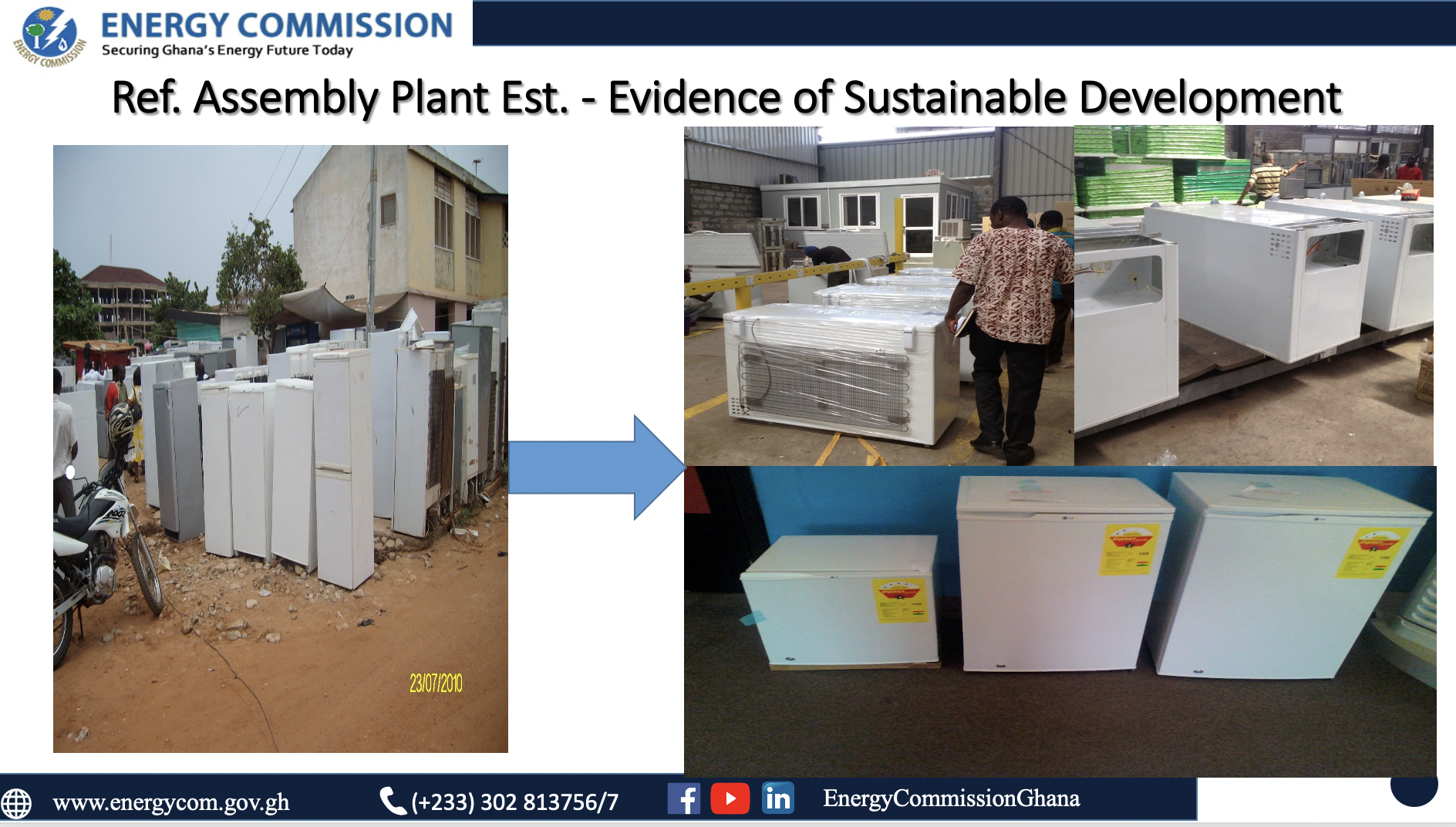 He said the success achieved by the Global Environment Facility and the Government of Ghana funded project was an example of how multilateral funding could help the implementation of adaptation and mitigation measures of climate change.

Mr Agyarko said more initiatives could be rolled out and others would be upscaled if western leaders and business committees would be willing to fund Nationally Determined Contributions (NDCs) to achieve the goal of keeping global temperature below 1.5 degrees Celsius.

He noted, “Technical assistance is good but assistance for implementation is better.”

Mr Agyarko indicated that the more than three-million-dollar EER project, which was implemented by the Energy Commission had succeeded in transforming the entire refrigeration appliance sector in the country.

“Prior to the project, Ghana used to be the dumping hub of imported used and inefficient refrigerating appliances. The imported used refrigerating appliance controlled 80% share of the market. It was littered everywhere and people were patronising them. The national grid suffered, distribution transformers got overloaded with its attendant blackouts and brownouts because of the high energy consumption of this junk.

“Now, we have transitioned to a new efficient appliance market where fridges from abroad come in well labelled. The country has a bubbling assembling plant. This is evidence of sustainable development.”

Globally, countries and the public are being encouraged to implement climate adaptation and mitigation measures to save nature and humanity.

This story was originally published by Ghana News Agency on November 8, 2021. It was produced as part of the 2021 Climate Change Media Partnership, a journalism fellowship organised by Internews’ Earth Journalism Network and the Stanley Centre for Peace and Security.