"Ensure access to affordable, reliable, sustainable, and modern energy for all." This is Sustainable Development Goal 7, which Africa is unlikely to meet because it does not yet have the U.S.$190 billion of investment a year between 2026 and 2030 the continent needs. Two-thirds of that amount will go to clean energy, the International Energy Agency (IEA) said.

But a year after its inception at COP26, the Global Energy Alliance for People and Planet (GEAPP), which operates in 12 countries across Africa, Asia, and Latin America, reports making inroads toward achieving their goals of "improved energy access, reduced emissions, and improved livelihoods."

In Africa, the Alliance partners with Malawi, the Democratic Republic of Congo, Nigeria, Sierra Leone, Ethiopia, South Africa, and Uganda to drive progress against energy poverty and toward decarbonized and inclusive economies.

Malawi President Lazarus Chakwera celebrated the U.S.$27 million solar energy deal secured with GEAPP on the third day of COP27 in Sharm el-Sheikh, saying that the agreement will go a long way in solving the country's energy woes. "The fact that we were able to partner with GEAPP is already showing results and we are thankful to have received support," Chakwera said.

The funds will be used to construct a 20 MW utility-scale grid-integrated battery energy storage system. In October 2022, the energy alliance launched Scaling Renewables in Malawi to Underpin Development program to assist Malawi in achieving universal access by 2030. The program will support Malawi in its goals to increase electricity access from 18% to 100% and improve energy security and reliability. Under the GEAPP program, the Government of Malawi, led by the Ministry of Energy, also launched the Malawi Integrated Energy Planning Tool in collaboration with Sustainable Energy for All (SEforALL).

The GEAPP's impact report Powering People and Planet notes that "growing carbon emissions threaten a climate catastrophe, while a lack of access to reliable, affordable, abundant electricity limits and diminishes the lives of billions of people. These same low-income communities are also the most vulnerable to and least equipped to deal with climate change.

"The Alliance recognizes that to create major change, a new approach is needed. Multiple players (governments, investors, innovators, power companies, philanthropies, and more) must come together to ensure access to electricity for all people, via low-carbon technologies, and with the economic wellbeing of communities taken into account."

According to the International Energy Agency, at least 660 million lack access to electricity, and most of them are in Sub-Saharan Africa, despite the region's considerable natural resources. The report shows that Africa's energy investment needs are immense. The UN says that while a greater share of the global population gained access to electricity in the last decade, the number of people without electricity in Sub-Saharan Africa increased.

Rising prices for fuel and food are disproportionately hurting those in the developing world, where they are least equipped to cope. In addition to the increasing number of people without reliable and affordable energy, those facing chronic hunger are also sadly on the rise again, reversing progress on several of the UN Sustainable Development Goals (SDG).

In its first year of work, the Alliance considers facilitating the Just Energy Transition in South Africa a highlight. The country is grappling with the worst energy crisis in years.

The partnership with South Africa's power utility Eskom, which also draws in the South African Renewable Energy Technology Centre (SARETEC), is for the development of the Komati Training Facility.

The Alliance supports the government's ambitious program that aims to decarbonize the power sector, while also building the foundation for sustainable livelihoods in local communities.

The U.S.$497 million concessional loan is a "significant step" for South Africa's transition towards clean energy. The original Komati Power Station was shut down after serving the South African public for at least 60 years and it is set to become South Africa's first station to be repurposed into a renewable energy site.

GEAPP also initiated The Distributed Renewable Energy – Agriculture Modalities (DREAM) initiative which will oversee the building of the first solar mini-grid-powered large-scale irrigation systems in Africa, providing farmers with reliable, affordable, and sustainable irrigation. The initiative began with the launch of nine renewable energy mini-grids and irrigation systems across Ethiopia.

African powerhouse Nigeria is piloting the Demand Aggregation for Renewable Technology (DART) – a key program that aggregates demand, standardizes equipment and enables bulk procurement of renewable energy components. The project aims to drive down the cost of developing minigrids. In the coming years, DART is expected to expand to Ethiopia, Madagascar, and beyond, bringing utility-scale pricing to mini-grid projects across Africa.

The Alliance is supporting a diverse set of innovative projects in Nigeria, designed to bring clean electricity, economic development, and sustainable livelihoods to underserved communities.

Sierra Leone's chronic electricity shortages and high dependence on foreign-owned, fossil-fuel-powered, and expensive offshore power barges are being addressed by the development of the Betmai hydroelectric power station, and this move is expected to dramatically and cleanly increase the country's power generation capacity. This project includes regulatory capacity building and hopes to encourage further investment in power transmission and distribution systems.

This story was produced as part of the 2022 Climate Change Media Partnership, a journalism fellowship organized by Internews' Earth Journalism Network and the Stanley Center for Peace and Security. It was first published in AllAfrica on 8 November 2022 and has been lightly edited for length and clarity.

Banner image: Over a hundred South African activists joined other climate activists from across the globe with a symbolic anti-coal installation in Johannesburg's Gandhi Square to call on the South African government and the national utility, Eskom, to unplug coal power, and turn to renewable energy instead / Credit: Greenpeace Africa via Flickr. 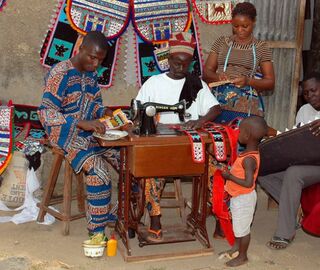 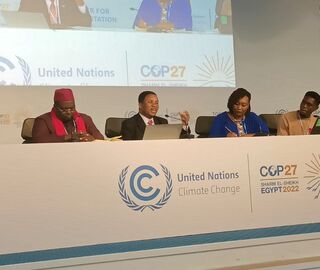