Da Nang (Vietnam), June 24 (IANS) The world was urged on Sunday to take urgent action to reverse deterioration of the global environment at the opening of the 54th Global Environment Facility (GEF) council meeting in this Vietnamese port city.

GEF CEO and Chairperson Naoko Ishii told the opening session of its council that it was meeting at "a critical moment for the future of our planet and its people". 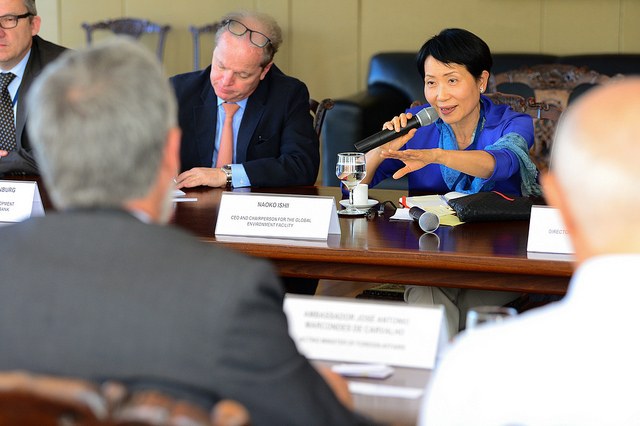 Reflecting on what the GEF has achieved, she said the experiences "will all help the GEF become even more effective and efficient in the coming years".

But, she added: "We know that the global environment continues to deteriorate, and that it is becoming even more urgent for us to take action. So, our ambitions for impact must be even higher. We must aim to do even more."

It was "extremely urgent", Ishii explained, to come together to transform key economic systems, like food and land-use, energy, cities and patterns of production and consumption.

The GEF would continue to offer "innovative programmes" to support countries in doing this.

The GEF Council is meeting two months after governments, in a demonstration of confidence, approved a $4.1 billion replenishment of its new four-year investment cycle, known as GEF-7.

She said this would make the GEF and its partners even stronger and more effective, with "some very ambitious programming directions which aim high in terms of impact, which build on the GEF's uniqueness as a financial mechanism for many conventions, and emphasise its role in some new, emerging priority areas, like marine plastics".

GEF, established on the eve of the 1992 Rio Earth Summit to help tackle the planet's most pressing environmental problems, has provided $17.9 billion in grants and mobilised an additional $93.2 billion in financing for more than 4,500 projects in 170 countries.

India, among the world's most vulnerable countries to climate change, is both a donor and a recipient of GEF, an international partnership of 183 countries.

World Bank's Vice President for Development Finance and a co-chair of the GEF-7 replenishment process Axel van Trotsenburg said, "At a critical time when the global environment is worsening and the consequences are increasingly being felt, the GEF is now poised to deliver even greater results for the environment and value for money."

Climate and Environment Funds in Australia's Department of Foreign Affairs and Trade Director Peter Elder was elected as co-chair of the 54th GEF Council, which ends June 26.

The Council will be followed be the sixth GEF Assembly (June 27-28), which meets every four years, and is expecting 1,200 participants, including heads of state, environment ministers, UN, NGO and business leaders.

Vung Ang and Suralaya: So Far yet so Close in Experience

Glasgow, Scotland
What the Philippines needs to do after UN climate deal