The emergence of golden tigers has highlighted the dangers of habitat loss and the need for corridors that allow tigers to safely traverse between patches of forest.

When Indian wildlife photographer Mayuresh Hendre’s images of a very special tiger went viral on social media last July, he felt compelled to issue a warning. The tiger was in Kaziranga National Park in the state of Assam, in northern India. Instead of having stark black stripes on a bright orange background, this tiger had pale golden fur streaked with faded red-brown stripes, and a face that was mostly white. It was a ‘golden tiger’, an extremely rare form whose genetic makeup explains its appearance.

Kaziranga National Park authorities say there are in fact four of these golden tigers in the park, one of which was first seen in 2014. While Twitter and Facebook users swooned over the one in Hendre’s photographs, he published a video to highlight concerns that the tiger’s atypical coloration was a worrying sign of inbreeding. The emergence of these animals has highlighted the dangers of habitat loss and the need for corridors that tigers can safely travel between patches of forest.

India is home to around 70% of the world’s wild tigers, and Kaziranga is one of their strongholds. It has the highest tiger density of any protected area in the world. But threats to these tigers are mounting. Poaching remains a pressing concern, alongside habitat loss, human encroachment, siltation of water bodies and, on top of all that, recurring floods and erosion.

Flooding is not new to Kaziranga. It has helped to shape the grasslands, savannahs and swamp forests that form ideal habitat for India’s ‘big five’ wildlife species — the great one-horned rhinoceros, Asiatic elephant, royal Bengal tiger, eastern swamp deer and Asiatic buffalo. But the problem is that floods are now massive. They are affecting people and wildlife like never before.

While hundreds of endangered and rare animals get killed or carried away by swirling waters, erosion of riverbanks by the Brahmaputra River and its tributaries has destroyed habitat and brought people face to face with wildlife. Local women Anita Chawra, Marina Medhi and Draupadi Chawra say they have all encountered wild boars, elephants or tigers from Kaziranga in their homes in No. 2 Kohora, a settlement near the Central Range of the national park.

“During floods, a tiger would sneak into your home,” says Anita Chawra. “And then the guards would come in a boat to chase it away.”

In 2012, a study of riverbank erosion by the Brahmaputra, by Jogendra Nath Sarma and Shukla Acharjee of Dibrugarh University, showed that Kaziranga National Park had lost 8,120 hectares between 1912 and 2008. A significant amount of the national park’s core area has been lost, including some anti-poaching camps and thickly forested areas.

More recently, the North Eastern Space Applications Centre, in Shillong, used geospatial technology to analyze changes in land cover in Kaziranga National Park. In a study published in February 2021, it showed that flooding and erosion had led to a “huge landmass loss” along the northern and eastern parts of Kaziranga.

It is not only wildlife that suffers. Data from India’s Ministry for Water Resources show that erosion left 86,536 people landless in Assam from 2014 to 2019. Resettlement is complicated, as many of these people want to remain close to their original homes, rather than being moved to new areas. Thousands of such families have been living on embankments in temporary shelters waiting for the government to rehabilitate them, while the non-availability of land in preferred areas forces others to settle in the fringes of forests or sometimes inside protected areas.

“Since the 1950s we have shifted our homes at least six times,” says Dhakum Doley, a member of the indigenous Mishing tribe. His family is one of several hundred who lost their homes and land to erosion and were forced to live in an embankment in Dhansirimukh, near the Eastern Range of Kaziranga National Park. “Every year, the river has been eroding huge areas,” he says.

Close to where Dhakum Doley lives, sightings of ‘golden tigers’ inside the national park have created much speculation. The first to be photographed, in 2014, was a female that Kaziranga National Park authorities named Kazi 106 F. In a report, they stated that such color aberrations have only rarely been recorded in wild tigers.

“The biological cause of color aberration may be due to excessive inbreeding caused by habitat destruction and loss of connectivity,” said the national park’s director, P Sivakumar, in a press release.

The Kaziranga authorities cited research that compared genetic data from modern tigers with that from tigers shot during the time of British rule in India (1858-1947). The study, published in 2013, showed that 93% of tiger mitochondrial DNA variants from the colonial era were no longer present. It concluded that habitat loss and fragmentation were eroding the genetic diversity of Indian tigers, while subdividing the variety that remains into ever more isolated patches of habitat.

“If genetic investigation proves that the color variation is due to excessive inbreeding, then definitely it is bad news for Kaziranga’s tiger population,” says conservationist Anupam Sarmah. “Inbreeding takes place when a population becomes isolated. More than shrinking of habitat, it is about the [loss of] connectivity among different habitats.”

There is concern that this is forcing tigers to breed with close relatives, with the resulting decline in genetic diversity limiting the ability of the species to adapt to change. Excessive inbreeding can also lead to undesirable genetic variants that leave animals vulnerable to disease. So, while recent estimates of wild tiger populations have shown a positive trend, in reality the tiger is not out of danger.

“Tigers today are confined to political boundaries of a protected area, whereas 100 years ago it was not the case,” says Dr Bhaskar Choudhury, deputy director of the Centre for Wildlife Rehabilitation and Conservation — an animal rescue center near Kaziranga National Park.

“In any habitat, a species would flourish if the stress factors are reduced to a minimum,” he says. “For tigers it is prey, security and space for dispersal of sub-adults. We have reduced these dispersal attempts by converting lands into agriculture, infrastructure and settlements, resulting in close interface with people and ultimately jeopardizing wildlife and people alike.”

The concentration of tiger populations into shrinking patches of habitat does not just threaten their genetic health, according to Bhupen Talukdar, a former official with the Assam Forest Department.

“Population increase, beyond [an area’s] carrying capacity, also degrades the habitat and degraded habitat reduces the population,” he says. “Straying incidents throughout the year, unnatural deaths of juveniles, sub-adults or individuals which are over-mature, and infighting between breeding males and even other age groups due to scarcity of food, are some of the primary signs of habitat shrinkage.”

Such overcrowding is an even bigger problem than inbreeding, says Firoze Ahmed, head of tiger research and conservation at non-governmental organization Aaranyak. He points out that for genetic problems to manifest, small numbers of tigers would need to continue inbreeding over several generations. The real problem today, he says, is that the tiger population is outgrowing the capacity of the habitat to sustain it.

“Life is harsh for tigers in this high-density habitat,” he says. “They are vulnerable to injuries and get killed during infighting, even due to small injuries.”

Sivakumar, the director of Kaziranga National Park, says that restoring natural connectivity and dispersal routes between tiger habitats is now the top priority for conserving breeding populations and reducing competition.

“Ever-increasing human interference has disrupted the ability of tigers to move,” he says. “Habitation, industry and infrastructure development led to the loss of natural corridors and connectivity with adjoining forests of Karbi Anglong and North Cachar hills on the southern side of Kaziranga National Park.”

Sivakumar says it is vital that tigers can travel between Kaziranga and other protected areas such as Orang National Park and Tiger Reserve, Nameri National Park, and the Loakhuwa and Burachapori wildlife sanctuaries.

While the Brahmaputra River can destroy wildlife habitat, it also creates new areas by depositing sand bars, known locally as chars, which aid the migration of tigers. But these chars are also used by landless people, whose settlements are barriers to the tigers.

“These are areas where animals would try to move in,” says Sandeep Bendi, Divisional Forest Officer, Orang National Park and Tiger Reserve. “But if that particular area is not a protected area it is difficult to ensure their safety.”

Orang, with a core area of just 7,930 hectares has a current population of 34 tigers. They are at risk of being disconnected from tigers in other habitat patches, as almost all corridors from Orang’s north, west and east sides have been lost. Bendi and his colleagues have submitted a formal proposal to expand the national park by adding the Brahmaputra riverine area on its southern side. This would connect Orang to the Kaziranga landscape.

“With habitation all around like a hard boundary, and frequent human-wildlife conflicts, the only corridor now left is the Brahmaputra River that forms part of the buffer area,” says Bendi. “If we are able to secure it as a protected area, this could be the only corridor and very, very important for the future of Orang.”

According to the National Tiger Conservation Authority, the tiger population in India more than doubled between 2006 and 2018 to reach an estimated 2,967. But this alone is not enough to ensure the species’ survival, say experts, who worry that a lack of genetic diversity has become a threat looming large for a population that is largely confined to 52 tiger reserves.

As photographer Mayuresh Hendre noted in the video he posted online when his images went viral, the color aberration in Kaziranga’s tigers is a warning of the need to find ways to better connect the fragmented tiger population in the forests of the Brahmaputra valley.

“Seeing a golden tiger is not a sign of joy,” he said. “More tiger corridors are the need of the hour.”

Mubina Akhtar produced this story with a grant from EJN’s Biodiversity Media Initiative. It was first published in English by the Assam Tribune on 3 September 2021, and in Assamese by Asomiya Pratidin on 6 September 2021. It has been lightly edited for length and clarity. The Biodiversity Media Initiative is supported by Arcadia — a charitable fund of Peter Baldwin and Lisbet Rausing.

Banner image: A ‘golden tiger’ in a zoo — these animals are extremely rare in wild populations / Credit: Dave Pape via Wikimedia Commons. 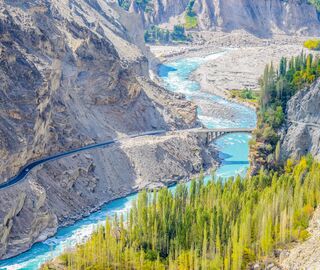 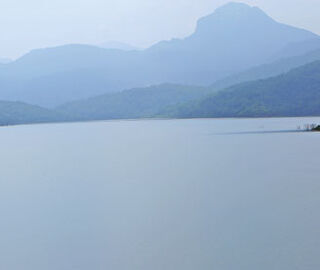 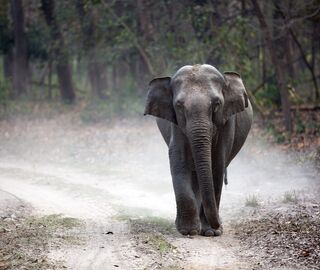