Denis Klimentyev, an eco-entrepreneur in eastern Russia’s Irkutsk region, produces camelina oil, used in cooking, and sells it to supermarkets as part of a co-operative also supplying herbal teas and jams made from wild forest fruits.

Klimentyev wants to set up an independent distribution network for locally produced organic products, encouraged by the training he received two years ago at a school for green startups in economically depressed areas around Lake Baikal, the world’s biggest freshwater body.

"Until February 2014, I thought I was all alone (here)... an idealist and enthusiast willing to produce something no one really needs or knows about," he said.

Many of the green businesses nurtured by the School of Environmental Entrepreneurship have been launched by ex-employees of failing businesses, such as pulp mills or chemical plants, which were once the backbone of small towns in the area.

One of the school’s experts, environmentalist Marina Rikhvanova, is a former director of local green group Baikal Wave, which fought for 25 years to protect the lake. It holds a fifth of global freshwater resources, and is home to more than 1,500 unique species of plants, fish and marine mammals.

One targeted the Baikal Pulp and Paper Mill, which was built in 1966 by the Soviet government, then owned by Russian billionaire Oleg Deripaska from 2002 until 2010 when it was re-acquired by the state. Activists said it had polluted the lake for more than 40 years with chemical substances.

The other protest was against plans to lay the East Siberia-Pacific Ocean pipeline to bring oil from Russia to Asia within half a mile of the lake’s shores.

Both campaigns achieved their aims: the mill was closed down by the government in 2013, and the pipeline route was changed.

But in 2015, under a recent Russian law, Baikal Wave was declared a “foreign agent”, designating it as a rights group funded from abroad. Following state-imposed fines for not having registered as such, it closed down in 2016.

Most of the group's employees and experts have since set up new environmental initiatives in the region.

The school for green entrepreneurs was established in 2012 in Baikalsk, a small town on the lake’s shores, by Elena Tvorogova, a director of the charitable foundation “Revival of Siberia”, with support from En+ Group, a metals, mining and energy company owned by Deripaska.

The Baikal Pulp and Paper Mill shut down a year later, causing the loss of 300 jobs, on top of 1,400 earlier lay-offs.

For the first few years, the school mainly supported strawberry-growing ventures run by former staff at the mill and other local residents, selling the fresh fruit in the region or processing it into jam.

Now the school runs short courses twice a year, mainly in Baikalsk, for around 50 participants each time who live around the lake.

As a result of the nine sessions held so far, 101 business ideas have been worked out by people aged from 14 to 58 - and 20 of those have come to life as eco-enterprises.

The school supports them by running trade fairs and promoting their products in catalogues and on websites, and presents their ideas to potential investors.

The school receives funding from En+ Group and a number of local businesses, while experts from Russia's biggest bank Sberbank help with training.

"We are not only trying to bring up a new generation of social and environmental entrepreneurs in the region - we are also attempting to think about the future of 'mono-towns' in Russia,” said Tvorogova.

Thousands of "mono-towns" still rely on a single factory or enterprise, a legacy of Soviet times. If that business closes, it can have a dramatic negative impact on the local economy and residents’ quality of life.

With labour and social mobility still very low in Russia, former employees end up living off social welfare, while many young people move to cities to look for work.

"We are also trying to give new skills, knowledge and opportunities for young people here, so that they don‘t leave the area for larger cities, and can contribute to the sustainable development of their regions," Tvorogova said. 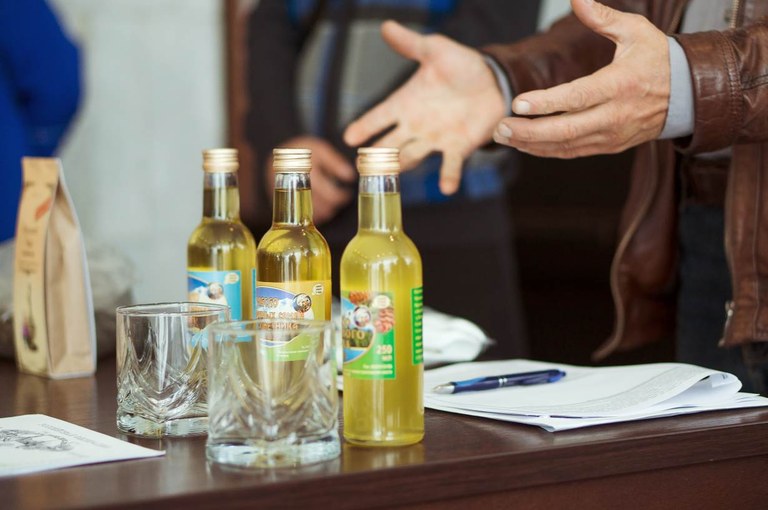 Eco-products are tested at a trade fair in the Baikal region, Russia. PHOTO/Evgeny Rakityansky

"We are a new generation of entrepreneurs - the ones that are not only after quick profits, but also have social and environmental goals, which is truly good, not only for us but for the development of the region," Ilyin explained.

Fellow alumni Olga Lopatkina and Petr Lopatkyn have set up a small chocolate production business using honey from bee-keepers in the Baikal area. "We think our business is also about social impact, so we hope it's useful and necessary in today's Russia," said Lopatkina.

Other projects incubated by the school range from production of plant oils, herbal teas, mushroom products and crafts, to organic gardening and recycling.

The school is now looking at ways to solve a new environmental problem in the area – the invasion of Lake Baikal by green algae (spirogyra).

The problem has been caused by high use of phosphate-based detergents as new hotels and housing blocks have sprung up around the lake in the past few years to accommodate a rise in tourists, who can number up to 1 million in the summer.

Most private homes and guest houses struggle to treat their waste water as municipal plants are overloaded and domestic equipment often malfunctions for the same reason, meaning that sewage is discharged directly into the rivers and canals that feed Lake Baikal.

"We are looking at opportunities to set up or support local businesses which would encourage residents to harvest the algae from the lake shores, and produce something useful from  it - bio-compost, paper and packaging, or organic fertilisers," said Rikhvanova.