More than a year after Super Typhoon Haiyan nearly killed her, Lyn (not her real name), 14, was trying to start a new life in the devastation left behind in the central Philippines.

It was seemingly a new chapter since the typhoon that killed more than 6,000 people and displaced approximately 4.1 million, including women and children like her. It brought fear and despair into their lives. Lyn had survived. But her harrowing experience and that of children her age did not end there.

Lyn is a grade 8 of Osmena National High School in Marabut Samar. She is the second child of the family. Her mother is a housewife while her father plants root crops in the mountains as a means of livelihood.

In March 2014, we were still picking up the pieces of our lives after typhoon Yolanda (Haiyan). After our elementary school graduation, we met the members of a certain organization called “Babalam Kevalam” in Brgy Osmenia, Marabut Western Samar.

The group conducted a relief operation in our Brgy and stayed in the elementary school temporarily for their operations. One of the members, who identified herself as a nun, approached us while we were planting in our community garden.

She asked the five of us who, at that time were 12-13 years old, if we wanted to study in Manila and offered us scholarships. Because of our great desire to attain a formal education, all of us agreed and immediately “Babalam Kevalam” went to our parents and asked their permission to bring us to Manila.

Out of my mother’s desire for me to have a better education and the difficult situation we were facing, Babalam Kevalam got her permission. At first, my mother asked the members of the group to acquire a certification from DSWD and in the Brgy because they would be bringing five minors.

Right there and then they vehemently refused and told us that it was no longer necessary to get a certificate from them. Instead, they made our parents sign an authorization paper stating their consent and authority for transporting us.

They promised that they would send us to high school and even to college, and once we acquired our degree they would send us abroad to work with in foreign countries. Because of their enticing words, our parents thought that by signing the papers, we would have a better future.

It was when the recruiters prohibited us not to bring cellphones or any gadgets to Manila that we felt that there was something wrong. Because of our growing doubt, one of my friends, Nina (not her real name), secretly brought a cellphone and put it inside her bag.

When we were already on the New Bus Terminal in Tacloban City, a male passenger asked us where we were be going. I told him that we were going to Manila with the nuns in orange that were seated in the back of the bus. The man started to ask more questions and wondered why those nuns were wearing orange clothing.

He left the bus for a while and suddenly he appeared with policemen. The authorities asked the nuns if they have acquired certificates from DSWD and Brgy since they were transporting minors. One of the nuns just presented her voter’s identification card. We were immediately brought to the police station for inquiries and eventually we were brought to the women’s shelters in Tacloban City.

We stayed in the shelter for one and half months before we were brought to our own families in Marabut Samar. After the incident, I saw the tarpaulin stating about Human Trafficking and it was the first time that I learned about the crime.

Because of my experience and the things that I’ve learned I warned my classmates not to talk strangers especially when they promise they will send them to school or take them to other places.

Today, Lyn is in eighth grade. Like other typhoon Yolanda survivors who suffered the effects brought by the storm, she remains one of the most vulnerable because of a lack of response and intervention by the government.

Recently, the Chairman of Regional Task Force on Human Trafficking City Prosecutor Ruperto Golong reported that 6 children were able to escape from their employer and were rescued in Tacloban City New Bus Terminal by the Department of Social Welfare and Development.

Some of them had been in Quinapondan working as sales assistants for three to five months. The Regional Task Force was formed three years ago for the purpose of prosecuting such case in court in coordination with the Department of Social Welfare and Development Office Regional Office 8.

The task force was able to record 39 cases of human trafficking before typhoon Haiyan struck the region. The figure includes the prosecution and conviction of an American National who was already deported and was able to serve his sentence in the country of his origin.

However, after Haiyan the Task Force was able to record 8 cases of Human Trafficking which were now filed in court. 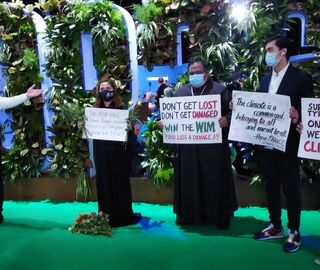 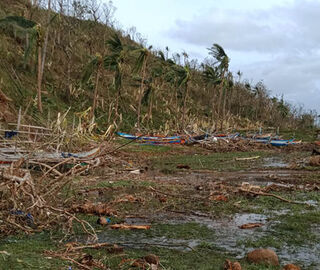