A VIEW OF U.N. TALKS FROM THE PACIFIC ISLAND FEDERATION

At the conference, residents of these islands have told of changing conditions, such as waves crashing high on islands, even reaching roadways -- a sight never seen before. They told of typhoons striking with more frequency and intensity. On the Cook Islands, a meteorologist with the islands said five typhoons struck in six weeks in 2005, destroying many homes, businesses and hotels, and killing 10 villagers due to a sea surge. Droughts strike their islands regularly now, the meteorologist noted, drying creeks that normally run year round to a trickle during the summer, and compelling residents to set up water storage systems for the first time.

Stephen conveyed the anxiety described by these residents, and the hopes for the U.N. climate negotiations. I won't describe the acronyms he uses, but they do represent critical programs that could steer the fate of these island nations.

"The Pacific has a rich cultural and linguistic tradition. Hundreds of distinct languages are spoken in homes throughout our fourteen countries," Stephen said. "No more than 10,000 people speak my native language of Nauruan, and it, like so many others, may soon disappear.

"However, none of our words are quite so exotic as the ones spoken by the climate change negotiator," he continued. "The people who inhabit these walls communicate in acronyms: QELROS, LULUCF, and NAMAs -- letters that carry the power to determine which of our nations may thrive and which may vanish beneath the waves."

Environmental groups have sent an army of representatives to the U.N. climate summit here. But fossil fuel industry officials are here as well, of course, helping to shepherd their industries through rapidly changing times.

The World Coal Association, in a thorough blog it keeps, described its encouragement that carbon capture and storage (or "CCS" in its blog) is moving along in negotiations as a way to get official credit for reducing emissions. With carbon capture and storage, carbon dioxide will be captured at the source of large industrial sites, and then -- in an ideal scenario -- stored. Right now carbon dioxide can be captured, but a good storage system hasn't yet been developed, although it's a research priority worldwide.

The association's blog gives a good sense of how U.N. negotiations over a global deal for reducing the threat of climate change are going, and notes that financing to help developing countries adapt to climate change is one of the most promising developments. www.worldcoal.org/blog

As an aside, a U.N. negotiations expert noted that this financing -- $30 billion between 2010 and 2012 and up to $100 billion a year by 2020 -- isn't regarded as charity to developing countries, but compensation for the harm from greenhouse gas emissions released by developed countries.

And apropos to my first "Hotsheet" post, here's the take on the unusual conference logistics in Cancun from Benjamin Sporton, policy director the coal association, in his Dec. 1 blog post. While most have now grudgingly adapted to the dispersed arrangement (and the traffic jams have largely ended), he points out a downside I hadn't considered:

"Conference logistics have been a popular topic of discussion among participants not staying at the conference venue. While negotiations are taking place at the Moon Palace, which is normally some 20-45 minutes drive away from most hotels -- the heavy morning traffic and numerous police check points meant that many delegates spent several hours stuck in a traffic jam on the first day of the conference. In addition, delegates have to travel past the Moon Palace to the second venue, the Cancun Messe (or the Cancun "mess", as some have named it!) to go through a security check, board shuttle buses and drive a further 20 minutes back to the Moon Palace," Sporton wrote.

"A lot of nongovernment participants have also criticized the separation of the venues for side-events (at the Cancun Messe) and negotiations (at the Moon Palace). Historically government representatives have been able to drop in to side events (most of which are run by NGOs) in between negotiation meetings. This has given government delegates the opportunity to participate in detailed discussions on issues of interest to many NGOs, including business and industry representatives. However, with these side-event discussions now being held a good 20 minute bus ride away, there has been noticeably reduced attendance by government delegates at side-events this year, which is pretty disappointing," he added.

The steep emissions drop could come at a cost of less than one percent GDP by 2030, the committee stated, if the U.K. government puts in place policies to reduce emissions at power plants, and employs new technology like carbon capture at coal-fired plants. Expanding the use of electric transportation and heating, along with improved energy efficiency in buildings, industrial plants and on farms would also contribute substantially to emission reductions, the committee said.

Carbon dioxide is one of several greenhouse gases that serve to trap solar heat on Earth.

According to the 2007 report from the U.N.'s Intergovernmental Panel on Climate Change, global surface temperature increased 1.33 F during the 20th century, with most of that caused by increasing concentrations of greenhouse gases released by human activity.

The 15,000 people who've gathered here at the climate summit are focused on avoiding the scenario of a fivefold or more temperature increase this century if greenhouse gas emissions continue growing at their current rate. Studies report that temperature increases of that magnitude would lead to rising sea levels and far more extreme weather, among other effects, causing significant loss of life and economic disruption.

"The case for action on climate change is as strong as ever. Climate science remains robust and suggests that there are very significant risks if we do not cut emissions," stated Lord Adair Turner, chair of the UK's Committee on Climate Change, in a prepared statement. "And countries acting now will gain economic benefits in an increasingly carbon constrained world."

A report released Friday here asserted that these events -- which the report linked to changing climates -- are already putting at risk 350,000 lives a year worldwide.

Prepared by a group of nations vulnerable to climate changes -- headed by the island state of the Maldivess -- and DARA, a Madrid-based humanitarian research group, the Climate Vulnerability Monitor 2010 stated that climate change effects could contribute to the deaths of 5 million people by 2020 and by 2030 cause as many as 1 million deaths annually if global warming is not slowed.

The information-packed report is found at http://bit.ly/edov3X, and provides clear explanations of why climate scientists are alarmed about the consequences of humanity keeping up its current pace of greenhouse gas emissions.

For example, it provides a simple overview on the science behind the concerns over human-released greenhouse gases:

"Greenhouse gases are measured in parts per million (ppm). They amount to about 390 ppm today (up from about 280 ppm in 1750) and are growing at roughly 2 ppm per year."

Climate experts, however, "recommend limiting greenhouse gas emissions to 400 ppm in order to avoid 3.6 F to 4.3 F of warming."

That doesn't sound like much, but the report -- along with many others on climate change -- describes potential serious consequences from that level of increase.

It uses a new methodology, and the authors acknowledged that "some of the forecasts and conclusions will draw criticism for either overplaying or underplaying the seriousness of the problem. This we welcomed and encourage."

Its findings are backed by United Nations and World Health Organizations reports, research from U.S. agencies such as the Department of Agriculture, and peer-reviewed studies.

Any newcomer to these U.N. climate talks quickly picks up that mastering the dozens of acronyms tossed about is essential for following any conversation. REDD (Reducing Emissions from Deforestation and Forest Degradation), MRV (measuring, reporting and verification) and FSF (fast-start finance) are just a few essential ones. And they'll be explained here in coming days.

But I have a favorite: BINGO. It stands for Big International NGO, or nongovernmental organization. Greenpeace, Sierra Club and the World Wildlife Fund are a few of the BINGOs here, and there's even a very large room called "BINGO Hall." But they don't play cards there: It's a huge room filled with chairs and a table with microphones on a stage, and it's meant for earnest discussions.

These BINGOs, a veteran reporter told me, strongly influence the direction of the negotiation between the delegates from 193 nations gathered here. These delegates are working to arrive at some level of global agreement on reduction in greenhouse gas emissions to keep temperatures around the world from rising to dangerous levels. Given the largely failed U.N. climate talks last year in Copenhagen, there's talk of scaling back ambitions to "incremental" steps.

Greetings from Cancun, where I'm covering the two-week United Nation's climate talks. More than 15,000 attendees have been drawn to the vast affair, and negotiators from 193 countries. And all eyes are on the negotiators, hoping this year they can arrive at a "global deal" to start reducing greenhouse gas emissions, even if only in incremental steps. But there's wariness after Copenhagen -- the scene of last year's disappointing results, which only yielded a vague, voluntary agreement -- and every day people anxiously take the temperature of negotiations.

The Mexican government spared little in securing the conference. A Mexican military helicopter just flew low over the white sand beach outside the resort hotel where I'm staying. Mexican warships protect the turquoise blue coastal waters of this Caribbean city, and helmeted Mexican soldiers and police armed with assault rifles shield every possible entrance to the convention, some with mounted guns.

In an another step that keeps trouble at bay, the huge gathering of 15,000 delegates, nongovernmental organizations and journalists is also dispersed between two conference centers miles apart, meaning a 20-minute bus ride between the two. A half mile before each, armed guards stop any nonauthorized vehicles. There are grumbles about the long rides and bus waits. But white-capped attendants are everywhere, making sure you're on the right bus, and we'll all probably get the routine down soon enough. 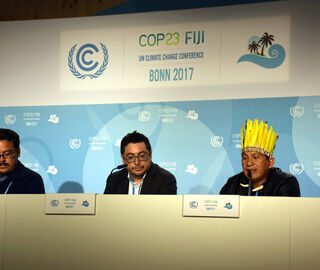 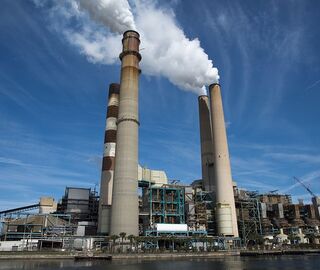 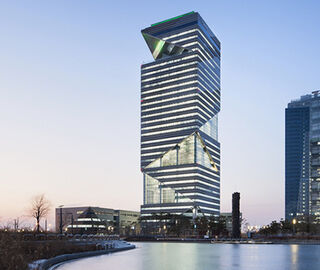