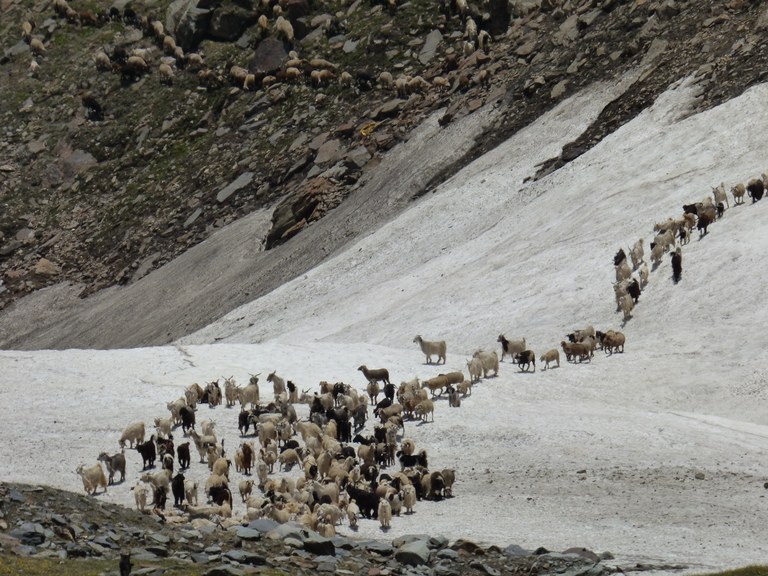 Tarachand Negi shook his head and moved his lips silently. “In the name of humanity, please consider my request,” he seemed to be saying. He had just heard some disturbing news from an acquaintance passing by. The ice bridge he normally used to cross the rushing stream to reach his pasture had melted. He and his group could wade through the strong icy current but his sheep and goats would not make it. If he couldn’t cross, the ten-day trek over the 4,900-metre-high Bhabha Pass and the loss of a dozen livestock along the way would have been for nothing.

Negi saw neither the mercurial colours reflected by the setting sun nor the famous Chumurti horses grazing on the bare Spitian hill slope above him. With a bowed head, he strode towards Sagnam village in Pin Valley, Himachal Pradesh. A leather jacket and tweed pants kept him warm against the chilly wind blowing down from snow-capped mountains. His green and grey Kinnauri thepang cap was jammed over his head, exposing his deeply wrinkled face to the sun.

Sagnam villagers held his fate in their hands. Would they give him permission to drive his flock through the village’s fields and the bridge across the River Pin? He was pessimistic but he had nothing to lose. The culprit that put him in this predicament was climate change.

Although the treeless landscape looked brown in pre-monsoon June, livestock thrived on the grasses, herbs, and shrubs at this dry cold altitude. Once the monsoon receded from Kinnaur and autumn approached Spiti, shepherds would lead their flocks back over the mountains. Villagers and shepherds say the tradition was centuries old. In return for pastures, shepherds paid the village a nominal sum of money. 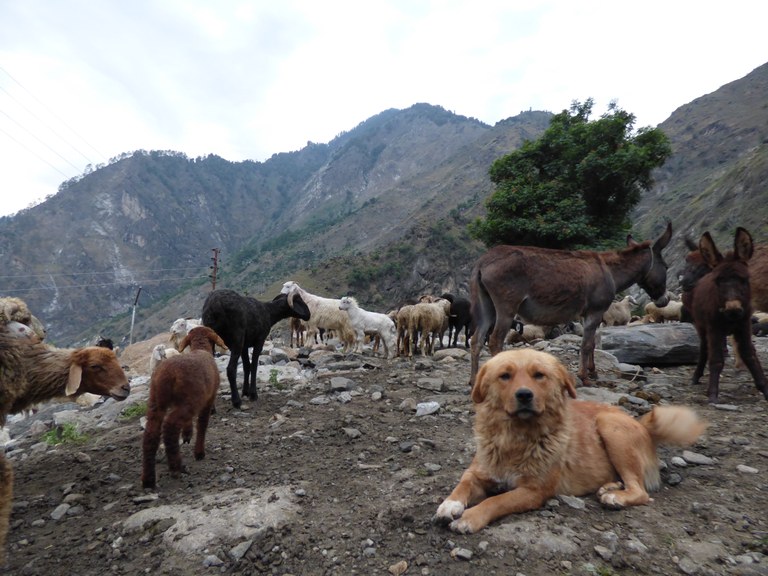 This tradition is now under threat from climate change. Over the past decade, the quality of pastures has degraded. Shepherds blamed insufficient snow and rising temperatures. Excessive and unpredictable rainfall have caused landslides and erosion, restricting access to alpine meadows and ruining them. Every year, more ice bridges disappear. The winter of 2015 was especially dry with little snowfall. One shepherd said instead of two feet, barely two inches of snow fell. These were not typical aberrations in the weather.

The shepherds’ observations were borne out by glaciologists. The district of Lahaul and Spiti has one of the largest concentrations of glaciers, about 2,000 sq.km in extent. Temperatures have risen by 2ºC over the past two decades, and most glaciers are thinning. In the past four decades, 13% of the glaciers have melted.

(Editor’s note: The group that publishes the journal linked here has had a complaint lodged against it by the US Federal Trade Commission for falsely claiming its papers are peer-reviewed and for harassing authors to pay hefty publication fees. However, The Wire has used the link because the author stands by the credibility of the researchers behind the paper and because there have been no other studies conducted on the glaciers of this area.)

It was dark when the village representative, the numberdhar, walked through the alleys, beating a drum and summoning everyone to a meeting. Tarachand, anxious to get a quick approval, knocked on every door to humbly request people to attend. His flock was camped at the edge of the village. He couldn’t stay there, even for a day. He had to set off at first light either for the pasture or to return home. Families were gathered around the warmth of the tandoor as dinner cooked, eagerly waiting for the meal of the day. Would the men tear themselves away to attend the meeting?

One by one, they wandered out of their homes into the cold night. At half past 8, about 15 men gathered in a narrow alley in the middle of the village and Tarachand made his case. “If you don’t allow me passage, I’ll have to return home,” he pleaded.

Back home in Rupi valley, his wife tilled small terraced fields cut into steep slopes. The nearest road head was a few hours walk away. Produce had to be hauled out of the valley on the backs of mules or donkeys. The short growing season ensured agriculture remained at subsistence level. 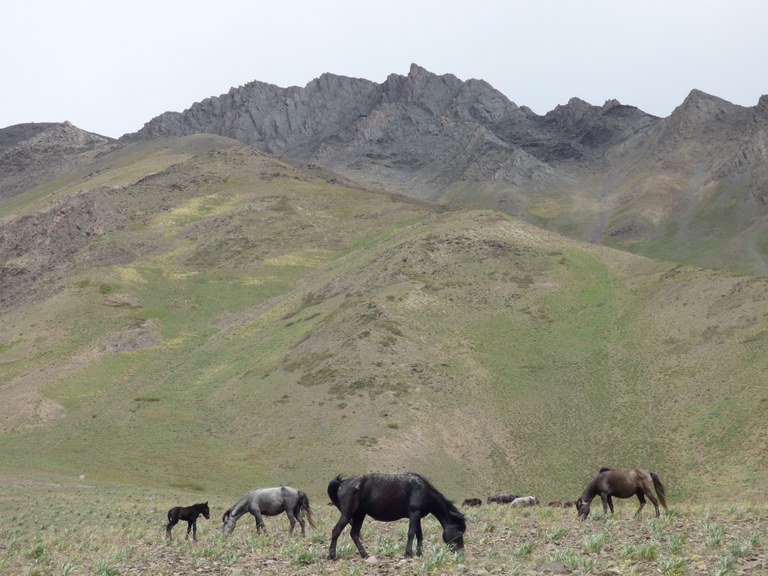 Tarachand’s flock had grazed and browsed in the forest surrounding their home for a couple of months before the journey to their high summer pastures. Although there was enough forage in Rupi, the animals didn’t thrive in the monsoon wetness. They fell sick easily and the water-swollen vegetation didn’t provide enough nutrition. Shepherds escaped the monsoon to the cold desert.

Some pastoralists discontinued the annual crossing of the ice-bound pass, tending their animals in the lower elevations of Rupi and Bhabha valleys and settling for lower returns.

Since the 1980s, many shepherds sold their flocks altogether to become sedentary apple growers. They earned between Rs 4,00,000 and Rs 20,00,000 a year from the fruits, depending on their holdings, weather, and market prices. This income was far better than any they earned from livestock.

Shepherds like Tarachand, who didn’t have enough land, rented these meadows from their fellow clansmen, paying up to Rs. 25,000 for the season. To make up for this investment, they also grazed livestock belonging to others for a fee. Of Tarachand’s 1,100-strong flock, only 110 were his own animals while the other three shepherds in his group owned between 50 to 100 each. More than half the stock belonged to others. Pastures that hosted 400 to 800 animals in the old days now had 1,000 to 1,300 animals.

In the pastoralists’ own reckoning, they used the grazing lands excessively. Numerous forage plants disappeared, and unpalatable – even poisonous – ones took root and were spreading. Climate change compounded the problem.

The shepherds needed more pastures to sustain their flocks. Some ventured into new areas in Spiti such as Ensa and Kaza. Others coped by switching to goats that ate pretty much anything and fetched higher prices.

To add to the existing problems, a crisis might be brewing for the shepherds. Climate change hit apples also. The temperate fruit required a 90-day chill and snowfall of at least four to five inches. Even as more people switched to this high-profit crop, many apple-growers in Kinnaur already complained of falling yields. With diminishing profits, Kinnauras who had given up livestock may be forced to return to livestock rearing. Would they have adequate pastures?

The highly-prized Chumurti horses of Pin Valley grazed in the same alpine meadows. Displeased villagers accused the shepherds of mismanaging the pastures. While the shepherds moved on to more productive areas, the villagers were left with the degraded land. These problems reared their heads at the meeting to decide Tarachand’s fate. 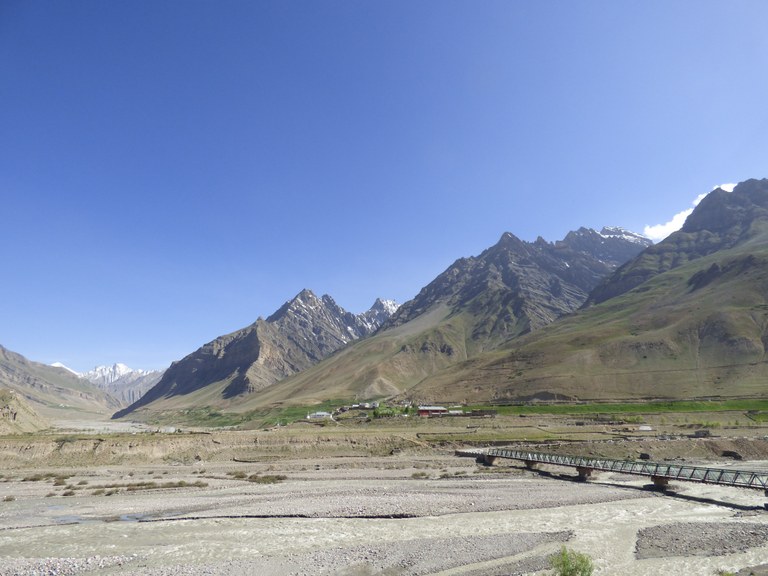 Sagnam village and the bridge over the river Pin. Credit: Janaki Lenin

Wildlife biologists were also concerned about the quality of pastures at these high altitudes. Increasing numbers of livestock competed with wild herbivores such as the Himalayan ibex and bharal. Desert plants grew only during the short summer months. When livestock chomped them up repeatedly, the plants got no chance to flower and set seed. Nor was anything left for wild animals.

The NGO already runs a similar project in Kibber and a few other villages in Spiti. Women knitted and crocheted woollen products during the long winter months. These were sold to international customers on the Snow Leopard Trust website. The money went straight to the villagers. The goal of this enterprise was to offset the losses caused by wild predators.

Could a similar scheme work towards a different end? If the pastoralists earned money from such products, would they curb livestock numbers? Most of the interviewed shepherds agreed. After all, reducing livestock numbers on these lands was in their interests too. Neither the shepherds nor villagers who lived low consumption lifestyles in these remote mountains can do anything about climate change. But they can limit over-grazing.

After Tarachand made his appeal and stepped aside, the villagers debated whether to give him access through the village. “Take pity on him,” one said, “and let him go through. It’s not his fault that the ice bridge melted.” Others nodded their heads in agreement. “These shepherds don’t obey any of our rules,” countered another. “They bring 1,500 animals and say they have brought only 500. Enough is enough.” The rest were swayed by this argument also. Finally, at 3 a.m., they reached a consensus. They refused permission. He became the scapegoat for their dissatisfaction with the Kinnauri shepherds.

Tarachand and his four fellow shepherds had trekked about 10 kilometres a day for 10 days, often eating no more than a single meal. If a dislodged rock hurtled down the slope and hit an animal, they had meat. Otherwise, their fare was a pile of rice or a stack of chappatis with watery kadi made from sheep or goat milk. Occasionally, potatoes and dhal livened up the meal. Vegetables and fruits were a luxury. They ate frugal meals even as their animals gained fat. They were exhausted.

A few sympathetic villagers advised a dejected Tarachand to climb upstream. There might be an ice bridge farther up. Left with no choice except turning back, he took their advice. Climbing up the mountain would add several kilometres more to his two-day march to reach his pasture.

It was early afternoon when they found an ice bridge. Goats streamed across first, followed by sheep and the shepherds. Tarachand driving four cargo-laden donkeys brought up the rear. He had made it this time. 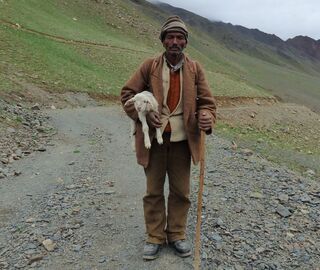 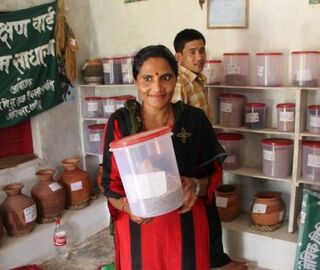