Part 2: Many villages where the malarial burden was high were left entirely untouched by the state's health machinery, leaving a vast population of people with asymptomatic malaria infections who were never treated.

Odisha with just four percent of India’s land area and three percent of its population, accounted for over 40 percent of the country’s total malaria cases in 2016. Over the next two years, the caseload decreased by 90 percent, mortality declined by 83 percent and the positive-test rate — malarial confirmations per 100 samples tested — dropped to 1.03 in 2018, compared to 6.23 in 2017.

“We realised that the existing guidelines, meant for the entire country, weren’t suitable for our needs. We had to create a new model. It was an experiment. And it worked,” explained an official with the National Vector Borne Disease Control Programme (NVBDCP) in Bhubaneswar who asked not to be named as they were not authorized to speak to media.

For the state, and the country, the stakes couldn’t be any higher. Consider this: In 2016, India accounted for nearly 90 percent of the total malaria cases in the Asia-Pacific region and Odisha singlehandedly accounted for nearly a third of the total cases in the region, as per the World Health Organization (WHO). For years Odisha struggled as other states saw their malarial incidence go down.

The model the NVBDCP official referred to was started in 2013 as the "Comprehensive Case Management Project" (CCMP) – which the Indian Council of Medical Research (ICMR) and NVBDCP have since said should be replicated across the country. The project used a “quasi-experimental design," pairing two blocks — one that served as a control that would see the existing programme with another where interventions would take place. It led to two surprising findings. First, that there were villages where the malarial burden was high that were left entirely untouched by the health machinery; and second, and that there existed a vast population of people who had malaria but showed no symptoms and acted as "reservoirs" of the disease.

It was in 2008 that Odisha began its anti-malarial programmes in earnest. By 2010, the political will and finances on the ground were buoyed by the presence of a massive network of Accredited Social Health Activists, or ASHA workers — trained community health activists. With India’s anti-malarial strategy hinging on early case detection and complete treatment, officials urged those with a fever to reach out to these health workers. The ASHA activists had been trained to treat malarial infections and were armed with rapid diagnostic tests (RDTs) and anti-malarial drugs.

This, in theory, should have brought down malaria numbers. But the reality on the ground was slightly different. From 2010 to 2013 there was a 42 percent fall in malaria cases (from 395,651 to 227,990). But malaria endemicity in half of Odisha’s districts remained stubbornly high, with an annual parasite incidence — new infections per year per 1,000 population — of over 10.

With outbreaks of different vector-borne diseases (VBD) over the years (those illnesses transmitted by insects such as mosquitos, ticks and fleas), officials soon realised climate change would only hasten the outbreak of these illnesses and it was time to take a cold, hard look at the impact of its malarial programmes.

In the CCMP, the blocks were stratified on the basis of malarial incidence and the interventions included ensuring that there were enough rapid diagnostic tests and antimalarial drugs at the village level, the capacity building of health workers and ASHAs, the setting up of microscopy centres at the primary healthcare level and mass screenings and treatment in poorly accessible areas.

Almost immediately, two key issues were identified. First, that Odisha’s topography — of hilly forested areas with perennial streams that had high humidity and heavy rains — was conducive for mosquitoes to prosper, and also these areas had far-flung hamlets, often atop hills virtually inaccessible by healthcare workers and often cut off completely during heavy rains. Second, the government realised that those who lived there — marginalised tribal communities who often depended on the forest for their livelihoods — had a high burden of asymptomatic malaria and acted as “silent reservoirs of the disease.”

At Kerpai village, in Rayagada district of Odisha, for instance, villagers told News18 that ASHA workers hardly ever travelled to these parts. Hamlets atop hills where a few families lived would inevitably be ignored.

“Also, we have had floods in the past few years…when the village is entirely cutoff,” said Hemanta Majhi, a local resident. 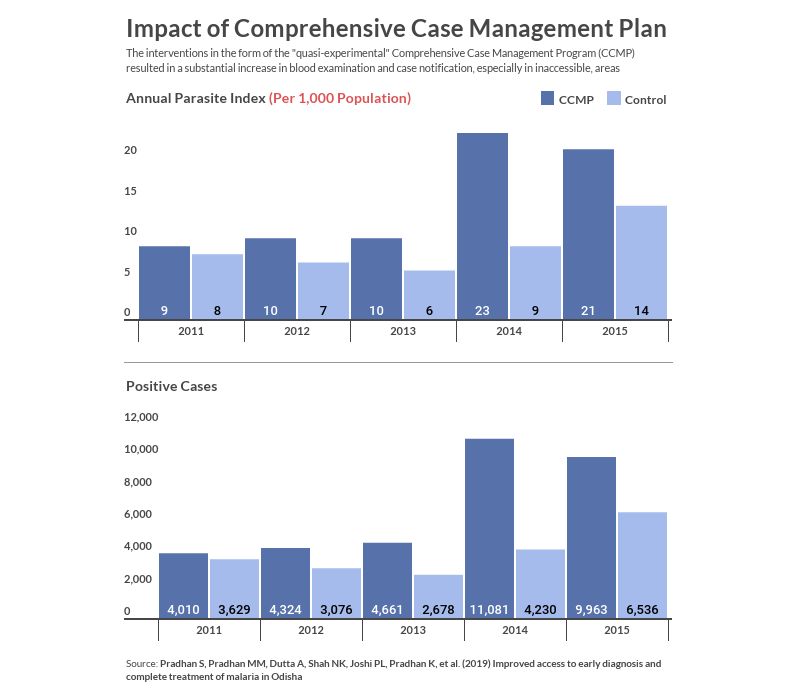 Dr Kaushik Sarkar of the international nonprofit Malaria No More, which partnered with the state government in September, explained the risks of asymptomatic malaria.

“In high-burden areas, humans are a factor. That is because the parasites stay in the blood, but the person shows no symptoms. But it causes anemia and malnutrition. So, other complications can take place, and they continue to contribute to the reservoir of malaria because they are not feeling anything.”

For officials, this was the missing piece of the puzzle – that malaria persisted in remote, inaccessible villages where a combination of poor surveillance and asymptomatic malaria cyclically fuelled the state’s disease burden. The government, in response, conceived the "Durgama Anchalare Malaria Nirakaran" (DAMaN), or Remote Area Malaria Elimination programme in 2016 and operationalised it the next year to coincide with the state receiving over 11.13 million long-lasting insecticide nets from The Global Fund to Fight AIDS, Tuberculosis and Malaria (GFATM).

At its core, DAMaN has three basic principles: The mass screening of populations aimed at the simultaneous killing of all malaria parasites, treating all positive cases irrespective of symptoms and reducing the population of the infected mosquitoes by measures such as long-lasting insecticide nets (LLIN) and indoor residual spray (IRS).

“When the bed net usage is high, and we estimate the usage to be 2.5 people per net, then the dependency is no longer on killing the mosquito. You’re creating a barrier and eliminating the parasite pool in humans,” said Sarkar.

The country’s malarial guidelines don’t mention asymptomatic malaria and screening the entire at-risk population is out of the question. “At a time when the country is not being able to take care of those who are showing the symptoms, how can you expect them to screen everyone? It is a matter of logistics,” said the NVBDCP official.

DAMaN operated on a “camp model,” where the entire health system would move to a village for a time to identify infections before rotating to another location. “Had those camps not happened…then three cases of asymptomatic malaria can become 30 very fast,” the official said, adding that the government was not concentrating on “identifying the foci of malaria and concentrating the efforts there."

During the first two phases of the programme it focused on screening the entire population, while in the third phase only children below the age of five, pregnant women, and lactating mothers were targeted.

“Malaria is also an indirect cause of maternal death and is also linked to low-birth babies. Pregnant mothers and young children are more at risk…so we have to take more care,” said Mithun Karmakar with the National Health Mission-Odisha, adding that ASHA workers are further trained to ensure that they “properly able to counsel mothers and other [high-risk] people.”

Since then, the scheme has reached out to 1.6 million people living in high-risk areas of the state. In most villages it found the rate of asymptomatic malaria was extremely high, ranging from eight per cent to 80 percent.

But while the gains in Odisha have propelled the country forward in its journey to eradicate malaria, and the Odisha model is being adopted nationwide, the converse is also true. MM Pradhan, of the state vector-borne disease control programme (SVBDCP) who is posted in Boudh district, warned of the risks of complacency. The LLINs need to be replenished over the coming months while additional nets need to be given to those who were left out during the original distribution, he pointed out.

“Ideally, we should be making the nets ourselves in India. That reduces dependence. Right now, there are lots of external factors which could lead to the delay in procuring these nets and, in case there is any such delay…you’ll see the gains being lost.”

He warned of unseen threats like growing drug and insecticide resistance, increasing frequency of extreme weather events cutting off entire villages from access to healthcare and communities still not entirely understanding the mosquito-malaria relationship.

“There is absolutely no scope for complacency. What Odisha has achieved is historic…it is showing the country a path…but we must not forget that there could just as easily be a rebound,” he said.

This is Part 2 of a four-part series examining how climate change is impacting the spread of deadly diseases in India. The complete interactive package first appeared on News 18 on 30 Dec. 2019. Each piece was produced with the support of Internews’ Earth Journalism Network. Production and graphic visualization was done by Fazil Khan.