This video documentary tells the story of how an entire community — unaffected by a global pandemic — returned to the life of their ancestors deep in the Anaimalai Hills.

Part 1: Returning to the forest

As nationwide lockdowns for the COVID-19 pandemic were sweeping across India in March 2020, S. Thanaraj, the tribal rights activist, reached out to the forest dwellers in the Anaimalai region. He asked if they needed anything.

He imagined that the tribes were suffering. Did they require any help getting their basic necessities? Thanaraj was surprised when the tribal leaders asked him the same question.

"We can manage here without any shops around. How are you managing in town?" they asked him in return. Thanaraj was shocked.

“During this pandemic, people living in urban areas experienced fear, hopelessness, and depression,” said Thanaraj. “The cities abandoned its people.”

On the other hand, the tribes living in the forest didn’t need anything.

“There is no connection between coronavirus and us,” said Mallika, a tribal woman.

Mallika said that while people living in urban areas were out of groceries, she could get vegetables, honey, fruits, and tubers from the forest.

“We feed ourselves and our kids with these foods. Hence, there is no need for us to fear coronavirus, lockdown, or any other pandemic,” Mallika said.

They believe that the forest — Kadu — and their Kadar tribe are the same. Having lived in the forest for centuries, they regard themselves as the forest’s ancestors and protectors.

It is also where they can make a living, harvesting honey for sale

Placing stones inside tree openings, the tribes create the conditions to attract honey bees to construct their hives.

“We have to stay inside the forest for at least five to six days to harvest four to six liters of honey,” said Malathi of the Kadar tribe as she sat with her children in a forest clearing.

The forest is their source of food and shelter. But despite there being millions of trees and natural wood available these tribes use only sticks of bamboo. Bamboo is central to how they cook and catch their food and even make their tea.

Their homes are made from bamboo. The children play with bamboo toys.

“We cook with the same fire and eat with the light from the fire. There’s no electricity or artificial lights,” said Sakthivel of the Kadar tribe.

Part 2: The struggle to remain

According to tribal activist Thanaraj, the Kadar tribe has faced forced evictions from the forest.

Video footage from August 2019, shows a removal by forest officials in Anamalai. Crying children and wailing women are heard off-camera.

“Don’t we have any laws or government to prevent these atrocities?” a desperate voice asks.

A reason given for evicting the Kadar tribe is that the area is a tiger sanctuary. The tribespeople are placed in the cottages of tea-estate workers in nearby Valparai.

The Kadar tribe is designated as a Particularly Vulnerable Tribal Group (PVTG) in Kerala, which ensures them habitat rights under the Forest Rights Act 2006. The same status has not been accorded to the tribe in Tamil Nadu.

“It’s their birthright to remain in the forest,” said Thanaraj. “Forest officials must uphold the rights granted by the United Nations and the Constitution.”

According to a government official from the Anamalai Tiger Reserve, title deeds are necessary for the tribes to remain in the forest.

“We had prepared title deeds for the families… and forwarded it to the district administration,” the official said.

“We made a hut to live inside the forest. The officials came and told us that they’d allocated a cottage for us in the tea-estate,” said Sundari, a Kadar tribe woman.

As they waited in the tea-estates, the tribes were told that they would be allowed to return in a few days. At the time of this interview, six months have already passed.

“But now they’re quoting some laws to prevent us from our living rights,” said Rajalakshmi, a leader of the Kadar tribe. “For us, living inside the forest is the only way of living.”

And so the tribes continue with their wait to be allowed to return to the forest.

On Aug. 15, 2020, during the COVID-19 lockdown, the tribal people held a sit-in to reject the forest department’s evictions. Undeterred by the government, they also took their protest to the streets of Valparai.

The tribes say that despite The Wildlife (Protection) Amendment Act of 2006 that created the tiger sanctuary, the rights of the forest dwellers should not be affected. The Forest Rights Act 2006 further preserves their right to be in the forest.

“The Tribal Welfare Department seems to have no understanding about the act,” according to V.P. Gunasekharan of the Tamil Nadu Tribal People Association.

“It has been nearly 13 years since the law passed. The people didn’t reap any benefits from it. Hence, the protest,” explained Gunasekharan, who was at the rally in Valparai.

The forest dwellers were joined by the town residents who went on a voluntary strike in Gandhi’s tradition. The crowd carried a portrait of Gandhi to the district office.

“Gandhi is the one who taught us non-violent protest,” said Rajalakshmi. “We knew this only after our children went to school.”

Gunasekharan warned that the forest officials alone cannot look after the forests and ensure their preservation. “They must join hands with the tribes for joint forest management to protect the forests,” he said.

Far away from the digital world, the tribes are starting conversations in sustainable living amongst flora and fauna. They are mindful of the trees and the wildlife that lives within the ecosystem.

“They speak with the tree and seek permission from the tree before they cut it down,” said Thanaraj. “They sacrifice themselves to conserve the trees and the forest.”

“We don’t have a religion like those in the outside world,” said Rajalakshmi. “Forest is our God. It is our religion.”

According to the tribes, the forest is safe only when they are inside of it. And vice versa.

Thanaraj pointed out the virtue of the Kadar tribe’s mantra and said the public must learn from their example.

“We have to live a sustainable and simple life, just like the tribes. This is what the pandemic has taught us.”

Watch the full documentary by journalist Naresh Green and videographer Sharan Chandar S as it aired on Kalaignar TV News. Reporting for this story was made possible in part by a grant from Earth Journalism Network.

Banner image: Sundari, a member of the Kadar tribe, explains the route across the forest hills / Credit: Sharan Chandar S. 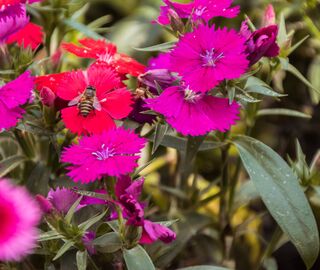 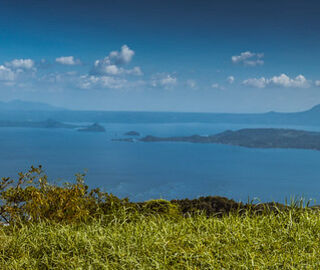 Philippines
Leonard Co, Episode 2: Bury Me Where The Trees Are 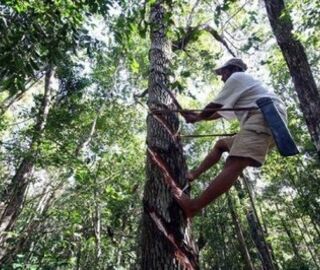 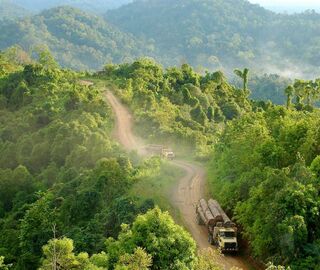