As night falls, scores of timber trucks line up at a weighing station outside the city center here, one of the last rituals before the long road trip to the port city of Douala, nearly 600km away.

Every day, trucks like these, with logs of timber stream through bumpy earth roads onto the highway at the dead of night; and head to Douala, from where they are shipped to foreign markets.

“The East region is very rich in timber,” says Andre Lepot, a resident in Batouri, a town that has become known for timber exploitation, more than anything else. “We have seen this happen since we were kids.” 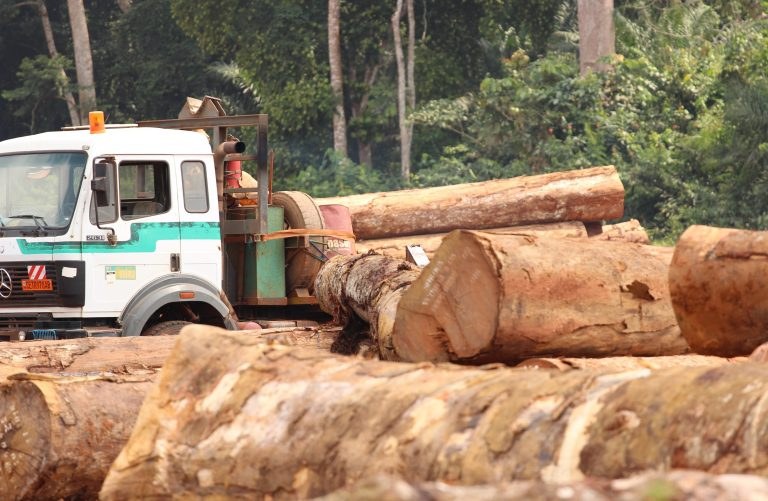 A truck waits to be loaded before embarking on the 600km journey from eastern Cameroon to the port city of Douala. Photo Credit: Nforngwa/Africa Assignments 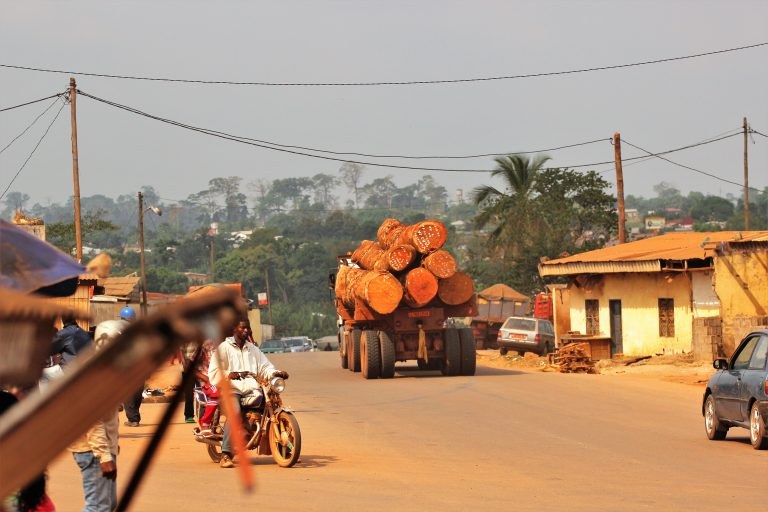 A truck loaded with timber on its way to the port city of Douala. Photo Credit: Nforngwa/Africa Assignments 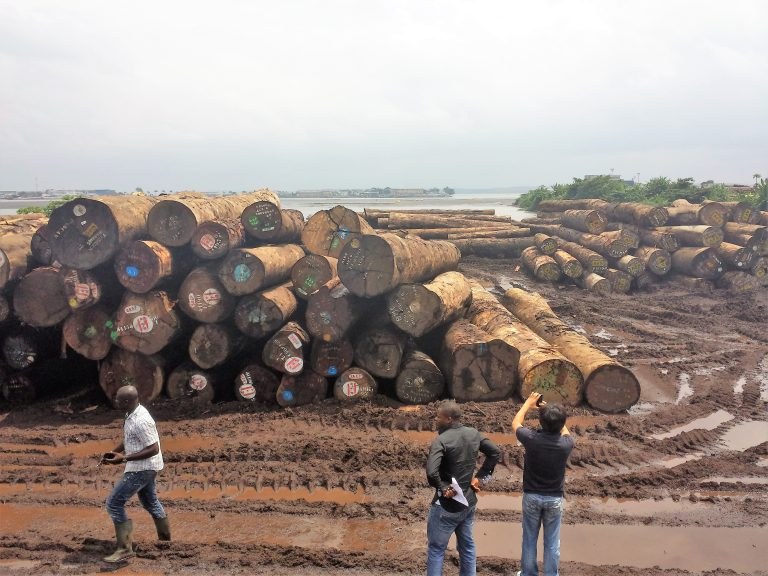 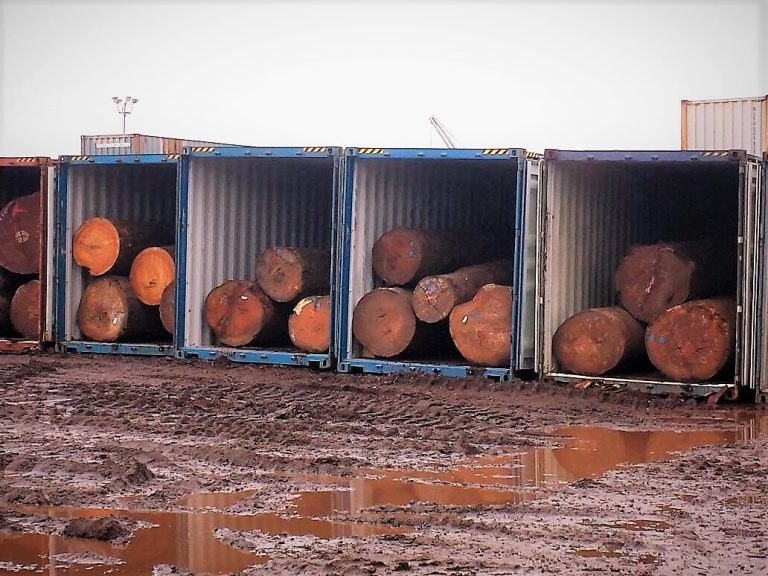 Logs at a depot at Cameroon’s port city of Douala waiting to be shipped out of the country. Photo credit: Nforngwa/Africa Assignments

Timber is Cameroon’s second most important export commodity after crude oil. In the past decades, logging has increased, attracting Chinese, Lebanese, French, and other foreign companies.

The country is one of the leading exporters of tropical timber to the European Union.

“We have observed a surge in timber trade activities with the increased presence of foreign timber business operators especially from China and Indonesia in the sector,” says Bernard Njonga, coordinator of the Local Development Initiatives Support Service, an NGO in Cameroon.

“Cameroon’s forest has continued to be logged to feed the country’s growing timber market.”

Logging in Cameroon is shrouded in illegality. Illegal timber exploitation is severe and getting worse in the country, say officials and environmental protection workers.

“Without being an expert, I can say that before exploiters fell only large trees,” says Ze Vina, a resident of Ebolowa in the South region, another timber exploitation center. “But today we see timber of all dimensions transported away in trucks.”

Ze describes Cameroon’s timber sector as anarchic. Both legal and illegal exploiters are involved in unlawful activities, particularly harvesting timber below the legal size, and outside designated concessions, he says.

“Illegal forest exploitation and logging business in the country has been compounded by ineffective and discriminatory law enforcement,” says Njonga. “This betrays the sincerity of the government in forest governance reforms.”

In the East and South regions, vast expanses of forests now lay bare, one of the main consequences of rampant and illegal exploitation.

According to Global Forest Watch, an online forest monitoring platform, Cameroon lost 657,000 hectares of forest between 2001 and 2014, with the annual rate of loss rising over the period to around 141,000 hectares in 2014.

“The government does not respect its laws and many forest malpractices go unpunished,” Augustine Njamnshi, board member of the Pan African Climate Justice Alliance, PACJA told InfoCongo in an interview.

“When laws are not implemented or are implemented selectively, then there is injustice, and this weakens the legal system in the country.”

“Cameroon is a state of law, and so for any forest governance reform to yield the expected results, the laws must strictly be respected,” he says.

Apart from the European Union imposed monitoring system, the country lacks a credible forest law enforcement mechanism, a situation that has continued to drive illegal logging and forest depletion.

Several control points have been set up on the route from the forest to the port city of Douala. But corruption means that tons of illegally felled timber still makes it to markets in Europe and Asia.

Timber is central in the country’s development agenda. In the last few years, Cameroon has invited multiple foreign investors in large-scale investment projects as the country drives towards economic growth.

Unfortunately, many of these investments and potential investment opportunities are nestled in the heart of the country’s productive forest spans. In many cases, the projects are not only breeding conflicts between investors and forest communities, but also fuelling illegal activities.

There is thus increasing environmental footprint of these foreign investors in Cameroon and government’s heavy reliance on them for funding of its multiple ongoing infrastructural projects has made the country vulnerable to illegal practices.

“In many instances, the government is helpless in dealing with cases of illegal logging by these foreign business operators,” says Samuel Nguifo, Executive Secretary of Center for Environment and Development.

With the country facing serious development challenges, there is a growing quest for and reliance on foreign capital, and it is thought this dependence has led to oversights on illegal activities especially in the exploitation of forest resources in Cameroon, Nguiffo explains.

A May 2016 World Bank/IMF report indicates that Cameroon has an accrued external debt of US$5,289 million and is ranked 10th among 42 African nations whose debt statistics were studied in 2016.

Experts see the dependence on foreign investors as a significant threat to the country’s willpower to strictly control illegal practices fueling corruption and poor governance in the forest and natural resource sector.

Like in Cameroon, sustainable management of forest resources has been perilous in many countries in the Congo Basin region. Environment experts argue scaled up support for governance reforms that need to be at the heart of government forest management programs are virtually absent. 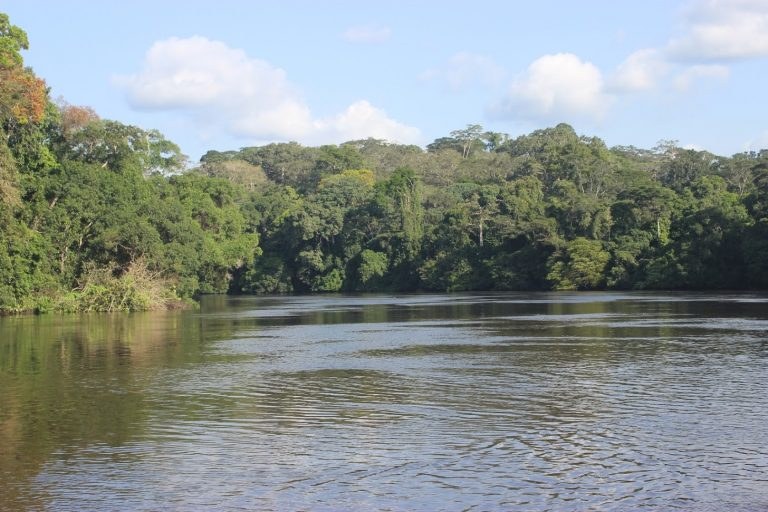 Like in Cameroon, sustainable management of forest resources has been perilous in many countries in the Congo Basin region. Photo credit/InfoCongo

Environment experts are worried that the growing illegal harvesting and trade of timber will have devastating impacts on the environment and contribute immensely to global warming which is currently threatening the Congo Basin and the world as a whole.

Thus, the promotion of sustainable forest management is imperative to create and preserve jobs and contribute to improving rural livelihoods, protect the environment, mitigating climate change, preserve biodiversity and above all reduce poverty, experts say.

Some European countries have urged Cameroon to reinforce its laws on forest exploitation and timber trade.

Cameroon was one of the main sources of tropical wood imports to the European Union in 2014, at around a fifth of the total, followed closely by Malaysia, according to EU data.

Britain recently imposed or warned of sanctions on 14 UK importers believed to be illegally sourcing wood from Cameroon, according to Greenpeace.

That followed a similar move by the Netherlands in early March 2016 demonstrating that timber from Cameroon is “coming under increasing scrutiny in international markets,” Greenpeace said.

“Cameroon’s authorities must examine this new set of sanctions and start investigating the companies in question as a first step to tackling the illegality and corruption in the timber sector,” said Eric Ini, Yaounde-based Forest campaigner for Greenpeace Africa.

In 2009, Cameroon appointed an independent observer, NGO Agreco-CEW, to oversee the allocation of forest concession. But its recommendations are not implemented, according to Samuel Nguiffo.

A May 2016 report from Greenpeace, for example, said Cameroon’s timber exporter Compagnie de Commerce et de Transport (CCT) had sourced wood from La Socamba, a company logging several kilometers outside its designated area, which it sold in Europe and China. 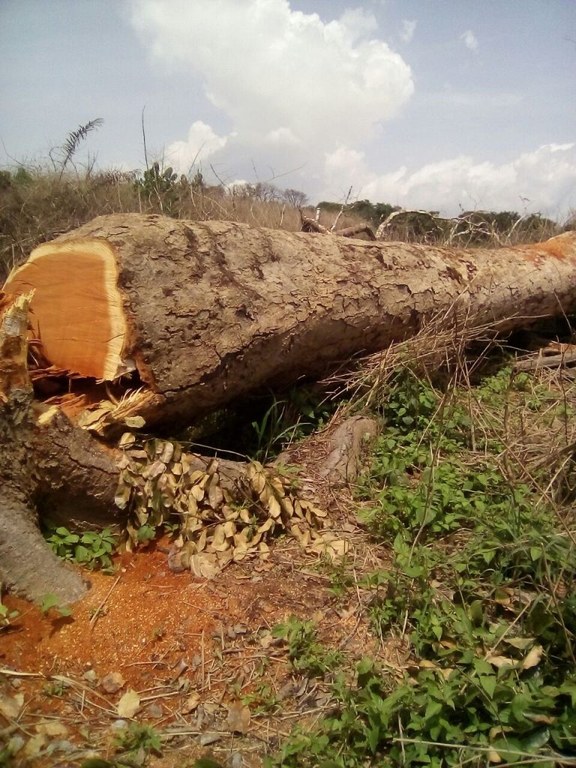 CCT and its suppliers are now facing an audit, which has yet to be officially announced, Greenpeace said at the end of June.

In what looks like bowing to pressure from the European Union and forest governance stakeholders, Cameroon government has suspended 23 forest exploitation companies and two community interest groups (GICs) working in the logging sector for six months, a November 09, 2016 release by the Minister of Forestry and Wildlife stated.

The sanctions according to the Minister Philp Ngole Ngwese, generally relate to the non-compliance with sustainable management standards such as breach of the terms of reference, the exploitation or fraudulent use of the forest resources.

The suspension, which involves “the immediate cessation of activities, will not be lifted until after the close of the litigation opened against the offenders, as well as the payment in full of the charges that will be levied against them,” the minister said in a statement.

Minister Ngole Philip Ngwese also threatened to withdraw the authorization in the event of non-lifting of the suspension due to the continuation of activities after notification of the measure or a new offense in the last 12 months following the infringement leading to suspension.

Officials of Etamfa Sarl and Entrepise Forestiere du Cameroon, two of the companies suspended for illegal logging refused to comment when approached by InfoCongo.

In a similar sanction in 2012, the Cameroon Treasury recovered the sum of CFAF 1 billion, compared to CFAF 100 million a year earlier, representing the fines imposed on operators for violations of logging regulations, statistics from the Ministry of Forestry and Wildlife showed.

The government says it is working with other stakeholders to strengthen control measures against illegal logging. Among these measures is the increase of forest guards on checkpoints along the road from the East region through the South to the shipping port in Douala. 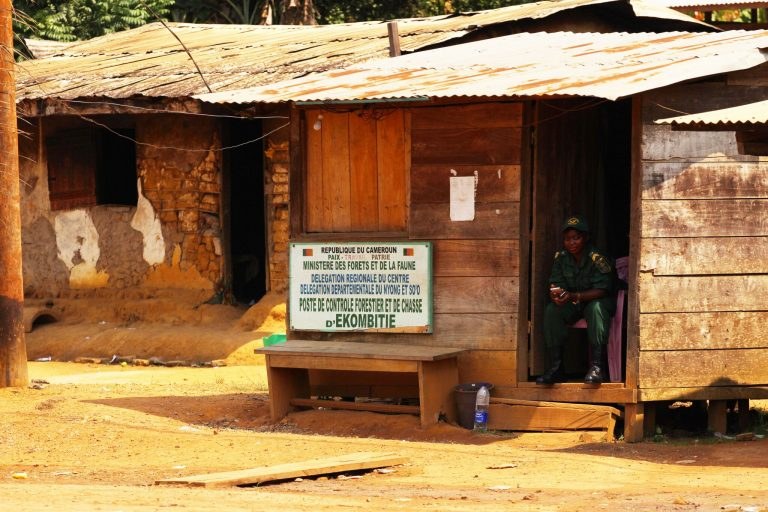 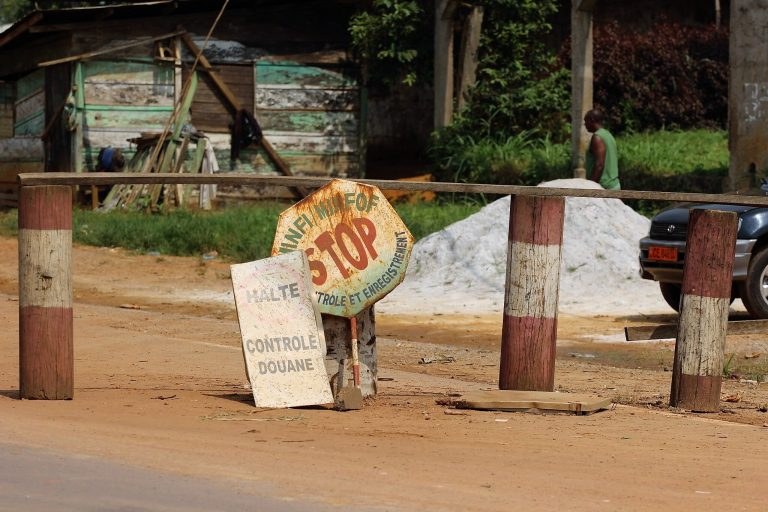 The Kadey Divisional Delegation of Forestry and Wildlife, Bangya Dieudonne admits “illegal exploitation of wildlife and logging activities existed in the region but said the government was intensifying and renewing its strategies to combat the scourge.”

“The government is training and deploying more guards in the field to intensify control. Many youths here have received training to detect and report cases of illegal logging to us and the forces of law and order,” said Bangya.

Officials of FODER, an NGO in forest protection in the region that carried out the training also attest monitoring of illegal forest activities has intensified.

“Forest people, mostly youths have been trained and equipped as community observers to report what they see in logging activities to help save the forests. These residents are on the frontline of the fight against deforestation. We call them the rainforest defenders of Central Africa,” Rodrigue Ngonzo from FODER told InfoCongo.

He said the training provided communities and civil society with new tools to monitor changes in forest use and their environment so they can inform local authorities and the forces of law and order in real-time for prompt action.

According to officials of the Ministry of Forestry and Wildlife, empowering forest people, taking climate action and protecting forest resources are at the heart of changing the new narrative and putting government activities firmly on the path to sustainable development. 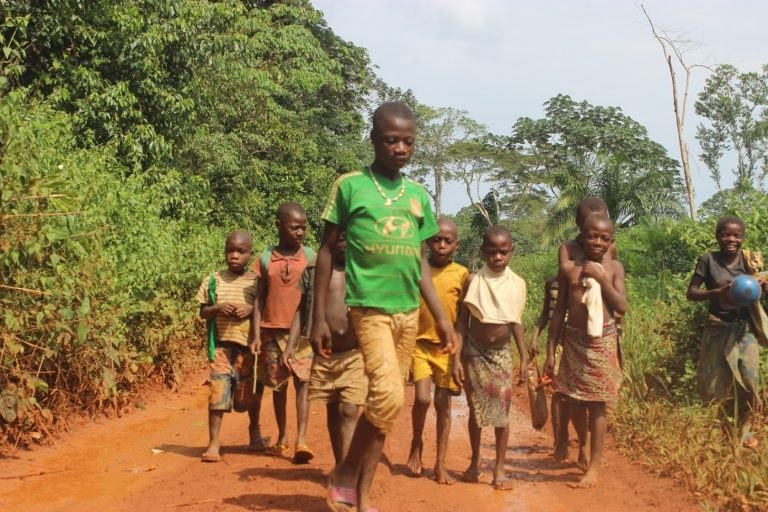 Logging activities, it is argued sometimes result in improvement of standard of living of communities, but in many cases in the Congo Basin, it ends up undermining the livelihoods of local and indigenous communities. Photo credit/InfoCongo

Anicet Ngomin, Head of Monitoring, Regeneration, Reforestation and Woodland Extension Unit, in the Ministry of Forestry and Wildlife, pointed out that since the signing of the Paris Agreement on Climate Change, the Ministry has embarked on assessing the gravity of illegal forest exploitation challenges and has intensified interaction with the concerned communities.

“Creating opportunities for an empowered people, capable of taking action and contributing to the protection their forest resources will certainly help in the fight against forest resource depletion,” Ngomin said.