In a spare wooden shelter just metres from the Mekong, Meak Phoeurn smiled, creases stretching from his eyes, and began to croon: “Oh my dear, look at the birds happily flying.”

Phoeurn, an affable 64-year-old who may well know more about Mekong River birds than any other nonprofessional in the country, insists that Sinn Sisamouth was singing about one species: the river tern. 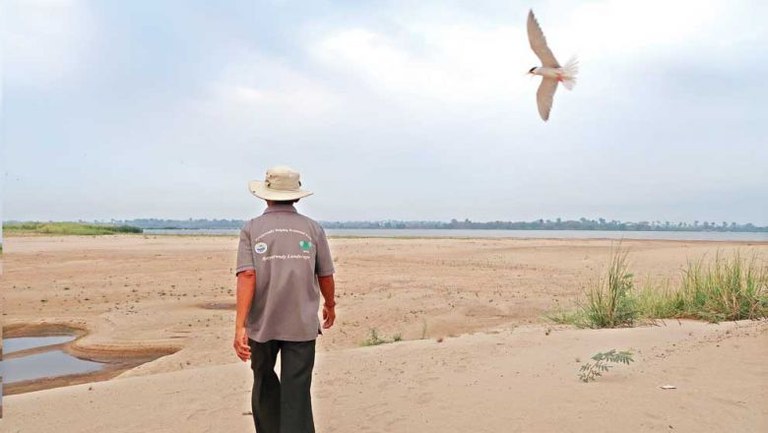 Not so very long ago, river terns crowded the sky above the lower Mekong. They laid their eggs by the hundreds on the low sandbars nestled among the river. To see a pair sitting side-by-side like lovers, and to alert his sweetheart to those slight white birds with their smooth black crowns and yolk-yellow beaks, Sisamouth would have had to do little more than cast his eyes towards the river. Raised in a nearby village, Sisamouth would have found this an everyday scene.

Today, spying those coupled birds is decidedly less likely. As the human population living along the Mekong River has ballooned, the river tern has all but vanished. Eggs have been collected for food at a rate higher than replacement; rats have proliferated, further imperiling egg numbers; and each year more and more water buffalo are allowed to graze and bathe across prime nesting sites. In the first decade of this century, the river tern population here declined by more than 75 percent. It has likely disappeared from Vietnam and Laos altogether. In Cambodia, about 30 pairs remain. With hydropower projects now dotting its habitat, and with more planned, the bird faces an existential threat – and one that looms despite successful recent efforts by community-based conservationists to save the species.

The river tern’s continued existence in Cambodia is thanks in no small part to people like Phoeurn.

Since 2008, Phoeurn, his wife, Chin Loam, two sons, two daughters, three grandchildren and several in-laws have worked as nest protectors. All told, scores of people in Siem Bok district have worked for the WWF-managed program, guarding the nests against humans, rats and water buffalo. Slowly, their efforts have begun to pay off. In 2011, WWF recorded 22 birds in the Mekong Flooded Forest landscape – the 56-kilometre stretch of conservation area between Stung Treng and Kratie. This year, 38 birds were spotted there. 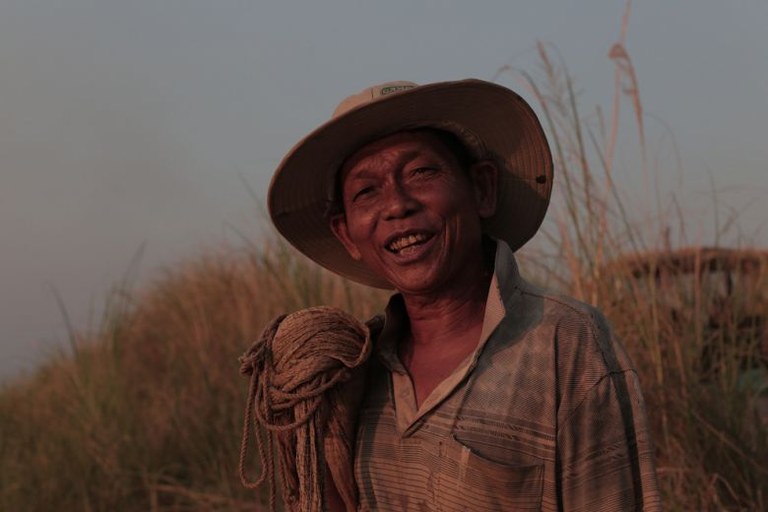 “This is the third year in a row we’ve had some population increase. So that’s just really exciting and rewarding after seeing declines over the last 15 years,” said Andrea Claassen, a conservation science PhD at the University of Minnesota who has been studying these river birds since 2003. “Every time I came out to see the river tern there were fewer than before, until the last three years – we’ve been seeing improvements. The population trend is kind of like a ski jump.”

Claassen, also a technical adviser at the Royal University of Phnom Penh’s Department of Natural Resource Management and Development, scrapes together funding each year to come to Cambodia during nesting season. From January to April, she and her assistants spend as much time as possible camped out on the sandbars along the waterway between Kratie and Stung Treng. They count birds, inspect nests and, crucially, spend long hours speaking with the nest protectors about what is and is not working.

To guard a river tern nest is no small task. The birds do themselves few favours, laying their eggs directly on top of the sand, exposed to all comers. Each nest requires two protectors – who must leave their village and set up camp near the nest for the duration of the season. An egg takes about 25 days to hatch, and chicks take another 25 days to fly. During that time, the protectors encircle the nest with up to 30 metres of fencing, and keep a close eye out for water buffaloes, rats and hungry fishermen. Each day, often several times a day, they will check on the nest. When the chicks hatch, they must shade and water them – protecting the baby birds from overheating even as the temperature of the sand soars. For this, the pair is paid $8 a day. There is a bonus of $10 for each chick that flies away, but if the nest fails at any point, the daily pay is halved.

“It would be difficult to do this job without patience,” admitted Phoeurn.

“You cannot finish it within a night. You need to keep doing it and then you get used to it and you love it and enjoy it.”

Of all the nest protectors, Phoeurn has the highest rate of success. Each year, he and his wife set up camp on a spare, bucolic island located a few kilometres from his home village of Koh Preah. Talcum-fine dunes and rolling grass hillocks spill out into a flat, wide beach teeming with birds.

Each morning and evening, scores of river birds congregate at the water’s edge. Among them, this year, are no fewer than nine pairs of river terns. When Claassen started her survey, in 2010, there were five pairs on this sandbar. 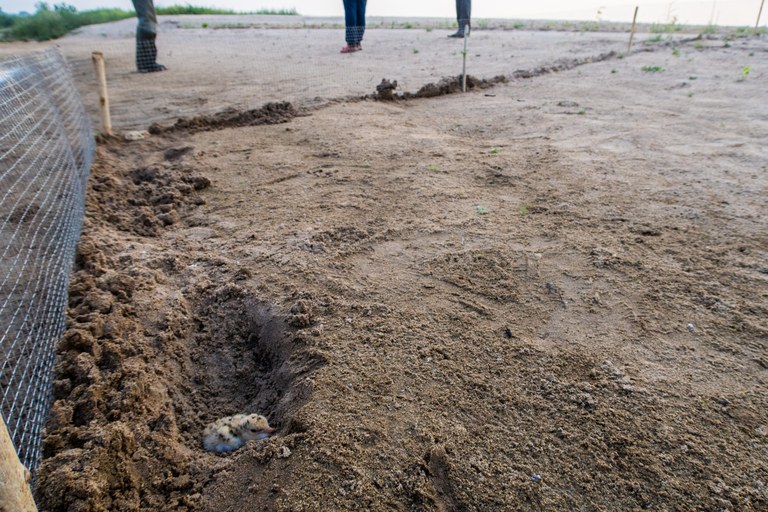 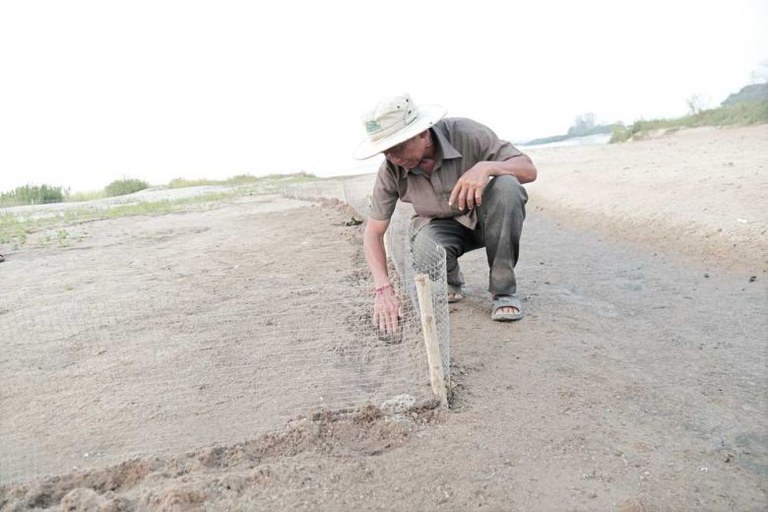 Then four the following year. Then three. Then two. In early March, Phoeurn proudly pointed out a pair of fluffy, half-hidden chicks that hatched only days earlier. In his hand, they were so small they looked like they might vanish.

Phoeurn’s family describes him as unusually dedicated. During holidays and festivals, he stays on the island – shooing his children off, telling them to enjoy themselves. He keeps diligent records of the birds’ progress and keeps tabs on the situation of neighbouring nest sites. In the wooden lean-to where he and Loam stay for the duration of nesting season, he stores plastic folders full of documents pertaining to the project – government MoUs, maps of the Mekong Flooded Forest conservation area, a royal decree.

Hidden from sight, meanwhile, is the birds’ largest threat yet: hydropower. The entire ecosystem lies in the shadow of a dam. To the north, just past the Lao border, is the Don Sahong – a Mekong mainstream dam whose construction began two years ago. Northeast lies the Lower Sesan II, which went online in September, powered by one of the Mekong’s largest tributaries. Rounding out the picture are the proposed Stung Treng and Sambor dams, each just a few dozen kilometres in either direction on the Mekong.

Locations of the Dams on the Mekong that seriously impact the River Tern / Credit: Abby Seiff

Apart from the change in sedimentation, fish are the main source of food for these riverine birds, and study after study show dams will reduce fish stock by blocking key migratory routes. The last MRC Council Study – presented earlier this week in Siem Reap – noted that if all planned lower Mekong and tributary dams were built, fish biomass could drop more than 40 percent by 2040. After Vietnam’s Yali Falls dam became fully operational in the early 2000s, fish catch downstream on the Sesan River dropped, and disrupted water flow shrunk the number of viable nesting sites.

In the intervening years, the black bellied tern – a similarly common sight among those waterways – disappeared from Cambodia. Claassen, who spotted the last recorded pair in 2003, wrote in the Cambodian Journal of Natural History that the upstream dams “were arguably the nail in the coffin for the last Cambodian representatives of the black-bellied tern”. Within 30 years, the bird had gone from “least concern” on the IUCN red list to endangered.

When it comes to the river terns on this stretch of the Mekong, all anyone can do is press on.

“If I don’t think about the dams, I think we have a chance,” Claassen said. “At times, it seems futile, but I don’t think I want to give up since we’ve made progress and the population is up a bit.” 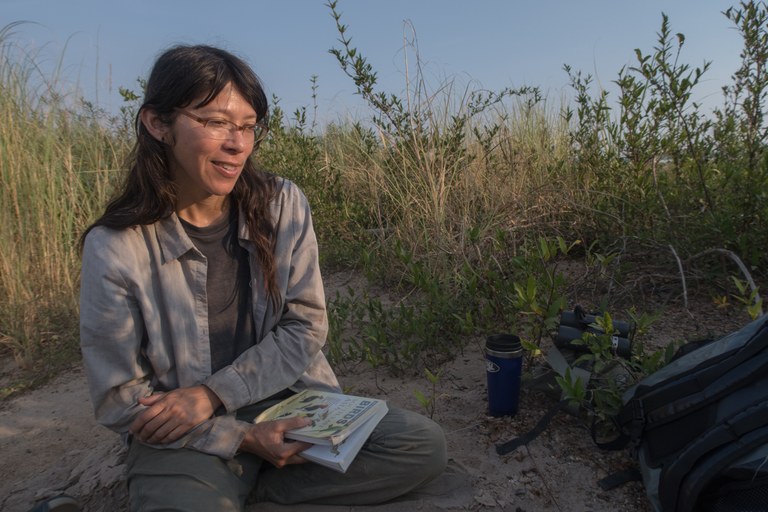 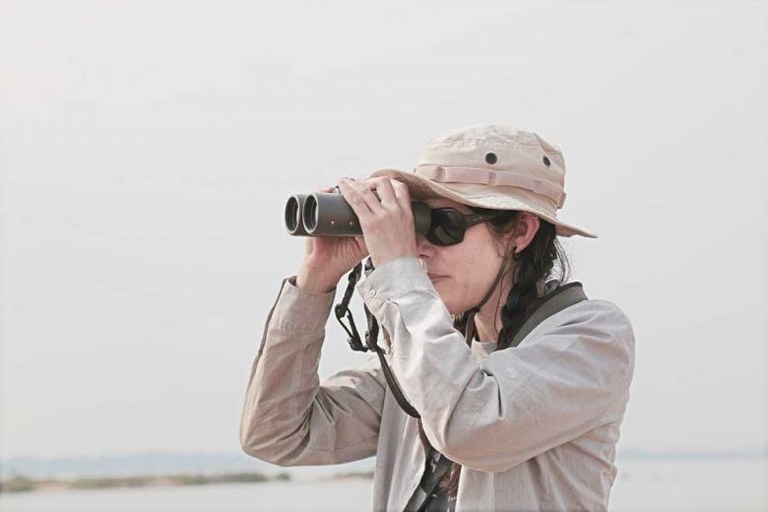 The latest threats have only increased the dedication of Phoeurn’s son-in-law, Soeurn Bun Nhoeurn, who has helped his father-in-law since the nest protection project started. A father of three, Nhoeurn considers it crucial to protect the bird for the next generation, “otherwise, our kids won’t know it”.

In spite of its growing pains, the nest protection program has led to a marked shift in attitude among his neighbours, he said. “The whole community around here understands the importance of protecting the bird nest or not eating the egg. They know because the organisation raised awareness about keeping the bird.”

“River terns have increased remarkably,” he added. “I’m so happy. I can remember, when I was really a young boy, there were so many river terns – they kept laying the eggs close to each other. And as I grew older they disappeared. Now they’re coming back.”

But the gains the conservationists have made are as fragile as the birds’ nests. Fish stocks have already declined sharply since work first began on the Lower Sesan II dam. For Phoeurn, the river tern he has given so much to protect is now symbolic of broader issues facing the region.

“It’s not only the bird who will die without fish, us humans are going to die without having enough fish too,” Phoeurn’s son, Thit Phoeung, said gloomily. “People in rural areas like this, our main food is fish. When they build the hydropower dam it means that they kill us.”

This story originally appeared in April. We've updated it with original photos and map for this site. It was first published in the Phnom Penh Post as part of the Story Grants under EJN's Biodiversity Media Initiative.