Prakash Javadekar, India’s Minister for Environment, Forests and Climate Change, says the country has done a lot to combat climate change, and it is time to tell the world what it has done 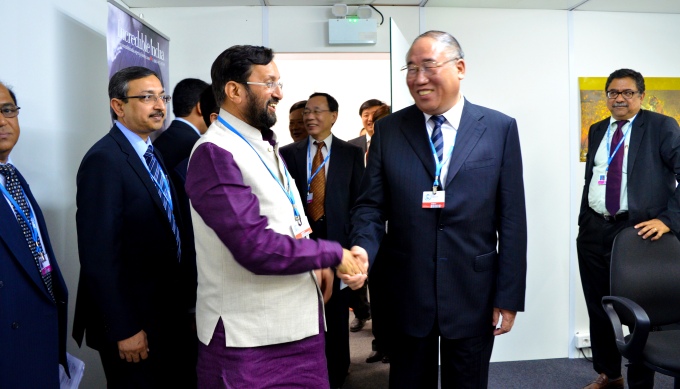 India is participating in the climate negotiations at the Lima summit “with a positive mindset and I have asked our negotiators to be positive because we want this to succeed to prepare a good ground for Paris 2015,” Prakash Javadekar, Minister for Environment, Forests and Climate Change, said as the December 1-12 conference of the UN Framework Convention on Climate Change entered its final week.

With India under global pressure to announce its target to mitigate greenhouse gas (GHG) emissions, Javadekar told indiaclimatedialogue.net, “We will showcase the Indian government’s achievements during the COP (Conference of Parties) here, and they are many. The biggest game changer is the recent announcement by the Prime Minister to install 1 lakh (100,000) megawatts of solar power. For that, we have committed $100 billion in investments on our own.”

The minister contrasted this with the $9.95 billion rich nations have committed to the Green Climate Fundso far, mostly to help developing countries adapt to climate change effects. “They should have done 40 billion dollars by now, 60 billion by next year and 100 billion by 2020,” he pointed out.

The percentage of renewable energy in India’s energy mix will go up from the present figure of 13 to 26 by 2022, Javadekar added.

Environment secretary Ashok Lavasa said, “Of the 80,000 MW of new generation in the 12th Plan (2012-17), 35% will be from renewable sources – solar, wind and biomass. This will go up to 45% in the 13th Plan (2018-22), there will be 110,000 MW generated through conventional means, 100,000 MW from renewables.” If India had planned to generate the same amount of electricity in thermal power plants, it would burn an additional 130 million tonnes of coal every year, with its corresponding GHG emission, he added.

Javadekar said there was “tremendous scope” to add offshore wind power generation as well. “We’ll forcefully put all this in front of other countries before we’re dictated to,” he said, referring to the expectation from other countries that India – now the world’s third highest GHG polluter after China and the US – would also announce specific targets on how it planned the curb its emissions.

Talking about other measures taken by the government, the minister pointed out, “Cement industry norms have been made more stringent, and India is one of the leading cement manufacturers of the world. Then, of course, there is the carbon tax. We’ve already collected $6 billion with the cess at Rs 50 per tonne of coal. When we have coal auctions, this figure will go up.” The coal cess was raised to Rs 100 per tonne by the new government.

“We’ve set higher goals ourselves,” Javadekar told indiaclimatedialogue.net. “And there will be three more things. In the next budget, the Rs 100 crore allocation for the Adaptation Fund will increase. The Himalaya (ecology) initiative already has Rs 100 crore. And very soon we shall have $6 billion for afforestation.” The Supreme Court has frozen this amount meant for afforestation, but Javadekar was confident that it would be released soon. There is a $3 billion clean energy fund as well.

Asked about his recent announcement that India would soon have comprehensive legislation, Javadekar explained, “There are five laws – the environment protection act, the forest conservation act, the water (pollution control) act, the water cess act and the air (pollution control) act. We are bringing amendments to them, and we want to bring all the amendments at one go. This will have considerable co-benefit for climate.” A recent committee set up by the environment ministry – headed by T.S.R. Subramaniam – has recommended a number of amendments. Javadekar said the Subramaniam committee report was “under consideration”. All central ministries and chief ministers had been asked to give their comments.

Going back to India’s ambitious mission to generate electricity from solar sources, the minister pointed out, “Large tracts of land have already been identified by some state governments for this. The cost of solar power has come down to Rs 5.80 per unit in the last auction (compared to Rs 3-4 per unit for coal-based power, without counting costs to human health and the environment). Now we have to create the financial architecture, with proper feed-in tariff.”