The Dongria Kondhs, devotees of their mountain gods in the remote hills of eastern India, are custodians of dozens of vanishing seed varieties. With the region in an agrarian crisis due to recurrent droughts and erratic rainfall, the tribe is on a mission to return to its farming roots and resuscitate long-lost heirloom crops. 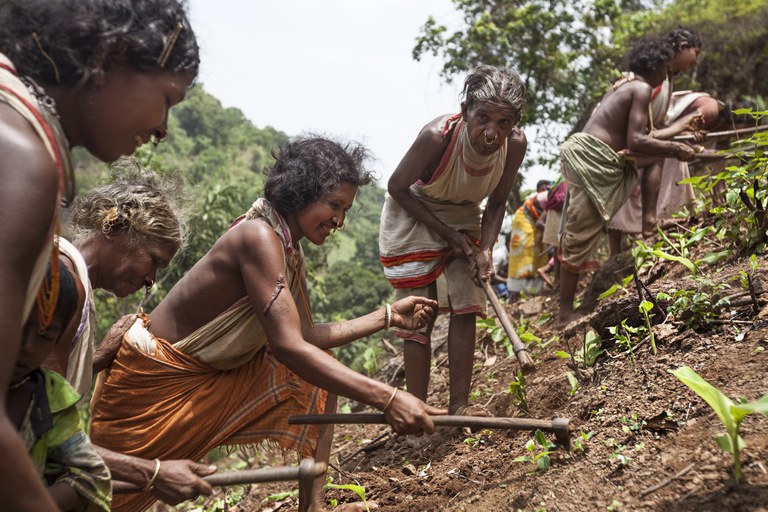 RAYAGADA, India — The sun rose above the jagged spires of the Niyamgiri hills, the sky a wisp of apricot on rolling mounds of green. Trees bent with mangoes and jackfruits dropped manna for the occasional passerby. Around a dirt bend, a warm symphony drifted from a hill slope: the strike of a sickle, the pitter-patter of seeds, shuffling bangles of women unraveling weeds. It was sowing season for the Dongria Kondhs.

The Dongrias, one of the most vulnerable and traditional tribes of India, live in remote hamlets scattered throughout the Niyamgiri hill range in southern Orissa, a state in the country’s eastern limb.

“These are presents from Niyam Raja, the king of all mountain gods in Niyamgiri,” she said.

The Dongrias call themselves royal descendants of Niyam Raja, and their deep reverence for the natural resources that have been conferred on them perfuses their everyday lives.

“As long as we respect our hills, rivers and soil, he will keep us nourished,” she added. 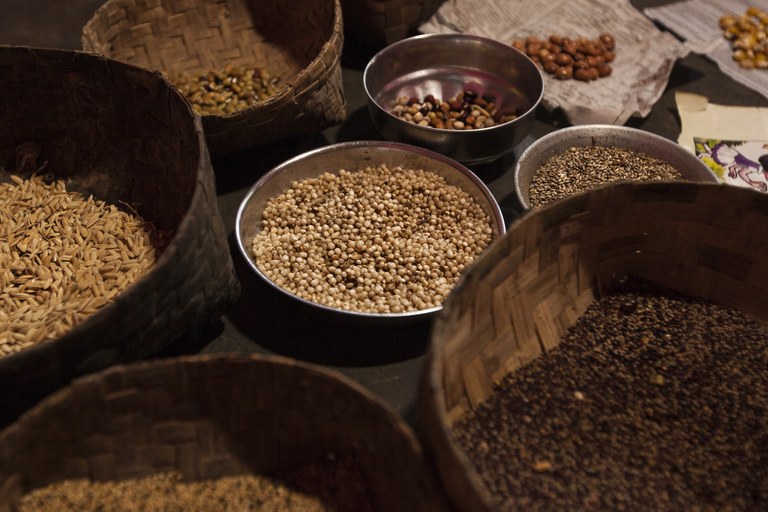 As abundant as Kadraka’s collection is, the Dongria Kondhs once possessed many more varieties of heirloom seeds. But they started losing their self-sufficient food systems when the forest became degraded due to unrestrained logging and the government introduced subsidized high-yielding paddy in the late 1990s. From a diverse indigenous farming system, the Dongrias gravitated toward rice monoculture, losing numerous landrace strains in the process.

“Their mindset shifted from good old co-dependence on nature to productivity,” said Debjeet Sarangi, founder of Living Farms, an Orissa-based nonprofit that works on food and resource management with indigenous communities. “They traditionally farmed for subsistence, but with rice came more mercenary concepts of ‘profit’ and ‘yield.’ They became reliant on commercial seed suppliers.”

The villagers’ consumption also shifted as rice cultivation gained hold and disrupted the nutrient-dense medley of traditional grains and legumes that once filled their food plates. Many communities began a slow descent into food insecurity.

However, with Orissa undergoing an agrarian crisis due to recurrent droughts and erratic rainfall that affect water-intensive crops such as rice, the Dongria Kondhs are on a mission to return to their farming roots. With a renewed sense of their rights to the forest after ousting a U.K.-based mining company in a much-publicized resistance in 2013, and a little help from grassroots organizations such as Living Farms, the tribe began resuscitating lost seed varieties soon after. The Dongria women, through their elaborate cultural rituals, are leading this initiative. 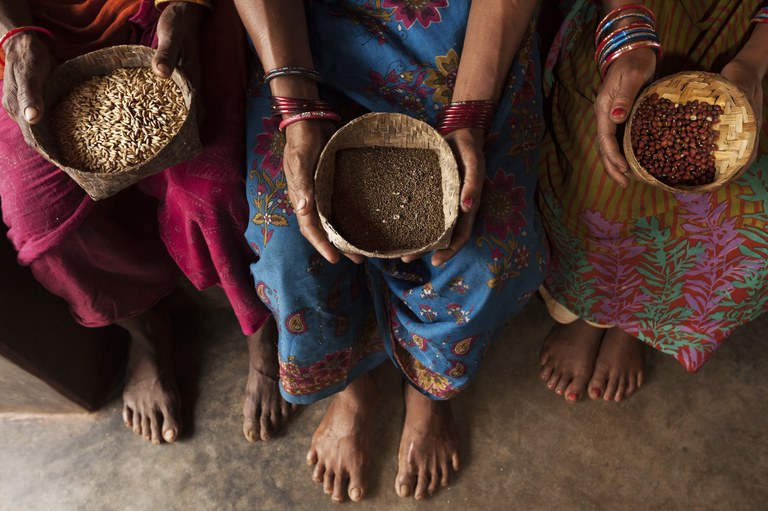 High up in the village of Hundijali, every household has a different way of safeguarding seeds. Some women grind neem leaves and mix them with seeds as an insecticide; others line their baskets with cow dung as a disinfectant. They save the seeds from the previous harvest, some to be grown next season, some for consumption and what remains for barter within the community. If a household falls short of seeds, the rest of the families pitch in. If there is a marriage or celebration, the entire village contributes. The seeds belong to no one and everyone.

The community doesn’t generally sell their seeds in the market unless there is a monetary or medical need. Instead, they sell indigenous crops that grow wild, such as jackfruit, bamboo shoots, oranges, honey, wildflowers and mangoes — gifts from Niyam Raja. 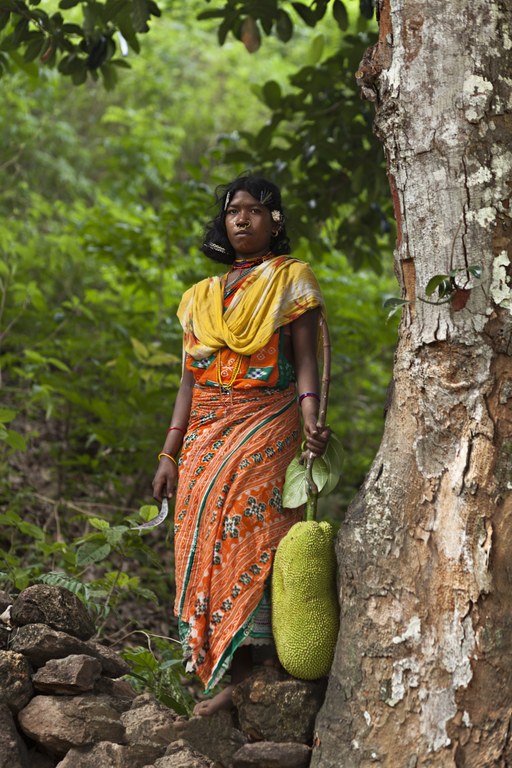 Seed collection, cultivation and farming festivals revolve around three key players in every village community: the farmer, the senior village priestess or bejuni, and the messenger or barik.

To bring back long-lost seeds, the bejuni sets out on elaborate expeditions into remote hilltops. Dressed traditionally with the signature three rings adorning her nose, she visits nearby villages where an heirloom crop has been found and preserved. Making an offering to a village’s bejuni of a pigeon, a hen or a goat, she brings back a fraction of the seeds to the farmers in her own community. After a successful harvest, the priestess returns double the amount of seeds she received to the neighboring village.

The barik, belonging to the Dom community — a low caste that lives harmoniously with the Dongria tribe — then travels door to door and village to village to spread the news of the rare seeds being saved. 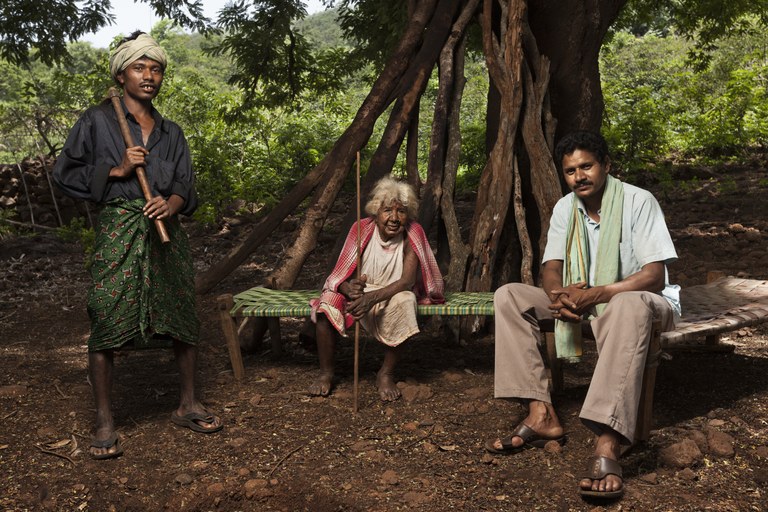 There are signs this seed-collection system is working. Remote hamlets of the Dongria Kondhs have reportedly rescued the hardy kodo millet, a variety high in fiber and energy content, after an absence of nearly 40 years.

The Bijun Parab seed festival takes place in various villages before the planting season begins. The women of the village clean the seeds, weave baskets for them, and then place them before the bejuni. The bejuni offers the seeds to Mother Earth, sacrificing a chicken, a pigeon or a goat. The blood trickles onto the seeds as she chants names of deities: the mountains, rivers and trees.

“We pray that they stay happy with us,” said Kumtadi Sikoka, the oldest bejuni in Hundijali. “Only then can we sprinkle the soil with our seeds.”

The Dongrias plant mostly on hill slopes, an entire community working together in lines on one piece of land. They sow close to 50 varieties of seeds intermixed on a single farm: millets, grains, pulses, beans, oilseeds, tubers and vegetables. They plant from late April until the end of August, depending on the weather. Apart from certain vegetables like spinach, which they get throughout the season, they harvest crop by crop, from October until the end of February.

The tribe’s practice of planting a wide variety of crops holds the key to a strengthened and climate-resilient food system. Although crops failed in large parts of Orissa in 2017 due to drought, pests, disease and untimely rainfall, Dongria Kondh farmers still brought home a decent harvest. While suicides were reported in other farming communities as a result of despair over crop losses, the Dongrias recorded no such deaths.

“We have never had a situation where all our crops have failed,” said 42-year-old Kalia Nonraka from Barmaguda village in the foothills of Niyamgiri. “Something or other will grow in less rainfall.” 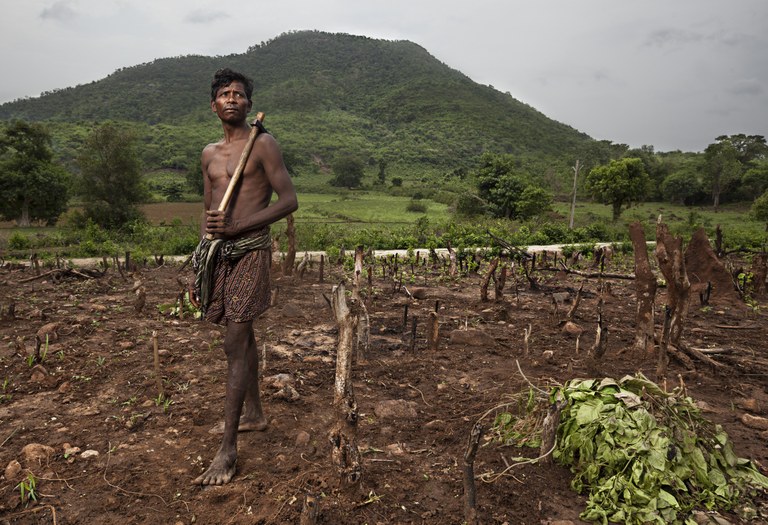 Kalia Nonraka from Barmaguda village in the foothills of Niyamgiri / Credit: Indrajeet Rajkhowa

Most of the seeds the Dongrias plant, such as finger millet, pearl millet and sorghum, tolerate drought and heat well.

“The farmers may not know of big words such as ‘climate change,’ but their symbiotic relationship with nature teaches them the science behind sustainable farming,” said Sarangi of Living Farms.

Growing various crops together allows the soil to retain most of its nutritive properties. What nutrients some crops absorb from the soil, others put back. Furthermore, the difference in height of the crops lets the rain and sun sieve through vegetation before reaching the surface, protecting the soil from harsh contact. Down the hill slopes, shrubby crops like peanut slow the speed of rainwater, protecting more vulnerable crops. 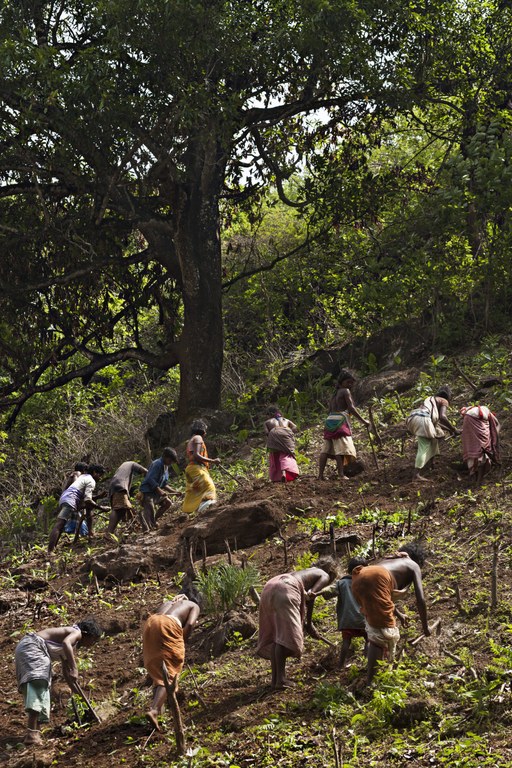 Farming mostly happens without any chemical additions to the soil. “They don’t want to hurt it,” Sarangi said.

The farmers are not too concerned about pests and insects. “If we eat, so will the birds, insects, flies and ants,” said 30-year-old farmer Drambu Jakesika. “The Earth does not belong just to us.”

The revival of indigenous food systems also secures the nutritional well-being of the Dongria Kondh. Even though the farmers swear by the benefits of traditional crops, certain communities in the foothills and lower ranges of Niyamgiri have taken to government-subsidized rice for portions of their meals. However, the remote hamlets nestled deeper into the mountains still maintain more millets in their diets. 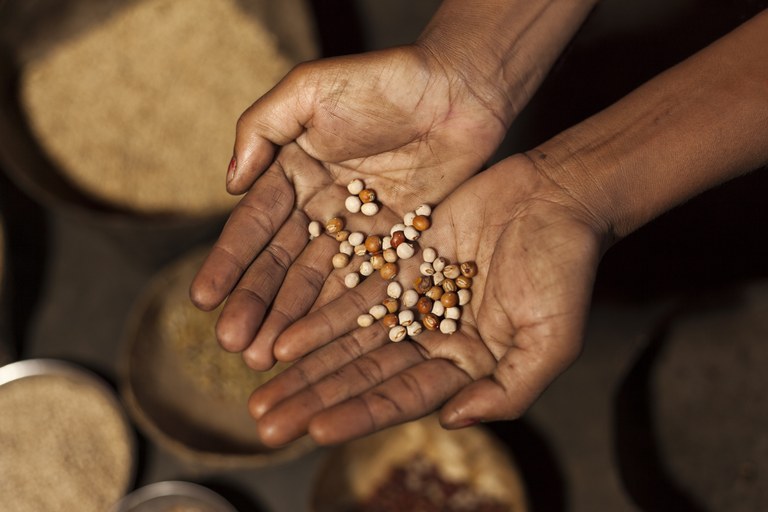 Lakshminarayan Pushty, a public health officer in the district of Rayagada, advocates old agricultural ways and eating habits for the remote tribe. “When they eat a mix of a variety of millets, vegetables and lentils, they get more fiber, protein, antioxidants and minerals such as magnesium and potassium, in comparison to only rice,” he said. “Just like their farms, good nutrition is all about how diverse their plate is.”

The Dongrias hope that renewing the culture of multiple crops will generate enough produce for every household. That would go a long way in alleviating health issues like malnutrition, anemia and maternal mortality that are prevalent among the tribe. Research shows that 60 percent of school-age children are malnourished, while 55 percent of adults show chronic energy deficiencies. 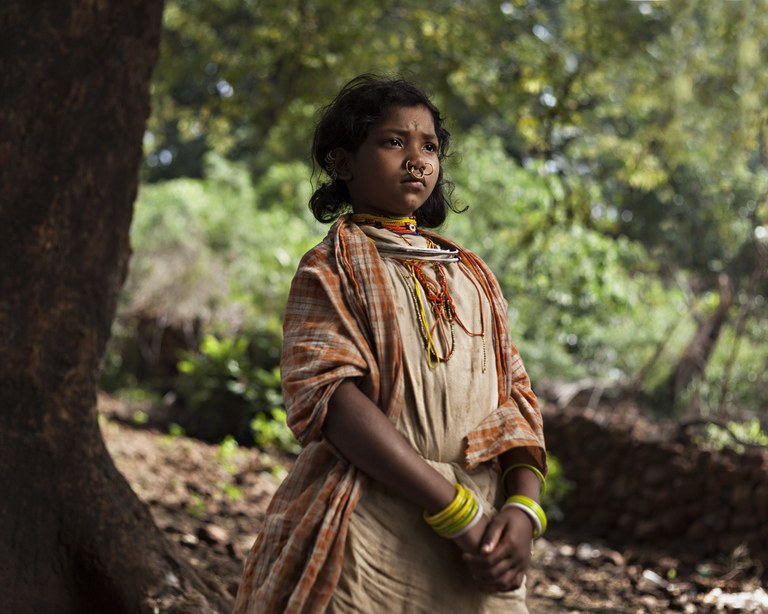 “Ten to 15 years back, our people used to eat food from the mountains — our millet, ragi,” said 31-year-old Dinja Jakesika, the sarpanchor head of the Kurli Gram Panchayat. (Gram Panchayats are self-governance blocks formed by a cluster of villages.) “Ever since they started eating rice made available by the government’s Public Distribution System, they have become very weak. Our men grow old faster.”

In Niyamgiri, the variety of nutritious heirloom seeds withered apace, not only with the introduction of rice but also when the government started a scheme to promote cash crops like pineapple, turmeric and ginger amongst the tribe in 1988, according to Susanta Kumar Dalai, a social worker in the Dongria Kondh communities. “If you talk to the different farmers, you will realize that a minimum of 50 percent of millet land is being used for cash-crop cultivation,” he said. “This is very dangerous as the Dongrias principally depend on their traditional crops for food security.”

Village head Jakesika wants to change the worrying land-use pattern in her sacred mountains. “I want to bring more land from the hills under traditional crops,” she said.

Waking up to the nutritional benefits and climate resiliency of the long-neglected millets, as well as to the needs of the indigenous small-scale farmers who cultivate these hardy crops,the Indian government has started promoting them under the National Food Security Act. Beneficiaries of the Public Distribution System, roughly 813 million citizens, would be able to get millets to eat at deeply subsidized prices of 1to 3 rupees (1 to 4 U.S. cents) per kilogram.

The Orissa state government has also taken up an ambitious five-year “millet mission” since 2016. The program aims to increase millet consumption in 60,000 households across several districts by boosting production and setting up processing machinery. By producing millets to meet a larger demand, the project also aims at improving the economic security of the Dongria Kondhs. 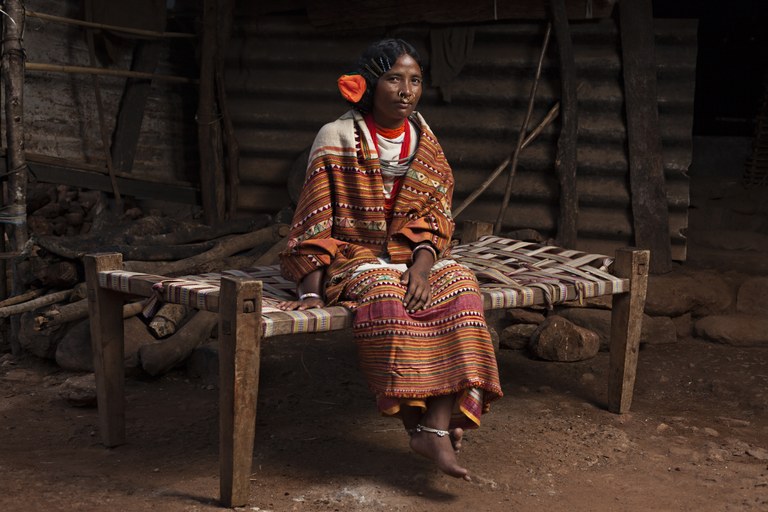 Village head Jakesika is keen to adopt the government’s initiative to boost cultivation of traditional millets, but is wary of disrupting old, indigenous practices. She emphasized that the soil’s health is paramount to the Dongria Kondhs.

“We cannot keep producing more and more at the cost of our soil, even if it is for a few varieties of millets,” she said. “The soil is us. We live in these hills as one entity, and that is most important.”

For her, sustainability solutions are not “one size fits all.”

“We will take all the help that we get, but only if it keeps our customs alive,” she said. “We will not blindly follow ways of modern agriculture for some misplaced notion of wealth and well-being.”

Sonali Prasad reports from climate frontlines across the world and is a former Pulitzer Traveling Fellow and an Earth Journalism Network Grantee. She can be found on Instagram and Twitter @sonaliprasad07.

Indrajeet Rajkhowa is a freelance photographer based in India, who specializes in environmental portraiture. He can be found on Instagram @indrarajkhowa.

Reporting for this story was supported by the Internews Earth Journalism Network.