India’s Southern State of Kerala Defeated Nipah Virus Thrice: How Can a Fourth Outbreak be Prevented?

India’s Southern State of Kerala Defeated Nipah Virus Thrice: How Can a Fourth Outbreak be Prevented?

The deadly Nipah virus struck Kerala thrice in the past four years. Each time, the state managed to fend off the attack in its early stages, preventing a full-blown outbreak. Even so, according to experts, the threat of another outbreak looms.

Lini Puthusserry remains a fragmented memory in the hearts of Ridhul and Sidharth — her two children who forever live with the sorrow of not being able to see their mother one last time before the funeral. Puthussery was a victim of the first Nipah outbreak that struck the southern Indian state of Kerala in 2018. At the time, Sidharth was a five.  Ridhul was just two.

For three months, Kerala was awestruck, unable to comprehend the cause and nature of the outbreak. When the health sector confirmed that Nipah, a deadly viral disease, had been detected in Perambra, a rural village in Kozhikode, fear and anxiety across Kerala amplified Mr. Sabith, from Sooppikkada Changorathu Panchayat, was the first Nipah patient. The term Nipah was still alien to Kerala when he presented at Perambra Taluk Hospital with a severe fever and vomiting. Soon after Sabith’s demise, his brother Swalih, his father Moosa Aliyar, and a distant relative, Mariyam, also succumbed to Nipah. Dread and terror swept through Kerala as the outbreak continued to spread.

Puthussery, who was a nurse at Perambra Taluk Hospital, became infected while treating Sabith. Even before understanding the disease, Lini lost her life. Her husband Sajeesh, a gulf returnee (from the United Arab Emirates) had only a single moment to see her for one last time. Within three months, 18 people across Kerala became infected with Nipah and almost 90% of those who were infected died. Panic in Kerala ceased only in August 2018, following the government’s official announcement that outbreak had been contained.

Sajeesh was in Dubai when his wife contracted Nipah and boarded the next available flight to Kerala after hearing about his wife’s condition. Though she remained conscious while her husband rushed home, her oxygen levels declined throughout the night. It was the news of Puthussery’s death that woke Sajeesh on 21 May 2018. It still frightens him when he recalls facing the unspeakable dilemma of deciding what to do with his wife’s body. The Department of Health and Social Welfare had not yet established protocol on infected bodies — there was an air of fear all around. Even ambulance drivers were too scared to take the bodies. The entire district was vacant, and not a single person left their home for days.

Soon after the government announced the protocol for Nipah-infected bodies, Sajeesh was faced with more gut-wrenching news:  his wife’s body could not be shifted to either Sajeesh’s house in Vadakara, nor her house in Chembanod. Puthussery’s body was to be immediately buried in the public cemetery, her children unable to see their mother’s face one last time. Seven days after Lini’s death, symptoms of fever appeared in her children, creating another period of dismay and social alienation for the family. Both the children were shifted to the isolation ward at Kozhikode Medical College at once. Fortunately, they both tested negative for Nipah. The mental trauma the family endured was unimaginable, as even close relatives, acting out of fear, avoided them. In addition, the family dealt with rampant rumors throughout their community. “It still hurts to think that people said the kids and I were affected with Nipah,” recalls Sajeesh. The compensation from the government was generous: although there was a promise to provide INR 5 Lakhs for relatives who lost their loved ones to Nipah, INR 10 Lakhs was deposited in Lini’s kids’ accounts and Sajeesh was also able to get a government job.

Soon after the outbreak was reported, the government launched intensive contact-tracing through its newly set-up Nipah cell to coordinate the situation and prepare contact history lists of patients. “I received above 50 calls a day from the Health Department enquiring about my travel history and contacts,” remembers Sajeesh. “I told them whatever I remembered. Lini had 16 primary contacts. The Nipah cell created a primary contact list for these 16 people and every single one was under observation for the 21 day incubation period”, says Sajeesh. “Local people were frightened, yet helpful at the same time. Neighbors cooked food for us, and volunteers delivered essential items. The then-Health Minister, K Shailaja, called frequently to check on our wellbeing, Sajeesh added.

Bats, the most likely culprit

Scientists have concluded that the most likely culprit of the 2018 Nipah outbreak in were bats. The of the Nipah virus was found in pteropus species, a species of fruit bat or flying foxes. The virus lives in the body of the bat which makes the mammal a ‘natural reservoir’ for the pathogen. Nipah can bespread to people who come in close contact with a bat or its body fluids such as saliva, urine or feces. Once transmitted, the ‘zoonotic’ virus -which means it originated in another mammal — becomes deadly. Unlike bats, human bodies cannot co-exist with the virus naturally. The zoonotic origin of Nipah in Kerala was  highlighted in a study published by National Institute of Virology in 2019. The samples collected from 2018 patients and perambra bats had a compatibility of ‪99.7-100%. Test results from the samples collected from Kodiyathoor and Thamarasseri of Chathamangalam Panchayat in 2021 also point to the involvement of bats in the Nipah outbreak. The antibody named IGG was found in the samples collected from a pterpous bat from Thamarasserry and Rositus bat from Kodiyathur. The Kerala government intends to conduct further studies based on these findings. 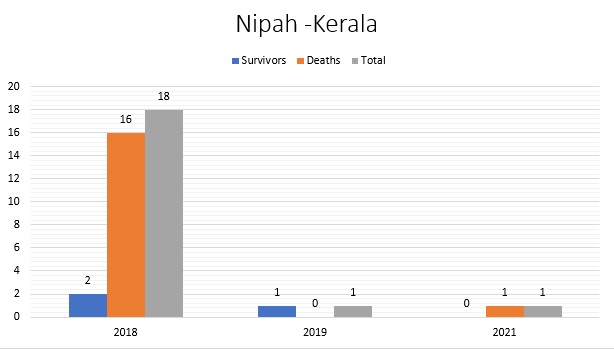 Nipah’s most common symptoms, such as fever, vomiting, headache, dizziness, and loss of consciousness can present themselves anytime during the 4 to 21 day-long incubation period. Rarely, symptoms like cough, stomachache, nausea, blurred vision can appear. Patients can fall into a coma a mere two days after showing symptoms, Nipah can affect the lungs or cause Encephalitis, a condition that affects the brain. The virus also spreads to anyone who comes in close contact of an infected person, giving Nipah ‘pandemic potential’,or a pathogen that can spread fast and cause mass infection. Experts advise that once someone has tested positive, the infected should be shifted to an isolation ward. The number of health workers in the wards should be limited, and the levels of oxygen in the patient’s body should be monitored frequently and accurately.

The primary factor that led the government’s efforts to find a vaccine or medication for Nipah was the fear of further spread and death.

Then they learned that a monoclonal antibody mixture that can be used a shield against Nipah was available in Australia. With the central government’s permission, the medicine was imported. But unfortunately, 16 people had already died before its arrival. The condition of other Nipah patients improved with the use of Ribavirin, a medicine developed by Dr Christopher C Broader, which can only be considered as an antibody.

Tracking the source is all-important

Changorathu Sooppikkada which is about 45 km north of Kozhikoze, is a dense forest area and a natural bat habitat. This is assumed to be the source of first Nipah outbreak. although it has not been proven officially. According to Beeran Kutty, who travelled with Sabith on bike a few days before the Nipah outbreak was detected, a bat fell onto Sabith’s bike during the travel. Sabith, unaware that the bat may have been carrying Nipah pathogens, placed it on the side of the road with his bare hands. However, Beeran Kutty himself tested negative. There is also no official explanation for the infection of first patient in all the three outbreaks. As a result, Determining the source of the outbreak remains a critical task for scientists and health workers.

One Health Approach: a solution

According to Dr Prejith, Officer in charge of the Centre for One Health Education Advocacy Research (COHEART) in Wayanad, the ultimate solution for zoonotic diseases is to employ the One Health approach, which is a multidisciplinary vision that ensures comprehensive health and wellness through amalgamating environmental, veterinary, and human health. "Nothing can be done after a disease outbreak,” he says. “Samples should be tested for antibodies in regular intervals. The only way to understand these outbreaks is through an in-depth epidemiologic, environmental, virologic, and genomic research.”

COHEART works closely with both the Department of Health and Social Welfare and the Forest Department, who have already initiated further research into the Nipah virus. The institute is also planning to expand its scope of research by employing advanced lab facilities for further research. “If a virus is confirmed in a region, its presence can never be erased completely,” says Dr Prejith. “It will be present in the animals and birds of that ecosystem. So, it is a tough task to control a viral disease. Activities like deforestation, which destroy the natural ecosystem, can be factors to stimulate them to excrete the virus, since the environment, weather fluctuations, vector population and animal health are inextricably linked, Dr Pajith explains. “The significance of One Health approach is growing.”

Contained but not eliminated

Nipah has continued to resurface in Kerala. In 2019, an engineering student from Kochi got infected but a further spread was quickly contained. However, this year while Kerala was still combating the Covid-19 pandemic, Nipah surfaced again in Kozhikode, which created an additional huge challenge for the government. Twelve-year-old Muhammad Hashim, a native of Chathamangalam panchayat, died after testing positive for Nipah on September 5. Almost 200 primary and secondary contacts of Hashim were identified and placed under isolation. Much to the relief of locals, none of these contacts tested positive. According to the state’s Health Minister Veena George, the state has prepared a comprehensive plan to establish permanent isolation wards in every single hospital from community health centers to district level hospitals in the light of frequent virus outbreaks Currently, all the medical college hospitals in the state are equipped with this facility. The Health Department, which aims to provide fast and efficient treatment, has prepared an action plan to tackle the next Nipah outbreak. “It will be in force as early as possible,” the Minister says.

This story was produced with the support of Internews’ Earth Journalism Network. It was originally published in Deshabimani on 25 November 2021 and has been lightly edited for length and clarity.