Chinese-owned mining operations in the Midlands Province of Zimbabwe continue to defy environmental regulations and violate the rights of local communities.

Communities in the mineral-rich Great Dyke which forms part of the Midlands Province in Zimbabwe have expressed concern about increasing environmental and infrastructure degradation in the region, leaving trails of open pits which are now death traps for human and livestock.

While mining has been identified as a key sector for the attainment of National Development Strategy 1 (NDS1) goals, the impact of some mining operations in the Midlands Province has become a cause for concern.

The Zimbabwean government recently availed Statutory Instrument 104 of 2021 Environmental Management (Control of Alluvial Mining) (Amendment) Regulations, 2021 (No. 2) which regulates the mining operations in the country.

Yet, a Chinese mining company continues to defy the government ban on alluvial gold mining, despite efforts by the Environmental Management Agency (EMA) to stop operations in line with a national government directive. A recent visit to Mberengwa proved its sorry state.

White ASB Gold Mine, operating along the Dohwe river near Mberengwa Rural Service Center, is licensed to undertake rubble, open-cast and reef mining. It has now encroached into the Dohwe River catchment with the use of heavy equipment such as excavators, front-end loaders and tipper trucks, resulting in massive environmental destruction.

Communities living in the downstream area along Dohwe river expressed concern about their health and safety considering the use of mercury in the mining activities.

“Chinese mining has destabilized our way of life because we have been very dependent on the river for our livelihoods but due to water pollution we now fear for our lives and that of our livestock,” said Tabitha Zhou, who lives nearby.

“When the miners came in last year, we were informed that they were going to build a dam for us and we would benefit from it through vegetable gardens but until now the dream has not yet been realized,” she said.

Theresa Mgume of Mhondongori village under chief Mapanzure in Zvishavane said she was forced to relocate from Mberengwa after she lost her son last year, who drowned in one of the open pits left by transnational miners in Neta, Mberengwa.

“I was haunted by the state of disused mine shafts which have become death traps for humans and livestock. I had to relocate to Zvishavane but still the memory of my son lingers in my mind,” she said. the visibly shaken mother chronicled her son’s ordeal with total sadness and despair.

Mberengwa Rural District Council’s head of environment, Robson Bhulabhula, admitted the council is crippled when it comes to controlling the mining operations in their jurisdiction, because when the companies arrive at the site, all their paperwork would have been completed in Harare.

“Territorial control rests with us but it’s very difficult for us to charge mining levies on transnational companies whose papers have not at all passed through our offices. Everything is done in the capital,” Bhulabhula explained.

Chinese operations in the country have a track record of non-compliance with environmental regulations. Benson Bhasera, Midlands Provincial Environment Manager, said several efforts to stop the Chinese miner from committing environmental crimes over the past two months have not been fruitful.

“An order was served on July 1 by our district official to stop operations and rehabilitate the area but the Chinese manager refused to sign citing that she needed to consult the interpreter before signing. The order was then accepted two days later but operations continued,” he said. “An inspection conducted on July 8 assessed the extend of riverbed and riverbank excavation and an order to cease operations was served. A ticket worth $RTGS 800 000 was charged as well. Despite these efforts, the miner continues to operate. We have since engaged critical stakeholders such as the ministry on mines as we seek to take the route of opening a docket.”

Bhasera said the miner is willfully disregarding the law as stipulated in sections 6, 7 and 8 of the Statutory Instrument:

Tsitsi Matumba, a member of the Zvishavane Small-scale Miners association, said communities are now pinning their hopes on the current amendment of the mining laws so that they may fully benefit from their own mineral resources.

“Our districts, judging from the abundance of mineral deposits, should have been developed by now but nothing is coming to the communities except death and deprivation. The state of our road infrastructure and other social amenities do not reflect our God-given wealth,” she said.

Chief Mapanzure said he has engaged the local authority, Runde Rural District Council, to follow up with all the miners who have left open pits.

“So far, as traditional leaders we have engaged with both the ministry and rural authorities to visit the database of all miners who caused environmental degradation and left unceremoniously so that they are made to rehabilitate the land or face their crimes in court,” he said.

Senator Chief Ngungumbane of Mberengwa echoed these sentiments, adding that some sacred Indigenous shrines have been tampered with – a development that compromises the community’s traditional values.

“It’s unfortunate that some Chinese mineral exploitations have engulfed our sacred shrines. Communal sanity can not prevail when our sacred places are being tainted. We are hoping the amendment of the mining regulations will incorporate traditional leaders as key decision makers regarding exploration.”

A 2020 report on Extractive Sector and Sustainable Economic Development, by the Zimbabwe Environmental Law Association ZELA identified three important aspects highlighting the effects of mining in Shurugwi, another town in Midlands Province, including: failure by mining companies to implement their corporate social responsibilities; environmental degradation; and the distress and human rights violations caused to communities.

The research revealed that large companies exploiting mineral resources in Shurugwi are making minimal efforts to plough benefits back into communities. This is largely attributed to the lack of a legal framework that obligates mining companies to practice corporate social responsibility in Zimbabwe.

“The trend in Shurugwi is that disused open shafts and pits are left unrehabilitated. This is largely ascribed to a lack of constant monitoring by the Environmental Management Agency due to limited resources. As a result, there is unabated loss of life (human and livestock), land degradation, air pollution, siltation and poisoning of rivers and streams,” the report noted.

This violates principles laid out by the International Council on Mining and Metals instructing mining companies to “uphold fundamental human rights and respect cultures, customs and values in dealings with employees and others who are affected by our activities.”

As the report noted, “Violations of human rights include labor rights, environmental, economic, social and cultural rights. The socializing of costs is evident through forced evictions and relocations of communities from their traditional homelands without prior informed consent to pave way for mining activities. This has led to communities suffering from loss of agricultural and grazing land thereby affecting their food security and sources of income.”

Zimbabwe is in the process of reviewing mining laws and policies to ensure communities benefit from their resources and to improve transparency in the sector.

Edward Mukaratigwa, Chairperson of the Portfolio Committee on Mines and Minerals Development, said there was consensus on the need to review the mining laws in Zimbabwe, particularly the principal Act — the Mines and Minerals Act.

Mukaratigwa said communities have called for disclosure of mining agreements, asking that they be written in local languages as well as in Braille to empower the local community to hold investors accountable for their actions.

This story was produced with the support of Internews' Earth Journalism Network and was originally published by Sly Media News on 31 July 2021. It has been lightly edited for length and clarity.

Banner image: Open cast section of the Ngeysi mine in Zimbabwe / Credit: Martin Addison on Flickr. 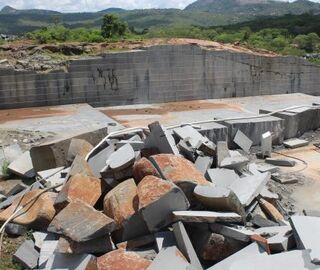