Communities in rural Karen State don’t refer to climate change by name, but they have experienced its negative impacts and are responding.

At the foot of Maw Law Ei Mountain, the highest peak in eastern Myanmar’s Karen State, increasing temperatures, drought and extreme weather events, such as flash-flooding, have become common.

Members of the indigenous groups that make up the majority of the population here, talk about the significant changes they’ve seen in both the natural environment and the climate.

“In the past, it was cooler because we had many big trees,” said Kyaw Blar, a villager from Ta Deh Koh village, one of the villages at the foot of Maw Law Ei mountain (pronounced Mulayit). “It’s all plain area now… it is hotter now.”

Myanmar, also known as Burma, is among the countries most vulnerable to extreme weather events related to climate change. In 2019 Germanwatch, ranked Burma 3rd in its Global Climate Risk Index on the long-term climate change risk table, which analyses quantified impacts of extreme weather events both in terms of fatalities as well as economic losses that occurred in the 20-year period; from 1998-2017.

Yet not many people in rural Karen State are aware of climate change’s direct causes or even use the term to refer to the changes they’re seeing. They are, however, among a growing number of vulnerable people forced to cope with the impacts of extreme weather events exacerbated by climate change.

Maw Law Ei mountain is part of the Dawna Range that runs north to south in Myanmar for around 350 kilometers, or 220 miles. Communities living in the eastern and western parts of the range say over the past decade they’ve noticed changes to the natural resources they depend on.

“In the past, the stream in our village was small, but the water was deep. It was very good for bathing in the stream,” said Mu Lar Baung, a resident of Kli village near the foot of Maw Law Ei. “Now, there is less water and the water is not clean like before. There is no water [in summer], it’s all dried up.”

They have different ways of explaining the causes.

“Maybe we see this changing weather because the trees and bamboo were cut down,” said Saw Htoo Gaw, a farmer from Kli village. He says there is insufficient water to grow his crops and dozens of plots of land have been abandoned because the river they relied on to divert water into their irrigation canal has less water. He blames this, too, on tree loss.

“The expansion for land cultivation, where someone takes more land to use for mono-crops, is causing deforestation that contributes to climate change,” said Saw Ma Bu, the land and natural resources management coordinator for KESAN. “There are also other activities such as road construction, unregulated mining and natural resource extraction that are causing deforestation.”

The KESAN research also highlights the negative environmental impact of mono-crop plantations, which, it found, has caused 33 streams to run dry in the eastern Dawna Range over less than 10 years.

Saw Ma Bu said that most common mono-crops in the region are corn and rubber plantations. Mono-crop agricultural is when a single crop is grown in large areas of land and Saw Ma Bu said the amount of land uses keep expanding both in the Western and Eastern Downa Range.

“Massive lands are given and when people clear the land, they don’t care if there are water sources or not,” he said, referring to investors in the mono-crop business.

The flooding left debris and sediment in waterways, blocking their flow and restricting the amount of water available to nearby villages. Some parts of the main rivers in the area had their waterways changed permanently due to the flooding.

Mu Lar Baung from Kli village is still traumatized by the disaster.

“It was at the middle of the night when the flash-flood occurred,” she said. “We heard loud noise together with thunder sound. The noise was louder than the sound of two planes landing. I grabbed all my children and ran. I had a small store at home and when the flood took place, I couldn’t take any of it. Everything, including my money box [was] washed away by the water. It was very frightening, and I don’t want to experience it again. If I would, I might die. I barely survived the last time.”

The flash flood also hit area farmers hard. Saw Htoo Gaw said he had to abandon his farm and can now only work on some parts of it due to the lack of water.

“It has been 13 years, I have only been reworking my farm since two years ago,” Saw Htoo Gaw said. “I am thinking to leave some parts of my farm for pasture for animals because we don’t have enough water anymore.”

Kyaw Blar recalled a time when the stream near his home had water that rose past his knees. “Now, it is no way up to the knee,” he said. “This was also because the flash-flood brought in debris and sand. The water dried up.”

Seeing the impacts on the environment and weather, communities from both the east and west of Maw Law Ei mountain started taking action to preserve their forests. In 2017, representatives from more than 50 villages got together and founded the Maw Law Ei Mountain Preservation Committee to lead conservation efforts.

Many individual committee members are religious leaders, since their support for preservation also covers the maintenance of Maw Law Ei Pagoda that sits on the highest spot of the mountain.

Sayardaw [Abbot] U Gawsita, Chairperson of the Maw Law Ei Mountain Preservation Committee, said that if action on conservation is not taken, there will be more problems in the future.

“If we don’t start taking action, we will soon lose all our natural forest, and by then, it will be a huge problem for our Karen people,” he said.

The Maw Law Ei Mountain Preservation Committee has been organizing start-up meetings twice a year since 2018 with communities from both Eastern and Western parts of the mountain range and representatives of local organizations, to take further steps together in preserving their environment.

In the committee meeting on 27 May, decisions were made to move ahead with getting the mountain and surrounding areas recognized by authorities as a wildlife sanctuary and starting environmental preservation efforts by preventing forest fires.

But community-led initiatives in environmental preservation are challenging, especially in Karen State as many areas are under the mixed control of non-state armed ethnic organizations and the government. The two sides fought against each other in one of the world’s longest civil wars until 2011, when they signed a ceasefire agreement. Still, the authorities have different sets of policies, some of which contradict one another.

“When we do this work, we see there are still many weak points in our committee,” said Sayardaw U Gawsita. “We have limited knowledge and we can’t implement some of the work that we have decided to do. In addition, when we work on environmental preservation, we also need to collaborate with ethnic armed groups and the government’s forestry department, [where] we have yet to establish a connection. This is another weak point of the committee.”

Burma’s 2008 constitution reserves all the rights and management of land for the State, while ethnic armed groups often tend to recognize customary land ownership and management.

“The best way for the community to preserve their environment is to do it through cooperation with our forestry department officials so it will be more binding,” said Padoh Mahn Ba Tun, head of the forestry department of the Karen National Union (KNU), one of the armed groups that controls Maw Law Ei. “We can find ways to get technical and other support for them. Maw Law Ei or Mulayit Mountain is unique. Since the time of British rule, it was demarcated as a wildlife sanctuary and until now, it hasn’t been officially released.”

Padoh Mahn Ba Tun is aware of the Maw Law Ei Mountain Preservation Committee efforts and he said that there are ways they’re working toward their goal.

“The communities want it to be kept as a wildlife sanctuary. Wildlife sanctuary needs to have features like large enough forestland or must be the habitat of endangered species. However, there are ways the area can be demarcated as a specially preserved forestland.”

Currently, villagers have no experience using government mechanisms related to local environmental preservation policies. The Maw Law Ei Mountain Preservation Committee said they are still unsure where to start in accessing government departments to gain support from the central administration.

In the northern Karen State of Mutraw (Papun) district, with the collaboration of local community groups, including KESAN and the KNU forestry department, an environmental preservation initiative called “The Salween Peace Park” was launched in December 2018.

Paul Sein Twa, Executive Director of KESAN, also serves as the Chair of the Karen Wildlife Conservation Initiative and played a significant role in providing technical support for the establishment of the Salween Peace Park.

“The Salween Peace Park is a means of struggle for communities in Mutraw District to be able to partake [in] a genuine peace, self-determination, sufficient livelihood and rights to manage their own land, natural resources and their wildlife,” he said.

“At the same time, it is also to help maintain and develop their culture and traditions in the future. These are the purposes of the Peace Park for the short-term. In the long-term, it is for our future generation to benefit from this initiative for their sustainability.”

The Burma government recently announced its National Environmental Policy and Climate Change Policy, at an event marking World Environment Day on June 5. While the Climate Change policy recognizes the increasing threat of extreme weather and other climate change impacts to the country’s economic and social development, its target remains limited to more urban areas in order to create a climate-resilient and low-carbon society.

According to the Myanmar Climate Change Alliance (MCCA), a program to mainstream climate change into the policy development and reform agenda in Burma, the latest available data back in 2000 showed that Burma absorbs through its forests more CO2 than it emits.
However, there have been huge changes in land uses within the past 20 years. Managing the forest is now vital as deforestation is widespread causing extreme weather conditions.

Padoh Mahn Ba Tun pointed out that the negative impacts of extreme weather and human activity are widespread all over the country.

“We could see it everywhere. We can say nearly throughout Burma where deforestation resulted in drought, unfertile soil, increasing insects that are destroying crops and causing low harvest. Then, during raining season, we experience flooding, flash-flooding and during dry season, we experience drought,” he said.

On the ground, community preservation work may be slow as there are many challenges, but the communities are determined to protect the environment for their future generations.

This story was produced with the support of the Earth Journalism Network's Asia-Pacific project. It first appeared on Karen News. A shorter version in Karen with Burmese subtitles aired on the Democratic Voice of Burma (DVB), a national TV channel, and is posted on the Karen Information Center/ Karen News YouTube channel here. 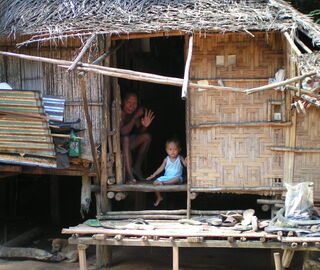 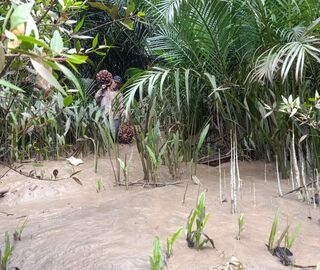 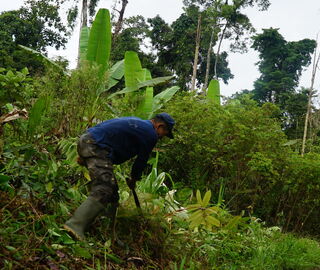 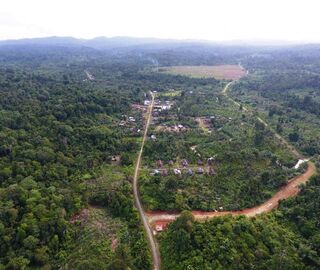