“We want to raise our voices and empower the indigenous peoples. IPs are arguably among the most disadvantaged and vulnerable groups of people in the world” - Victoria Tauli-Corpuz, U.N.

Every year, August 9 is commemorated as the International Day of the World’s Indigenous Peoples (IPs). Around the world, many indigenous peoples face development challenges as their culture, livelihoods and environment come under increasing threat.

According to the United Nations, an estimated 370 million indigenous peoples live in 90 countries across the world, representing a rich diversity of cultures, languages and religions. They make up less than 5 percent of the world’s population but account for 15 percent of the poorest.

“We want to raise our voices and empower the indigenous peoples. IPs are arguably among the most disadvantaged and vulnerable groups of people in the world,” said Victoria Tauli-Corpuz, United Nations Special Rapporteur on the rights of indigenous peoples.

Tauli-Corpuz told the Internews’ Earth Journalism Network that IPs fundamental rights to self-determination, lands, resources and knowledge need to be protected to ensure a more sustainable, diverse and equal world. 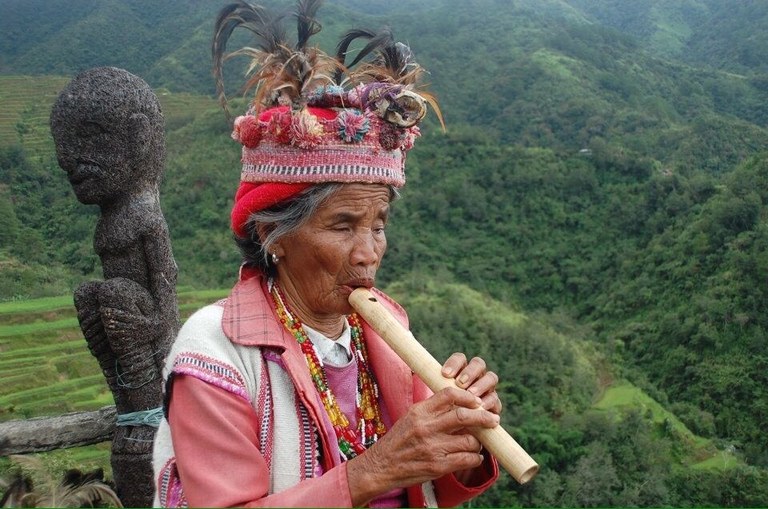 The Ifugao, an indigenous tribe from Northern Philippines, are particularly vulnerable to the impacts of climate change / Credit: Imelda Abano

The theme for this year’s International Day of the World’s Indigenous Peoples is “Indigenous Peoples’ Migration and Movement.” The United Nations stressed that as a result of the loss of their lands, territories and resources due to development and other pressures, many indigenous peoples migrate to urban areas in search of better prospects of life, education and employment. They also migrate between countries to escape conflict, persecution and climate change impacts. Despite the widespread assumption that indigenous peoples live overwhelmingly in rural territories, urban areas are now home to a significant proportion of indigenous populations.

Tauli-Corpuz said that IPs are amongst those who suffer from the most adverse impacts of climate change because most of them live in the most fragile ecosystems, such as the Arctic, the low-lying islands, high mountains and tropical and boreal forests, among others. However, they have also shown that they are the ones who managed to adapt to some of these impacts in a much better fashion because of their traditional knowledge and strong communities.

For years, indigenous peoples have been marginalized and suffer from human rights violations, conflicts and displacements due to deforestation, expansion of oil plantations, nuclear waste sites, renewable energy projects. These initiatives are often without free, prior and informed consent.

In June 2018, Tauli-Corpuz published the report, Cornered by Protected Areas, with the Rights and Resources Initiative (RRI) discussing that up to 2.5 billion people worldwide depend on community-led lands and resources for their livelihoods and culture. It argues in order to save forest and curb biodiversity loss, indigenous peoples’ claims to territorial rights must be recognized.

Tauli-Corpuz, on the other hand, said that indigenous peoples too are contributing in their communities on adapting to the changing climate. She cited the planting of mangroves along the coast in many low-lying islands, floating vegetable gardens, indigenous knowledge in planting crops, building sturdy houses, among others.

“Since indigenous peoples are contributing significantly to climate change mitigation by living simply, further developing and practicing their traditional knowledge systems and by conserving and sustainably using their forests, agricultural lands, coastal resources, among others, their rights to continue doing these mitigation measures should be respected and protected,” Tauli-Corpuz said, adding that many of the world’s last remaining forests and mangroves and 80% of the world’s biodiversity are found in their territories.

Unfortunately, she said, the priorities of most governments and the private sector lie in extracting natural resources, e.g. oil, gas, minerals, metals, timber, many of which are found in indigenous territories, and expanding agricultural monoculture plantations.

“IPs are faced with serious threats in terms of adapting to climate change and conserving biological diversity. Their territories are beset with environmental pollution and destruction and they are either displaced from their territories, criminalized or subjected to extra-judicial killings when they assert their rights to manage and control these ecosystems,” she lamented, adding that the protection and fulfilment of their rights contained in the UN Declaration on the Rights of Indigenous Peoples and other international human rights laws are “highly compromised.”

Unless, governments and the private sector genuinely respect, protect and fulfill indigenous peoples collective and individual rights, their contributions in mitigating climate change will be undermined significantly, Tauli-Corpuz said.

“Outmigration from their communities because of forced displacements and the adverse climate change impacts will multiply many times over. When migration remains their only choice the governments have to ensure that their rights to their cultures and identities and to gainful employment should be upheld wherever they find themselves in,” she explained.