Indigenous People’s Customs Could Be Threatened by Cattle Ranching in Aru, Indonesia

Indigenous People’s Customs Could Be Threatened by Cattle Ranching in Aru, Indonesia

The Aru Islands are rich in cultural and biodiversity. Many Aru Indigenous people are worried their traditions, Aru's flora and fauna and the relationship between the two could be threatened by the onset of large-scale cattle ranching.

This story is the fourth installment of Mongabay Indonesia's series on cattle ranching in Aru. The third story can be found here.

Silas Apalem, along with head of other clans, were invited by Aru Islands District Chief Johan Gonga to come to his office on July 12, 2019 to listen to a briefing on a cattle ranching investment in South Aru sub-district, in the Moluccas.

“It was explained there, about the follow up regarding the process of land acquisition,” said Silas, who heads the Apalem clan of Popojetur village.

Speaking to Mongabay Indonesia in June 2022, Silas said that someone who presented himself as “Haji Bambang,” gave a briefing on plans for four companies to invest in cattle ranching in South Aru.

In the briefing, Bambang promised to grant scholarships to local children and housing for villagers who accepted the cattle businesses in their area, Silas said.

The customary societies in Popjetur, Marfenfen and in other villages in the South Aru sub-district all practice their own form of tordauk, a hunting ritual that begins with the burning of tall grasses on the island’s savanna.

This ritual is usually held in October, a month that is believed to be when wild animals such as deer and wild boars are most abundant.

“The burning of the tall grass will force the wild animals to come out and people will shoot them with arrows and the yields are shared equally between them,” Silas noted.

According to him, the Indigenous groups here have a “multidimensional” relationship with the land and customary territory. For them, land is not only an economic source but an inseparable part of everyday life.

Ignoring these relationships, including encouraging cattle ranching on customary lands, will result in damage to local livelihoods, he pointed out.

Mama Ribka Siarukin said her ancestors were the ones who motivated her to fight to reject the cattle farming companies in Popjetur.

“Why be afraid? We have a life here. If we die, bury me here, in front of my house,” Ribka said.

She said that she rejected the presence of the cattle ranching because she did not want to suffer like her predecessors who had to fight to defend their land against Dutch colonialism all those many years ago.

Mia Siscawati, an anthropologist who also heads the Gender Study Program of the University of Indonesia, said that traditional people’s loss of access to natural resources due to interests like cattle ranching or plantations can have serious repercussions.

It can sever their links to their living space and, therefore, their identity.

Living space, for customary societies, includes not only the land but also entire ecosystems – including forests, fields, freshwater sources, the coasts, the ocean– with functions that are economic, ecological, social, cultural and political.

Mia took the specific example of impacts on women in these Indigenous groups who usually possess knowledge on food and medicine. Such knowledge, she said, was not only useful for the conservation of nature, but also as a bargaining tool in the community.

Women are the ones who know how to identify, use, regenerate and maintain plants with medicinal, food or spiritual and symbolic value.

If the forests or their land are converted for other functions such as cattle ranching, the ecosystem that has so far supported them could disappear

“Losing access and control of natural resources is not an insignificant impact. From the socio-cultural aspect, there is knowledge that is erased when they no longer have access,” Mia said.

An abbreviated version of this story was produced with the support of the Earth Journalism Network and was originally published by Mongabay Indonesia on October 13, 2022. It has been edited for length and clarity. 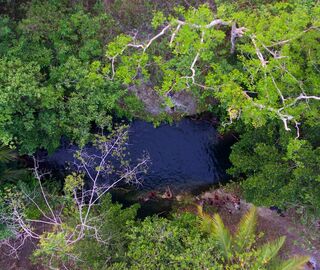