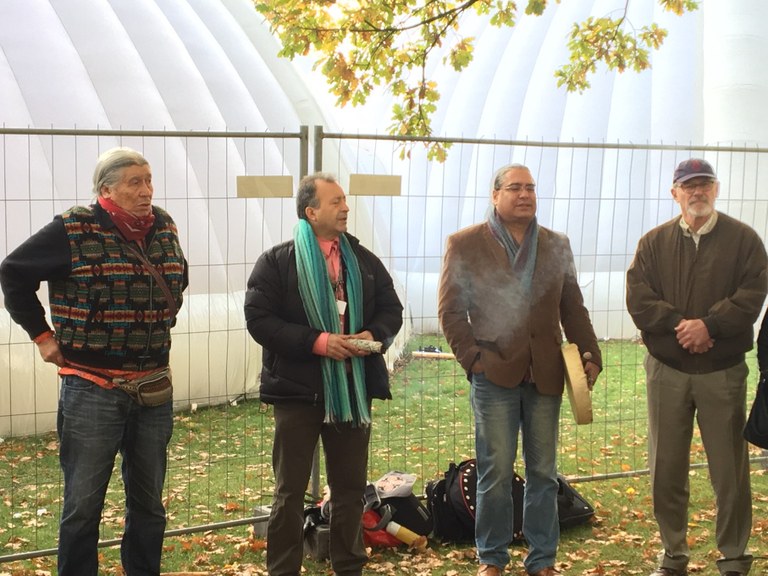 BONN: SOLOMON Islands had played a key role in ensuring the Indigenous Peoples’ (IP) Platform at the United Nations Framework Convention on Climate Change (UNFCCC) was adopted at the 23rd Conference of Parties (COP23) here in Bonn, Germany.

Dr. Samson Viulu from The Network for Indigenous Peoples of Solomons (NIPS) and represented Solomon Islands Government at the negotiations was instrumental in pushing for the IP to be adopted.

“The IP Platform has formally been adopted during the high plenary session of the Subsidiary Body for Implementation (SBI) on Wednesday,” he told Island Sun in Bonn.

This means the IP Platform has been officially adopted as one of COP23’s decision and what it entails is the adoption by parties for its full operations.

‘This clearly demonstrated that parties have now recognized the importance of engaging IPs in the decision-making processes at the international stage and hopefully parties will streamline this into their respective national legislation.

Dr. Samson who currently works as a research fellow at the University of the South Pacific in Suva, Fiji Islands said the adoption of the IP platform is very important as it will not only recognize the rights of IPs but it will also strengthen and protect their traditional knowledge systems.

Dr Samson said this milestone took many years and struggles to achieve, considering that, the IP communities throughout the globe have used their traditional knowledge and practices for centuries to navigate through disasters and calamities.

“Therefore it is only fitting that parties to the UNFCCC COP should finally recognize their importance as equal partners.

“The platform will complement the modern science as a vehicle of solutions to combating climate change.”

He said the Solomon Islands government played a key role in getting the IP Platform recognized within the UNFCCC processes and the International Indigenous Peoples Forum on Climate Change (IIPFCC) fully appreciate this assistance.

Dr. Samson said in terms of the climate change negotiations to operationalize the Paris Agreement, not much has been made in most of the thematic areas such as loss and damage, mitigation and adaptation, finance, technology, NDCs, global stock take, reporting and compliance and so forth in this COP23 negotiations.

“Most of these negotiations will now shift to COP24, which will be in Poland next year.

“However, the full operationalization of the Indigenous Peoples (IP) Platform is one of the only few agendas that has made a huge progress at this COP23 and will go down as Fiji's biggest legacy in hosting this COP23.”

Dr. Samson explained that parties, states and all the concerned non-government constituents in the UNFCCC processes managed to reach an agreement on the draft text around 8pm on Tuesday night, and was formally adopted by the high plenary of the UNFCCC bodies the next day on Wednesday 15th November; and is now a decision of the COP23.

“This was possible after hard fought negotiations against some reluctant states by friendly states led by Ecuador, Bolivia and the Solomon Islands to name a few.”

The decision to fully operationalize the IP platform in this COP23 was a follow up from the Paris Agreement where the establishment of the IP platform was adopted. With its adoption for full operationalization, the IP communities throughout the globe will now remember Fiji as the COP Presidency that helped ushered in a new dawn of hope to preserve, protect and strengthen their traditional systems.

The adoption by parties for its full operationalization clearly demonstrated that parties have now recognized the importance of engaging IPs in the decision-making processes at the international stage and Dr Samson is hopeful parties will streamline this into their respective national legislation.