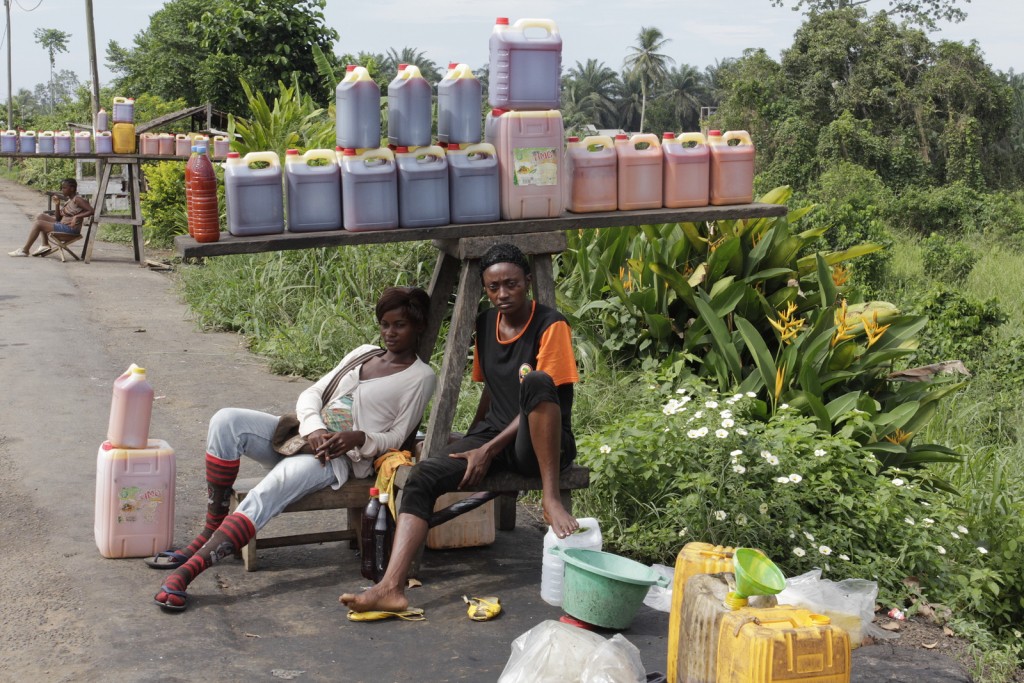 The merchants are set up right after a toll slows down traffic between Douala and Yaounde. These containers of palm oil are from small holder producers. Photo by Flore de Preneuf/PROFOR.

Large-scale palm oil investment in the Congo Basin has taken a new dimension in recent years. For many, the region has become the new palm oil frontier of the world.

Overall, about 1.1 million hectares of land deals have been signed in the region since the early part of the last decade. Figures from international advocacy group, Greenpeace indicate that there are about 27 palm oil projects in Central and West Africa. Most of these projects are owned by companies from Malaysia, France, Belgium, Italy, China, Singapore, US, Canada, and Spain.

With soaring global demand, the Congo Basin has become source of cheap and affordable land for palm oil production at industrial scale. But is the region ready both from an institutional capacity and legal framework perspective?

“No,” says Irène Wabiwa, Senior Forest Campaigner at Greenpeace Africa. “Countries are not prepared for palm oil production at industrial scale. They still have a long way to go.”

“There are still many preconditions to be put in place by governments to make sure agribusinesses of such magnitude are a win-win for all parties involved.”

The absence of proper land use plans in many countries of the region explains the apprehensions of experts. “Governments must have a proper and transparent land use plan,” says the Kinshasa-based Greenpeace campaigner.

Contacted by phone from New York, Puvan Jegeraj Selvanathan, a former executive board member of the Roundtable for Sustainable Palm Oil, an international alliance of palm oil stakeholders promoting sustainable practices and former executive of Sime Darby, told InfoCongo that in most cases, governments do not have the needed information to give out concessions.

“Governments just do not have the depth of expertise to think about long-term scenarios from the land management perspective.” This knowledge deficit is particularly true in the public sector, he argues.

Some governments in the Central African Region have acknowledged this challenge and taken steps to address the issue. A draft national land use plans was agreed upon by stakeholders and now pending final validation in Cameroon thanks to partners such as the Central African regional office of the Wildlife Fund for Nature (WWF).

Over the past six years, development actors have passionately debated the suitability of the Congo Basin for large-scale palm oil production. While governments maintain that palm oil brings employment, roads, schools, and hospitals; environmentalists argue that it leads to deforestation, displaces local communities, disrupts traditional ways of life, and creates a myriad of environmental and socioeconomic risks.

Leading the charge against palm oil in the Congo Basin has been South African-based environmental campaigner, Greenpeace Africa. While recognizing there is a path to responsible production of palm oil, the organization maintains that the absence of proper safeguards simply makes the region ill prepared for such large-scale expansion at this point.

Southwest Cameroon is home to a controversial palm oil project. Sithe Global Sustainable Oils Cameroon (SGSOC), a subsidiary of US-based firm, Herakles Farms set up operations there in 2010. In early 2014, it was obliged to halt operations after incessant protest from conservation groups and local communities.

Cameroon’s government was obliged to review the contract in which it negotiated about 70.000 hectares of land at $1 per hectare. The review resulted in downsizing to 20.000 hectares mostly in Mundemba and Nguti Sub Divisions.

Earlier this year, SGSOC presented a revised three-year palm oil production plan which targets the planting of about 16.000 hectares by 2017 and the hiring of about 800 persons by the end of 2015.

This resumption has led to mixed feelings within the community. Forty-two year old, Obese Moity Hanson, of Talangaye village in Nguti looked worried when InfoCongo visited him early May, 2015.

Standing behind his ramshackle two-roomed house he shares with his wife and three young children, he broods over the fate of his family wellbeing few months after his job at Harakles Farms was terminated.

Inside the house, the laughter and chatter of the children is audible enough as they jump up and down together on the one bed they sleep in at night, virtually ignorant of the weighty problems their father was going through. 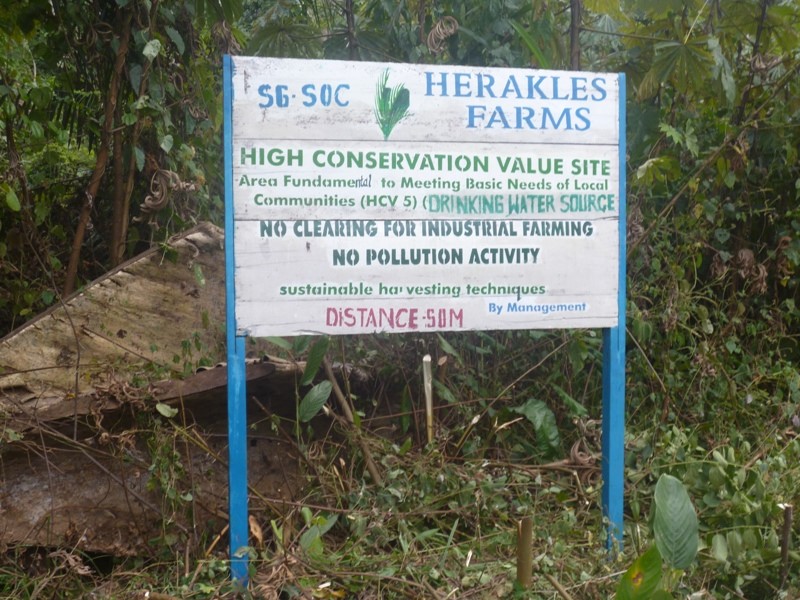 Herakles Farms, subsidiary of New York-based company is involved in industrial scale palm oil production in Southwest Cameroon since the early part of this decade

In early 2014, when the SGSOC’s activities were grounded, the company cut its staff from 900 to just about 70 with Obese Moity one of the victims.

The massive and unexpected layoffs inflicted excruciating pain among men and women and especially youths in Nguti and Mundemba community.

“I abandoned my hunting and farming activities to work in the nursery farm of Herakles. They had promised us better pay and scholarships for our children. Now that dream is a mirage,” Obese said.

Many former Herakle Farms’ workers are very bitter about their unexpected job loss especially after the failed promise by the company authorities of a better life in these impoverished regions.

“They have taken away our forest and farmland and now the job promised us is no longer there. This is making life difficult for us because we can no longer raise income from farming and hunting activities,” laments Ngole Roland, another resident in Mundemba.

Dominic Ngwesse, head of Nature Cameroon, a local NGO working on environmental education and community development initiatives thinks the company is not living by its promise to respect environmental norms and carry out its corporate social responsibility to the local community.

“After arresting and detaining some of our local activists and ordinary citizens who initially opposed the project, now they have sent many others initially employed back home. Roads to their project sites are deplorable. This is far from what people expected,” says Dominique Ngwesse.

But Herakles Farms officials debunk such claims saying in spite of initial difficulties, they are equal to challenges. “Environmental protection has been one of the bone of contention raised by NGOs. But we think we are respecting international norms as far as environmental issues are concerned,” says Elvis Oben, Sustainability Manager of SGSOC

“I am Representing Human Beings Not Animals”

Conservation concerns are not often the top of everyone’s priority when it comes to expansion of palm oil in the Southwest region of Cameroon. Atem Ebako, traditional Chief of Talangaye village located in Nguti Sub Division told InfoCongo that “I am a chief representing human beings not animals.”

Chief Ebako further said that his priority is the development of his community, pointing to the “construction of roads” and “multi-purpose complex” by Herakle Farms as concrete evidence. To him, these activities have resulted in the creation of business opportunities for his community.

There is no denial that the Congo Basin is highly suitable for palm oil expansion. The potential for expansion of oil palm production in the Congo Basin is undoubtedly very large, says Rainforest Foundation UK. “It has been estimated that up to 115 million hectares of the Congo Basin’s forests have the necessary soils and climate for growing oil palm.”

But environmentalists warn that the Congo Basin risk the same situation as Indonesia and Malaysia if expansion is allowed to go ahead in disregard of conservation concerns.

The respect of environmental and social protection principles such as free, prior, and informed consent, he says is central to expanding palm oil in new areas where local communities are involved. “It is important not to have conflicts with local communities because this could disrupt business processes resulting in loss of revenue.”

The Congo Basin is therefore at a critical juncture. The question therefore becomes can development actors sustainably manage palm oil in an ecologically fragile region as the Congo Basin?