This is Part 2 of a three-part story that looks at how coastal communities in Bangladesh are feeling the consequences of climate change. Studies indicate a link between increased salinity in water sources and the reproductive health of women.

DAKOP UPAZILA, Bangladesh _ Early this year, 42-year-old Buli Begum went into labour. But before she could be taken from her village Nalian in Sutrakhali Union to the Dakop upazila (sub-district) Health Complex, 20 kilometres (km) away, her baby was born. Dakop lies 290 km southwest of the national capital Dhaka.

The baby survived, but Buli Begum died due to excessive bleeding.

“Had there been medical help available closer home, she may have survived,” Moniruzzaman Ghazi, her husband, said despondently.

Thirty-one kilometres away from Buli Begum’s home, something similar happened at Pratapnagar village, Asashuni upazila. Halima Begum also went into labour but she was luckier. The 23-year-old survived childbirth, but only just. Her labour pains began shortly after Cyclone Amphan hit her village last May. Her husband, Nur Islam Tuku, a day labourer, had to row her to a clinic at Nawabeki Bazar in Shyamnagar upazila, 35kms away, on the other side of the Sibsha River. The roads were submerged for more than nine months in the aftermath of Cyclone Amphan. Halima Begum’s baby survived too, but was underweight and suffered other health complications.

It is not uncommon for women in low-lying coastal areas in the Khulna district of Bangladesh, where Nalian and Pratapnagar are located, to be forced to travel considerable distances to reach their closest sub-district health centres. Because the community health facilities at Nalian and Pratapnagar villages in Sutrakhali union were dysfunctional, both Buli Begum and Halima Begum had to make the excruciating journey to the upazila health centres for help.

Adding to the woes of these women, their villages are frequently hit by natural disasters, such as floods and cyclones. Global warming and climate change are exacerbating these disasters. A number of research studies show how the warming of oceans is leading to more intense tropical cyclones. Also, as sea levels rise, coastal areas in Bangladesh lose land and face salinity ingress. The sufferings of coastal women have multiplied manifold.

“Before, we could go to the upazila headquarters by road. Now we have to row half the way,” said Kartik Mandal of Hajatkhali village in Uttar Bedkashi union of Koyra upazila.

He recounted how Cyclone Amphan had turned the road into a canal and communication was almost entirely cut off.  The local health facilities either completely collapsed in the aftermath of the cyclone or were hopelessly under equipped to deal with emergencies, he said.

“As most roads in the area have been damaged in the cyclone and floods, reaching the disaster-hit areas quickly enough is difficult,” said SK Tohirul Haque, a medical officer at the Koyra upazila Health Complex in Khulna district. Similarly, it is not easy for patients to reach the hospital. “There is no X-ray machine here, nor is there a facility for ultrasonography,” Haque said.

“There are many problems in [extending] health services to people in marginalised areas. Natural disasters disconnect them even further,” said Sujat Ahmed, a civil surgeon at Khulna Medical College.

It is no secret anymore that global warming and climate change are leading to the warming of the oceans and a rise in sea levels. As a direct consequence of the sea waters rising and flooding coastal villages, saline content in the water sources and soil in coastal areas of Bangladesh has gone up alarmingly, said Atiq Rahman, executive director of the Bangladesh Centre for Advanced Studies (BCAS) and co-recipient of the Nobel Peace Prize in 2007 along with Al Gore and the Intergovernmental Panel on Climate Change.

He pointed out how in the west coast of the country, the villages are located in low-lying areas and their water sources are often inundated by rising sea water, resulting in increased salinity in the groundwater.

According to a study last year, Impact of Salinity on Women’s Health in Coastal Bangladesh, undertaken by the non-profit Leaders-Bangladesh, women who used water with excessive saline content were prone to uterine inflammation and uterine ulcers, which in turn could lead to cancer. Women in coastal areas spend long hours fishing in salty waters. The water they bathe and wash their clothes in is also high in salt content that, among other things, invariably leads to vaginal infections. 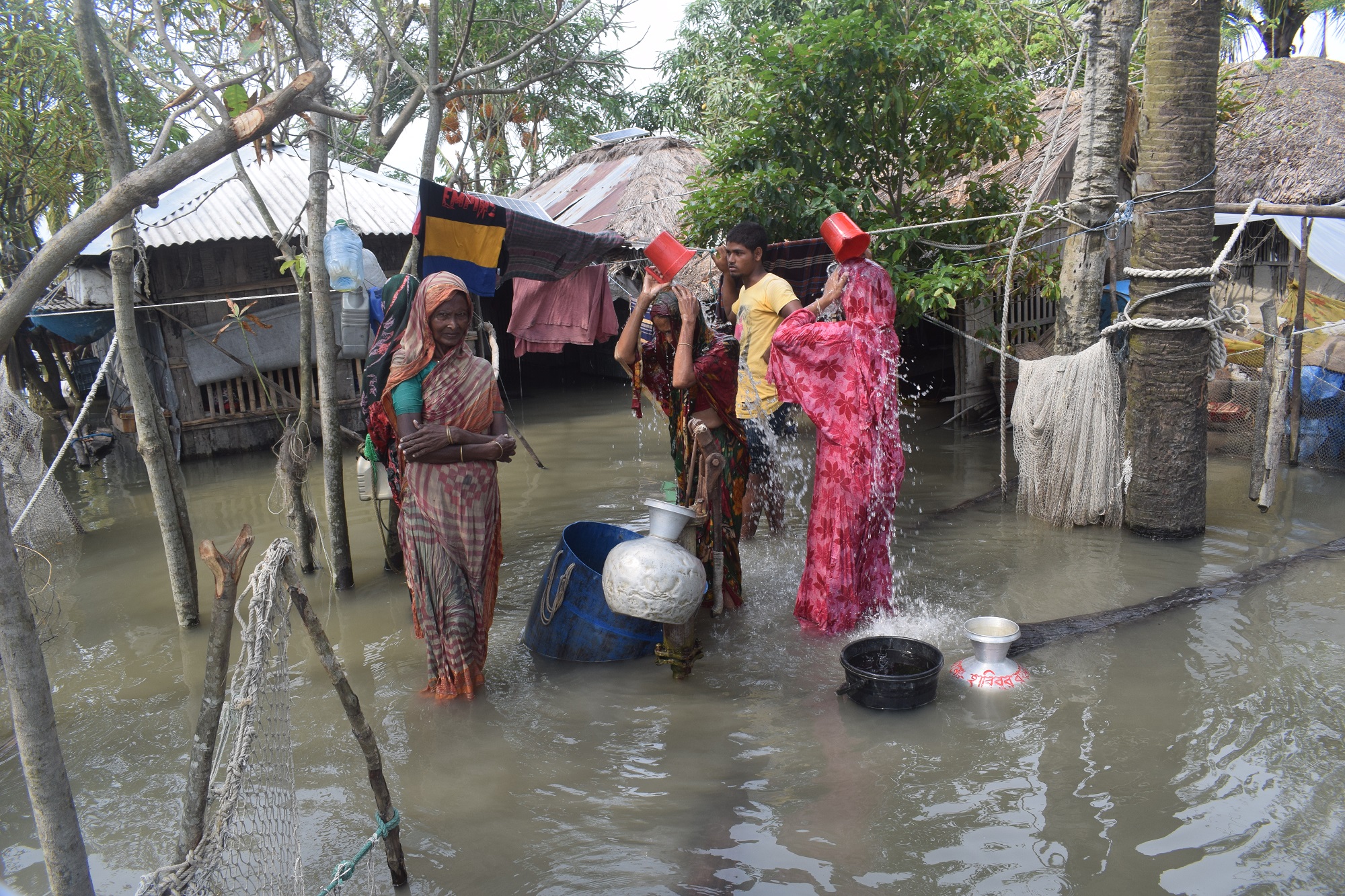 Researchers from the Imperial College, London, recently undertook a survey on salinity and maternal health titled Climate Change and the Environment, which looks at how salt water entering drinking water sources in low-lying coastal areas could impact health and increase the risk of high blood pressure, especially in pregnant women. One of the worst affected countries in the world, the survey found, was Bangladesh.

This is what Asma Begum Shilpi, project manager of the survey, said:

“Tests revealed that the salt levels in the system of some of the women surveyed in Dakop was seven times more than what was permissible.”

“About 60 percent of the people in the region drink salt water, which is particularly harmful to pregnant mothers,” said Santosh Kumar Majumder, a gynecology consultant at the Dakop upazila Health Complex.

It causes high blood pressure, which in turn may cause eclampsia, or seizures during pregnancy. These may lead to miscarriages or an underweight and malnourished baby, Majumder explained.

According to Environmental Health Perspective, a journal published with the support of the US National Institute of Environmental Health Sciences, the salt intake from potable water in the coastal villages of Bangladesh exceeded recommended limits, and it could be aggravated further by climate change-induced sea-level rise.

In 2003 and again in 2011, the Centre for Environmental and Geographic Information Services, a government agency in Bangladesh, found that people in the Dakop region, especially women, consumed 18 to 20 times more salt than what the World Health Organization prescribed.

As a result, the number of pregnancy crises and premature deaths in this region is much higher than other parts of the country, said Hassan Mehdi, chief executive of the Coastal Livelihoods and Environment Action Network (CLEAN), a non-government research organisation.

Between 2012 and 2016, the International Center for Diarrhoeal Disease Research, Bangladesh, monitored 12,867 women from conception to childbirth. Among them were women from coastal and hilly areas. The study found that women living in coastal areas (within 20 kilometres of the sea) were more likely to miscarry than women living in the highlands.

According to Mehdi, embankment management, so that the water sources in the villages do not get flooded with salt water, is key to ensuring well-being in the area. The Bangladesh government is currently leading an initiative to conduct a Strategic Environmental Assessment in the region.

“Efforts have to be made for economic and social development there," Mehdi reiterated. "Resolving the water crisis will go a long way in reducing the health risks in this area."