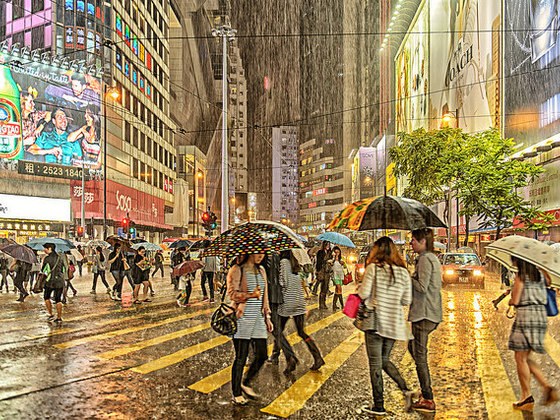 The pitches lie between steep hills to the south, and densely-packed, harbor-side, shiny skyscrapers to the north. The cavernous, water-storage bunker below, which resembles a giant underground carpark and was completed a few months ago, was designed for days when stormwater rushes down from the hills toward Victoria Harbour through a drainage culvert, often while waves lash from the other direction.

During heavy rain events stormwater is automatically diverted from the culvert to the tank, Leung explained, and the city’s drainage engineers follow the action through a smartphone App. “Everything is in real time,” he said proudly of the US$137 million (909 million yuan) system, which was designed to handle 50-year rainstorms. “That will help us a lot just in case of any emergency out there.”

But despite this and other recent investments in Hong Kong’s flood-control infrastructure, climate change experts wonder how well this low-lying, semi-autonomous Chinese territory and global financial centre is preparing for the climate-related impacts that will surely affect its seven million people and physical infrastructure in future decades.

The Hong Kong government prides itself on its tech-savvy, hyper-efficient approach to municipal governance, and it has commissioned several related studies to assess climate change.

It issued a 122-page report last year, for example, detailing its climate mitigation and adaptation efforts and longer-term plans; and in April it launched a citywide climate-change commission tasked with coordinating department-level efforts to reduce greenhouse gas emissions and prepare for climate-related impacts.

But some climate change experts wonder if the government can muster the political will needed to coordinate a multi-faceted response that engages the city’s powerful business community on mitigation efforts; educates the public about climate-related risks; and makes bold planning decisions with an eye on worst-case scenarios.

“It's very hard for [the Hong Kong authorities] to change standard operating procedures,” said Paul G. Harris, a professor of Global and Environmental Studies at the Education University of Hong Kong.

“Officials will give you long lists of things they are doing, but all you need to do is walk around and see that it's almost meaningless,” added Harris, the author of What’s Wrong with Climate Politics and How to Fix It. “For example, you will see buildings going up just a few feet above current sea level.”

But Hong Kong’s location and physical features present particular challenges. The city is regularly battered by typhoons and its dense urban grid traps heat and makes sweltering street-level temperatures even hotter. Average July temperatures are 28.7C, and a further increase in temperatures is a potential health risk, officials say, especially for people who live in tiny apartments without air conditioning.

Because Hong Kong’s urban centres are bordered by sea on one side, and tall hills on the other, engineers like Leung have long worked to prevent waves and rainwater from damaging buildings, flooding metro tunnels and causing landslides on the steep hillsides that border many neighbourhoods.

Tong Hai Wai, a scientific officer at the government-run Hong Kong Observatory, which makes weather and climate forecasts, said in an interview that all of those factors are worrying. But he said the biggest concern is that rising sea levels may exacerbate the damage caused by storm surges during tropical cyclones (which typically occur between June and October).

Hong Kong last witnessed that combination in a serious way in 2008, he said, when a storm surge caused major flooding in the seaside village of Tai O. The Observatory currently predicts that flooding of that scale will happen every 50 years, but Tong said it could happen yearly if global sea levels rise by a meter by the end of the century — one of several  scenarios forecasted by the Intergovernmental Panel on Climate Change (IPCC).

Architects and planners are already taking climate change forecasts into account for building projects in Hong Kong, Tong said: “However, if sea level continues to rise, then sooner or later there will be a chance of a big wave hitting the buildings.”

The Business Environment Council, a non-profit consortium of Hong Kong businesses that recently issued a report urging caution about how climate change would impact both physical infrastructure and investments in the city, declined to comment for this article.

Tong said the department bases its local climate forecasts on data issued by the IPCC, which said global sea levels could rise by anywhere between about a quarter of a metre and nearly one metre by 2100. Some leading climate scientists now predict that global sea levels may rise twice as fast over the same period, but Tong said the Observatory would wait until the IPCC endorses new estimates to begin changing its Hong Kong-specific forecasts.

Asked about Hong Kong’s overall climate change preparations, officials at the Environment Bureau pointed to the government’s 2015 inter-agency report, which details a range of steps it is taking to address the problem.

The report says that drainage networks have been made more climate-“resilient” since 2008, and that the city has started to build flood-retention lakes, artificial wetlands, porous pavements and other projects to reduce flooding risks.

It also says that sustainable building guidelines were introduced in 2011, and that the Civil Engineering and Development Department conducted a review of the city’s coastal structures in 2013.

“My own sense is that Hong Kong is quite well-prepared for storms, rains, floods and landslides because we have had to deal with them on an ongoing basis,” Christine Loh, Hong Kong’s undersecretary for the environment, wrote in an email.

She added that the government studies the latest IPCC reports “and new assessments so that all relevant departments dealing with defensive infrastructure and emergency activities factor into their new plans the additional risks.”

In a 2012 paper, City University of Hong Kong Professor Maria Francesch-Huidobro argued that the city’s government had faced a “chronic lack of capacity for horizontal coordination” ever since the UK returned the former colony to Chinese rule in 1997, and that the same lack of coordination had blocked efforts to create a “climate policy that is institutionalised and consented to.”

But Loh said the paper was now outdated, and that the creation of the steering committee was proof of the government’s commitment to tackling climate change.

“Our climate change targets and action plan will also be done by the end of the year and that too will clearly show the fruit of better coordination plus massive mitigation and adaptation actions to improve resilience and make Hong Kong climate-ready,” Loh added.

But Alice Chow, a professor at the Education University of Hong Kong who studies climate change policy, said government could still do a better job explaining the specific risks that climate change to the general public — for example, possible floods in the underground metro system operated by the MTR Corporation.

“We need a mediator to translate this kind of technical message into a campaign that the general public can understand and start to think, from their perspective, ‘Okay, what would I do If I really have to face this kind of sea-level rise situation one day?’”

An MTR spokesperson, Kit-fong Law, declined to comment, but referred a reporter to a 2015 company report saying that new railway projects are built to withstand two-hundred-year rainstorms, and it has “special procedures” for handling typhoons.

For now, the task of explaining the nuances of local climate change impacts often falls to individual departments. In Happy Valley officials from the Drainage Services Department said they held meetings with people who live near the new rainwater-storage tank to explain the project and solicit feedback.

They were generally happy about having better flood defences, Leung Cheuk-lun recalled, but some had a question: Could they park their cars in the tank during the dry season?