Is It Too Late For Sea Ranching Through Aquaculture To Turn The Tide?

Is It Too Late For Sea Ranching Through Aquaculture To Turn The Tide?

After banning the illegal fishing of sea cucumbers, Italy hasn’t found a good solution, either for corporations or the environment. So poaching continues.

In Italy, while a ban established in 2018 has not stopped the poaching of sea cucumbers, the State hasn’t regulated the legal activities that would have allowed the development of a new business sector, taken away opportunities for illicit trade, and protected this species, which plays a key role in the marine ecosystem.

The holothurians, animals belonging to the same family of starfishes and sea urchins (the echinoderms), eat the seafloor sediments and expel them clean, and so they allow the growth of seagrass and the consequent increase of oxygen in the water. They also provide organic substances to other beings living on the seabed: Good reasons to protect this endangered species.

Two marine experts in Sardinia were experimenting to kickstart the legal production of sea cucumbers, much sought after by Asian markets. However, they were forced to stop after the ban introduced by the Ministry of Agriculture, Food and Forestry (MiPAAF), in the wake of investigations launched in Taranto on poaching and trade by organized transnational networks across the Adriatic sea.

As a marine biologist and oyster farmer, Franco Rossi (this is a pseudonym, as the interviewee prefers to remain anonymous), knows the importance of sea cucumbers. He had a goal: to launch the first holothurian aquaculture project in Italy in the Gulf of Alghero, in the north-west of the island. “Marine biologists have a fixed idea, to make the best use of resources,” he explained on a mid-July afternoon, during a break from work.

“I wanted to achieve perfect recovery and set up a multitrophic system” – i.e., system in which several species can coexist, so that the waste of one can be the nourishment of the other. “There would be oysters on the surface and sea cucumbers on the seabed in the plant, to improve the biological cycle,” he added.

His was an experimental and non-productive project, unrelated with the actual sea cucumber trade. In 2017, he applied to the Sardinian regional government for the concession of a stretch of sea, obtaining a permit in an area near Alghero, Italy.

Whilst local newspapers published stories in 2017 about Rossi’s first holothurian aquaculture project, the holothurian business took off in Italy and everything became complicated for the entrepreneur. Rossi was also approached by some Chinese entrepreneurs willing to buy the products and invest in the company: “For them, holothurians have an enormous value, they are like a drug. I realized that from a project, my business could turn out to be dangerous.” When on 27 February 2018 the MiPAAF placed a ban based on “Scientific evidence from the CNR – the Institute for the Coastal Marine Environment in Taranto,” which highlighted the role of holothurians in the marine ecosystem and the risks of indiscriminate fishing, Rossi accepted the decision – thinking it was a temporary stop. “Since then, however, the Ministry has reiterated the ban from year to year, without adopting a solution.”

Giuseppe Tanca, a fish trader who had decided to market sea cucumbers harvested by fishermen from Porto Torres on the north coast, also spoke out against the decision. “I used to travel the world and in Singapore I had seen shops with holothurians of all qualities from everywhere in the world,” he recalls. Thus, between 2016 and 2017, when large-scale organized distribution began to pay lower prices for its supplies of fish and seafood, Tanca opened a company called Oloturia. He made deals with fishers to buy the sea cucumbers they brought in from the waters with fish and shellfish: “We are full of them,” he said, “and, like it or not, they end up in the nets. I asked the fishermen to keep the ones longer than 25 centimeters (the holothuria tubulosa can be 35 centimeters long) and to throw the others back into the water.” Tanca paid between 15 and 25 cents each for the holothurians and the sale was also convenient for the fishermen, whose revenues are often reduced by the cost of diesel for their boats.

Inspired, Tanca invested money in the holothurian trade, converting the sheds where cleaning and drying of this species could took place as “they lose 90% of their weight,” he points out. He then resold the product to Chinese wholesalers with companies in the Netherlands, professionals who wanted everything traced with invoices and transfers, at a price of between 50 and 60 euro per kilo, which multiplied in value once it arrived in Asia. “Some Chinese traders living in Italy were asking to buy and pay under the table, but I decided not to accept.”

After the ban imposed by the Ministry in 2018, the entrepreneur, assisted by the lawyers Luigi Poddighe and Gian Comita Ragnedda, filed an appeal with the Regional Administrative Court of Lazio to request its annulment. “We contested the over-reach because the research was based on the coast of Taranto, already impoverished, and not on the national territory,” Poddighe explains. Tanca also appealed to politicians and administrators, but without ever getting concrete answers. “I closed the company in 2019 and put the shed and material up for sale,” he explains.

“We could regulate the activity, but no one was interested. Both the fishermen and us entrepreneurs are against plundering the sea, so that fishing can be sustainable.”

Tanca was the only entrepreneur in the area to deal with holothurians, but one wonders what would have happened if others had entered the trade, triggering competition and thus even more overfishing of this species. He, for his part, advocates a solution like the one adopted in Greece, where it is possible to fish holothurians for a few months a year or within certain quantities. “Better a quota system,” Rossi argues, “which is a good deterrent, even if some illegal trade remains. Aquaculture is a safeguard,” he argues.

Meanwhile, in January 2020 the University of Rome Tor Vergata began a research project on aquaculture. “We are evaluating the use of sea cucumbers in fish farms,” researcher Arnold Rakaj explains, “and working on mapping and stock assessment of holothurians. We started in Apulia and Calabria and are now extending this to all Italian marinas on behalf of the Ministry. We want to acquire the scientific basis through which to define a sustainable fisheries management model, for example by defining quotas. This is the first and largest European mapping of this resource.”

This story was produced with support from Internews' Earth Journalism Network. It was first published in Lavialibera on 21 September 2022 in Italian. It has been translated to English by Marion Sarah Tuggey and lightly edited for length and clarity. 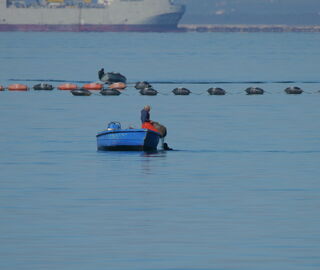