Keeping the forests we’ve got

Keeping the forests we’ve got

The conservation of forests in countries like Suriname with high forest cover and low deforestation rates is not a priority for the United Nations Framework Convention on Climate Change (UNFCCC). Yet forest people suffer enormously from the effects of climate change.

Suriname, a small country squeezed between northern Brazil and the Atlantic Ocean, is 90 per cent rain forest. One of the most damaging effects of climate change there is extreme rainfall. Every May for the last three years, in the big rainy season, rivers and creeks have overflowed, flooding houses and fields, ruining crops and threatening starvation.

Maroons (people descended from runaway slaves) and indigenous people live along the rivers and creeks, and they are worried. They voiced their concerns in a workshop in January, asking what to do when the floods were coming.

"We didn’t have a helpful answer for them," said Iefna Vrede, a development worker from the Saramacca, one of the five Maroon tribes in the forest. "The government doesn’t have enough resources. So we advise people to look for somewhere better to live. But if they move to higher ground they will have further to walk to the river, a particular problem for the many elderly women."

Vrede is a member of Hesi (Quick), a community group which helps flood victims. The government's help came late. It intends to establish forest settlements, but lacks money.

"We're staying where we are, " said Hugo Jabini, coordinator of the Union of Saramacca Chiefs. "Nobody is talking about moving yet. Some who can afford it intend to build another floor on their houses, so that they can move their goods upstairs when a flood comes. "

Loraine Jubitana, of the Union of Indigenous Village Chiefs, says people in the village of Tepu need answers. "They're already living on higher ground, and still they're flooded", she says. "If it happens again this year, they don’t know what they'll do."

No reward for intact forests

The Clean Development Mechanism (CDM) of the Kyoto Protocol, the global climate treaty, allows industrialised countries obliged to reduce their greenhouse gas emissions to invest in projects which reduce emissions in developing countries, instead of making more expensive reductions at home. They gain carbon credits: the developing countries can earn money and access to technology.

But while the CDM allows projects which plant new forests or restore degraded ones, it does not include the conservation of existing forests. So countries which try to prevent the destruction of their forests cannot benefit.

Carbon dioxide from deforestation accounts for about 18 per cent of global greenhouse gas emissions from human activities. Keeping the forests intact is therefore vital to cutting overall emissions. Debate at the 14th Conference of the Parties to the UNFCC (COP-14) in Poznan in 2008 focused on how to avoid forest loss in the new climate change agreement which must succeed the Kyoto Protocol after 2012. This could be of huge benefit to countries with low levels of deforestation like Suriname, Guyana, Belize and those in the Congo Basin.

Suriname knows how much is at stake. Its environment minister, Joyce Amarello-Williams, told COP14 that forest conservation must be part of the proposed global scheme to protect native forests, called REDD – Reducing Emissions from Deforestation in Developing countries.

"Suriname believes that conservation of existing pristine forests and protection of their carbon reservoirs must be included in any future REDD regime," she said.

"With our forests we are contributing to the mitigation of climate change. Yet Suriname is one of the countries most vulnerable to its effects."

Will REDD fix one problem and create another?

The Poznan summit agreed the broad rules on how REDD will work, though how to include them in the post-2012 agreement is not yet settled.

REDD sounds like an idea whose time has come, yet it has its doubters. At its simplest, they worry about what could happen once it pays the rich to keep the forests intact. Will those who can save money by paying a country to conserve its forests stop to think about the rights of those who live in them? Will other species be protected? And how would you police a REDD project?

The Terrestrial Carbon Group (TCG), a thinktank, has proposed that the post-2012 agreement should include another trade mechanism instead of REDD.

"If you do something to protect carbon and keep it forever instead of letting it go into the atmosphere, you should be able to sell that carbon storage service to someone who needs to buy carbon reductions," says Ralph Ashton of TCG.

The world's population is expected to grow from under seven billion people today to nine billion by 2050. The demand for food, fibre, carbon storage and biofuels will increase enormously.

"If all you do," says Ashton, "is focus on countries with high rates of deforestation, you ignore what is likely to happen in the next fifty years. You might fix the problem in one place and all the cattle, all the oil palm that was being produced there would need to find another home to be produced."

"Where will it go? It will go where there is land. So countries which have low historical rates of deforestation will come under pressure to deforest." Suriname's forest people need answers – the right answers. 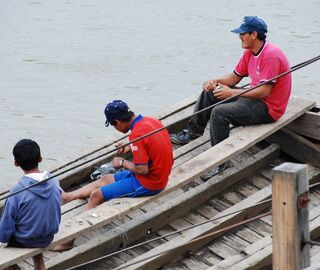