Landless and exposed to the elements

Landless and exposed to the elements

Uganda's Batwa communities have been marginalised for decades. Now they are struggling to cope with extreme weather conditions, and want better homes to protect them from storms and landslides.

Among the posh office premises of the Red Cross Society and the court of adjudicature on Muchingo hill, in Uganda's western district of Kisoro, are ramshackle houses in which a community of Batwa people live.

Their temporary houses are made of a few sticks covered by polythene bags. Some of the Batwa – dwarves who grow to an average height of four feet or less – sleep on beds of dried grass and leaves. Whenever it rains their houses leak and everything, including their fireplace and bedding, gets soaked, leaving them wet and cold.

Traditionally, they lived in caves and peacefully shared their habitat with wild animals, including mountain gorillas, in the country's lush south-western forests.

The region is endowed with a wide range of ecosystems ranging from Savannah grasslands to high altitude wetlands and alpine vegetation. In recent decades it has been the focus of conservation efforts, and in the 1970s legislation was passed to outlaw hunting. The Batwa population was seen as a threat to wild animals, and many were forcibly evicted following the opening of several conservation parks in the 1990s.

The Bwindi Impenetrable Forest, for example, became a national park and world heritage site in 1992 to protect the 350 endangered mountain gorillas within its confines. It was good news for the gorillas but bad news for the Batwa: in the process of establishing the national park, around 2,000 of those living in the area were evicted.

Today the majority of the Batwa are scattered in the mountainous west and south of the country. With no compensation and no alternative livelihoods after the forest evictions, most have taken to begging or depend on handouts from neighbouring communities, who struggle to help them cope. As a marginalised group living an unconventional life, they stand to be among those worst affected by increasingly harsh weather conditions in Uganda.

While some have become landless day labourers and small-scale cultivators, others live at the foot of unstable hillsides, prone to landslides. Whenever it rains, rocks are dislodged and roll down the slope, a threat to anyone unfortunate enough to be in their way.

According to the Ugandan principal meteorologist at the Ministry of Water and Environment Alloysius Kagoro, the Batwa "were affected by the El Niño rains of 1997 to 1998, and the most recent in 2006". Some of their makeshift houses were covered by landslides and crops (for those who have land) were washed away.

"We want land where we can settle down like other communities and plant crops like maize, beans to eat and sell, for additional income… and land where we can stay permanently without anyone chasing us away," Safari Manday says, with a pensive look on his face.

Some Batwa now have access to land of less than one acre, secured for them by the Church of Uganda, the Mgahinga Bwindi Impenetrable Forest Conservation Trust (MBIFCT), and a number of private donors and individuals. But the plots are often too small for meaningful activities like agriculture. And few have been able to obtain titles for the land in their name, leaving them insecure.

The Batwa also need stronger and bigger houses, away from landslide- and flood-prone areas, as mother-of-three Justina Rukundo explains:

"This house is too weak," she says. "When strong winds come, it gets blown away and when the rains come, we get wet. All I need is a strong house where my children and I can rest without any worry."

Other communities live beside wetlands which are liable to flood. Every time it rains, the run-off from further up the slope inundates these areas, and the resultant overflow soaks everyone living there.

Despite all the untold suffering and climate change threats, the Batwa have no insurance for their property, no wealthy relatives to turn to in times of need, and no political voice to change their situation.

They compare themselves to their counterparts in Rwanda. There, they say, the state has provided communities with permanent houses, and argue that the Ugandan government should do the same for them. They also want to have access to the forests to collect products such as medicinal plants, and to be involved in the management of the parks, taking advantage of the knowledge they have of the forests.

"We want to be free to go to the forest and get what we want without any questions like… who are you and how do you enter the forest?" says John Rwubaka, who is seen by a substantial number of the Batwa as chief. He also acts as a mediator or representative when conflicts arise with neighbouring communities.

"We want representation at both local and parliamentary level in Uganda to talk for ourselves so the president can hear us. People come to us seeking votes, we give them, but when they go to parliament they do not tell the president that we are suffering like this," Rwubaka adds.

Should El Niño rains occur in the region again, as happened in the north and eastern parts of the country late last year, it is feared that the Batwa's very means of survival, including their makeshift houses, would be demolished. Flooding could even lead to deaths.

It is now more than a decade since the establishment of Bwindi Impenetrable Forest and the eviction of the Batwa from the forest lands. During this time, there have been numerous efforts by a variety of organisations pursuing different objectives, all claiming to help the Batwa community. But very little has changed. Most are still landless, squatting on other people's land, and others are still living in pathetic dwelling places.

Batwa representatives claim the few programmes intended to distribute conservation benefits to local communities have consistently failed. They are now seeking to secure a proportion of the park visit fees that go directly to the Uganda Wildlife Authority, especially since this revenue is derived from traditional hunting and gathering areas that they are not permitted to enter.

For many people in developed countries, as well as the rich in developing countries, the threat of climate change may seem distant. But the Batwa and people like them are already feeling its effects, and have almost nothing to help them to cope. 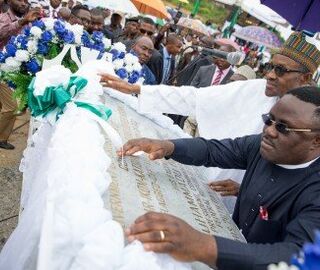 Africa
The information and communications technology used in some countries as a means to fight against climate change
© 2022 Earth Journalism Network All rights reserved.