Hundreds of environmental activists from various civil society groups marched on the streets of Manila Tuesday and filed a complaint before the Commission on Human Rights (CHR) against 50 multinational companies and state-owned producers of crude oil, natural gas, coal, and cement, which are accused of violating human rights by aggravating climate change impacts in the Philippines.

In a 40-page petition, 13 environmental and civil society groups and typhoon surviviors led by Greenpeace Southeast Asia, demanded that the so-called “big polluters” be held accountable for contributing to climate change, saying that “climate change interferes with the enjoyment of our fundamental rights as human beings.”

The petitioners cited the study conducted by scientist Richard Heede of the Climate Accountability Institute, which has quantified the breakdown of cumulative global carbon dioxide and methane emissions since the industrial revolution began. 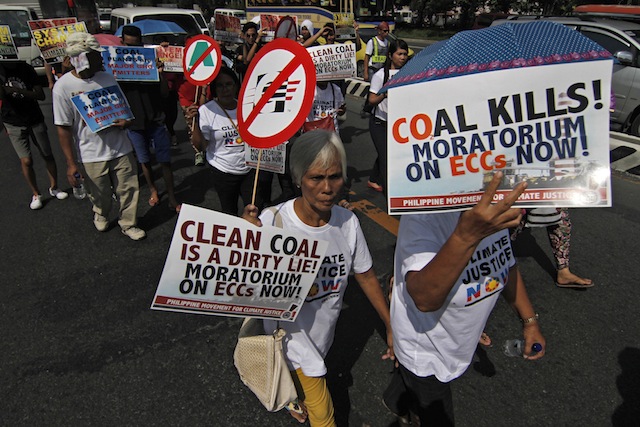 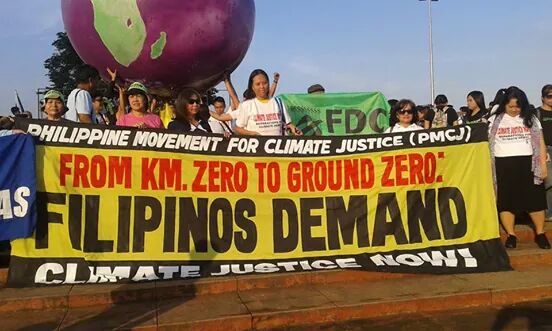 The Carbon Majors findings are of serious importance and consequence to the Philippines due to the country’s high vulnerability to the impacts of climate change. The findings call attention to the role of the Carbon Majors because these producers contribute a significant portion of the estimated emissions of greenhouse gases. According to the United Nations Intergovernmental Panel on Climate Change (IPCC), continued emission of these gases “will cause further warming and long-lasting changes in all components of the climate system, increasing the likelihood of severe, pervasive, and irreversible impacts for people and ecosystems.”

“We hope that the Commission on Human Rights of the Philippines will take the bold step in being the first in the world to hold big corporate polluters accountable for their contribution to the climate crisis,” said Atty. Zelda Soriano, legal and political advisor for Greenpeace Southeast Asia.

Soriano said the Carbon Majors should be held accountable for violations or threats of violations of Filipinos’ rights (a) to life; (b) to the highest attainable standard of physical and mental health; (c) to adequate food; (d) to water and sanitation; (e) to adequate housing; and (f) to self-determination resulting from the adverse impacts of climate change.

They said special attention should be paid to marginalized, disadvantaged, and vulnerable people and communities, such as women, children, persons with disabilities, those living in extreme poverty, indigenous peoples, and displaced persons; as well as the collective right of Filipinos to development. The workers and workers’ organization among the Petitioners are also demanding accountability for the human rights implications of climate change on their health, labour productivity, and work.

“The call for Climate Justice is a call to hold accountable those responsible for the climate change crisis. Clearly, due to the action and inaction of a few, the rights of the vast majority who are vulnerable are trampled on,” said Naderev “Yeb” Sano, climate advocate and Spiritual Ambassador to Our Voices.

Lidy Nacpil, Coordinator of Asian People’s Movement on Debt and Development added that the petition is an important step in making emitters of “dirty and harmful energy” accountable for their contribution to the climate crisis. “They cannot continue taking our lives and livelihoods from us with impunity,” Nacpil said.

On the other hand, Gerry Arances, the National Coordinator of the Philippine Movement for Climate Justice lamented that multinational companies must “seize their investments on environmentally-destructive and inhumane projects and provide reparation to the victims of the crisis they primarily caused.”

The accountability of each of the Carbon Majors they said could be based on its share in the estimated global industrial emissions of carbon, and from such reasonable time when a business is supposed to have acquired knowledge of its product including the impacts on the climate, ecological balance, and people’s health, or when it has been informed of the impacts of its product.

They cited that despite forecasts and warnings provided days in advance, super-typhoon Yolanda killed more than 6,000 people, affected millions of others, and devastated areas in central Leyte in 2013. According to the World Bank, disaster database shows that between 2000 to 2008, weather-related disasters accounted for 98% of all people affected and 78% of all the people who died due to disasters in the Philippines. The World Bank also stated that annually the country has to spend 0.5% of its GDP for natural hazards. Between 1998 and 2009 the country had to deal with costs of up to US$24.3 billion (23.9% of GDP) due to storms, which affected 12.1 million people.

“We pray that the CHR heed the demand to recommend to policymakers and legislators to develop and adopt effective accountability mechanisms that victims of climate change can easily access,” said Fr. Edwin Gariguez, Executive Secretary of Caritas Philippines and a recipient of the Goldman Environmental Prize. Inspired by Pope Francis, the Church will support this Philippine climate change and human rights complaint and will continue to serve as a strong ally in the struggle for a socially just, environmentally sustainable, and spiritually rich world that the Pope and the broader climate movement are fighting for, he added.

“Though uncertain of the outcome, I know that adding my name as a petitioner is important and supports a much greater cause that will ensure environmental justice for all Filipinos and the rest of humanity,” said Elma Reyes who started the online petition supporting the human rights and climate change complaint.

Environmental activist Von Hernandez said: “The time has come to make the big polluters pay. They must be held liable for the immense and untold damage being caused by global warming impacts especially on the weak and vulnerable.”