Left to fend for themselves in Laos

Left to fend for themselves in Laos 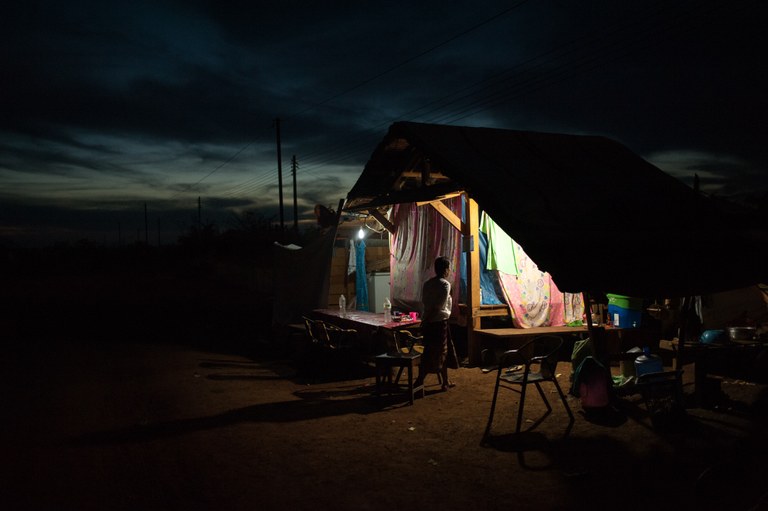 A makeshift hut in Pindong camp, one of five temporary shelters for people affected by a dam collapse in southern Laos in July. People here have built the huts as extensions, saying the tents are too hot during the day time / Credit: Visarut Sankham

Attapeu, LAOS_It is a sunny afternoon in the Sanamxay district of Attapeu province in southern Laos. People shop in the local market while students ride by on motorbikes headed for school. However, a few kilometres up the dirt road toward a cluster of villages along the Xe Pian River, the view is totally different.

The sun long ago dried up the mud left by a deadly flash flood following the collapse of a portion of the Xe Pian-Xe Namnoy dam on the night of July 23, but the destroyed houses remain untouched and the wreckage of vehicles is everywhere.

Up the hill from the disaster zone are temporary camps where the homeless villagers now live. While the residents of two out of five camps have moved into temporary new homes already, hundreds of families still have to live in tents.

Even six months after the collapse of the Saddle Dam D section of the Xe Pian-Xe Namnoy hydropower project, which severely destroyed six villages in southern Laos and buried more than 55,200 hectares of land under deep floodwater, the victims still have no certainty about their future. 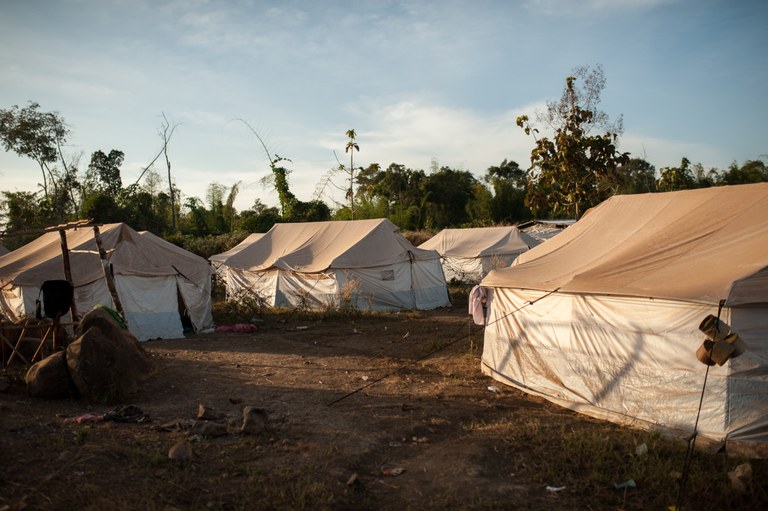 The camps’ residents are also suffering from a severe shortage of basic necessities as donations have dropped drastically after the incident stopped making headlines. Many of the displaced said they have to make do with what little they get from the authorities.

Vieng Sianpongsai, a displaced villager at the Pindong refugee camp, told The Nation that it was difficult to make a livelihood and they could not even repair their homes as the Lao government and the dam’s project owners have not reached an agreement on the compensation amount for the victims.

“We have been living in tents for six months now because the temporary houses the dam company is building for us are not ready yet,” Vieng said.

“It is unbearably hot inside the tents during the day, and very cold at night, so we have had to build wooden shelters outside to rest,” she added. “However, the camp is more pleasant at night as the authorities have already installed electricity.” 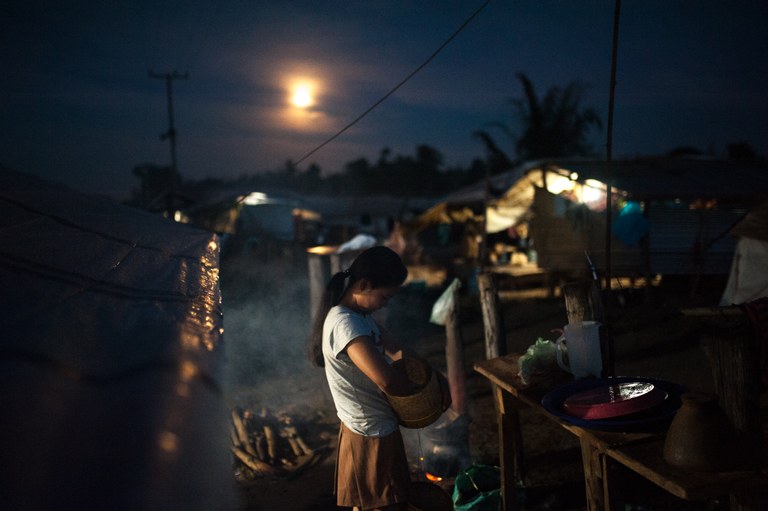 A resident in Pindong prepares sticky rice for breakfast. Each resident receives 20 kilograms of rice and around $US30 in compensation each month. Many residents say it's not enough / Credit: Visarut Sankham

Despite the tough living conditions, Vieng said the greater hardship was not being able to earn a living as they are not allowed to leave the camp to find work, while aid and supplies have stopped trickling in.

Several sources, including locals and international agencies, confirmed that each camp resident was given a monthly subsidy of 100,000 kip (Bt400), a daily allowance of 5,000 kip (Bt20) and 20 kilograms of rice per month.

“We don’t know how to survive. We don’t have jobs or anywhere to go. The allowance from the government is too small to survive on and we only get rice with nothing to eat it with,” Vieng said.

“In the first few months, we got plenty of donations and supplies from international agencies and the private sector, but after our problems stopped getting media attention, we were forgotten.”

She said the greatest need now was for food and seasoning, cooking equipment, supplies for newborns as well as farming equipment and essential tools to repair their homes. 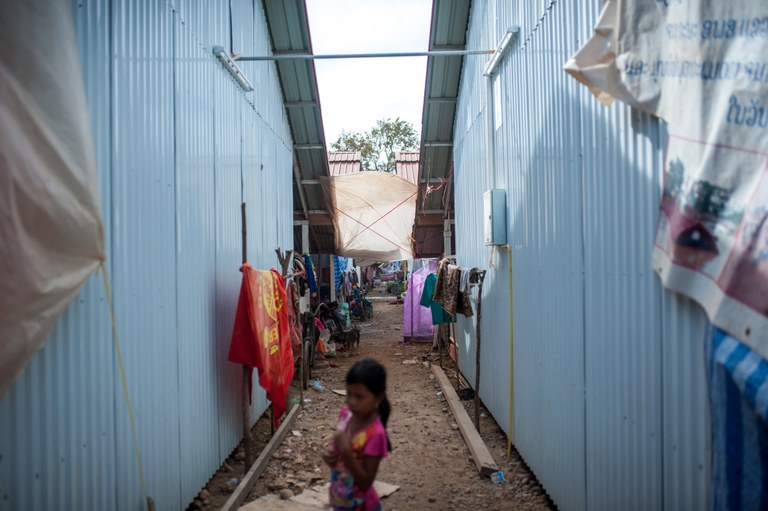 Hadyao is one of the temporary residences where sturdier structures have been completed / Credit: Visarut Sankham

Katouk Singsouvong, owner of Attapeu One Love restaurant and a local volunteer, confirmed the scarcity of supplies at the refugee camps and said her charity group was one of very few that still provided aid.

“Another problem we have observed is uneven distribution, as some camps that are farther [away] and tougher to access, such as Pindong and Tamoryord, get a lot less than other camps, such as Hadyao, that are closer to the city,” Katouk said.

She revealed that though the Lao government and the private sector have done their best to provide for the victims, it was still not enough as the owners of the dam project are providing little or no compensation and donations have more or less stopped. 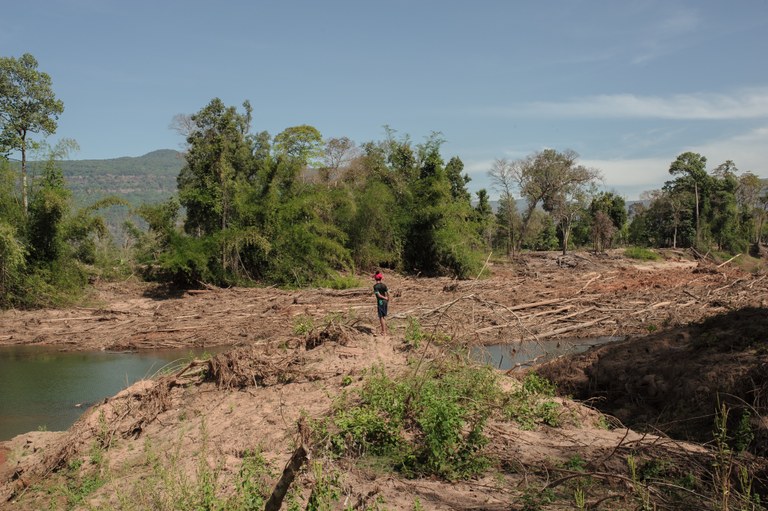 Hin Lath village (pictured here) was one of the most affected by the Xe Pian-Xe Namnoy dam collapse / Credit: Visarut Sankham

According to the dam operator's account, a deluge of water from the extraordinarily strong monsoon breached the earth-filled Saddle Dam D and released more than five billion cubic metres of water in the form of a strong flash flood, with waves smashing down Xe Pian River.

Xe Pian-Xe Namnoy hydropower dam is a US$1.2 billion joint venture project between South Korean and Thai investors -- SK Engineering and Construction (SK E&C), Korea Western Power (KOWEPO), and Ratchaburi Electricity Generating Holding (RATCH) – along with Lao Holding State Enterprise (LHSE). It was intended to generate electricity capacity of 410 megawatts, 90 percent of which would be sold to Thailand.

According to an earlier report from Radio Free Asia, four investors on the dam project are preparing to repair the collapse using a loan from a bank in South Korea.  Field construction will begin in March and it is expected to finish late this year, the RFA report said. Meanwhile, preliminary results from an in-depth investigation by the dam company into the cause of disaster have been submitted to Lao government but not yet released publicly.

This is the first in a series of reports related to the fallout of the disaster at Xe Pian-Xe Namnoy Dam in southern Laos. It is adapted from the original story, which was published in The Nation on January 21.