Leptospirosis, a zoonotic disease, has been a continual problem for rural communities in Fiji - often with fatal consequences.

Editorial note: This article is the first of Fiji Sun's two-part series on One Health. Here, the Sun focuses on Leptospirosis, a potentially fatal zoonotic disease.

For the first time, villagers of Korobebe Village on the main island's western side (Sabeto), had lost two young lives to a lethal bacteria. Families of the two victims, Kavekini Tubuisusu and Marika Lagilolo, are still reeling from the sudden loss of their family members six months later. The cause? The two, aged 17 and 22, died of leptospirosis during an outbreak of the disease.

Leptospirosis, also known as Weil’s disease, is a bacteria that mostly spreads through the urine of infected animals and can cause severe flu-like symptoms in people. In some cases, it causes death.

Responding to emailed questions, Fiji's Ministry of Health (MOH) said leptospirosis was an endemic disease in the country and was responsible for substantial morbidity and mortality in the country.

The MOH data indicated that in 2012, two large outbreaks occurred with 576 reported cases and 40 deaths.

This year alone, the death toll stands at 36 as of May 17. And every year, leptospirosis continues to claim people’s lives.

Experts argue that Fiji needs a One Health (OH) framework to tackle problems like leptospirosis. OH encourages multisectoral collaboration where effective policies relating to animal, public and environmental health can be formulated.

Such collaboration requires activities that support the community to understand their own environment.

“The most immediate thing we can do is reduce the risk of severe disease and death, by educating people to present early to a health care facility,” Mr. Reid said.

Mr. Reid conducts zoonotic research in the Pacific, including Fiji. One of the studies he co-authored explored the possibility for a OH collaboration for leptospirosis in Fiji.

Korobebe is about a 40-minute drive from Nadi Town. It is in the interior of Sabeto Valley, surrounded by lush green forests, with a river on one side of the village.

The village has 303 registered residents, according to headman Ropate Naiuluvatu.

Korobebe is blessed with land and a river that provides sustenance. Cattle rearing, raising chickens, pigs, and farming are all part of a day’s work.

During the COVID-19 lockdown, Korobebe youths occupied themselves with games of touch rugby or idle swims in the river.

This would also mean swimming and playing during and after a heavy downpour.

While villagers had heard of the dangerous bacteria that existed in their midst, they lacked the knowledge of leptospirosis’ fatal impacts – that is, until the deaths of the two youths.

Leptospirosis is transmitted between animals and humans and occurs indirectly through contact with water, mud or food contaminated by urine from infected domestic animals including cattle, dogs, horses, pigs, or most commonly in Fiji, rodents.

Leptospirosis can also be transmitted directly through exposure to infected animals.

Mr. Navilalutu said Tubuisusu and Lagilolo were experiencing headache weeks prior to their death. Villagers had an awareness that something was wrong, and within days of showing severe symptoms of infection.

The MOH said the incubation period for a single pathogenic Leptospira was five - 14 days (range one – 30 days).

But Leptospira bacteria can survive in moist soil and mud up to 28 days under the right temperature, Mr. Reid said.

“What that means is that soil is potentially one of the biggest issues, because if bacteria survive in soil, then the animal might not even be present anymore, because it’s contaminated the soil,” he said.

“If there’s rainfall, that soil becomes mud, that’s the transmission to people. So, it’s transmission through water and muddle, or soil, which splashes through the eyes and the mouth, or cuts and abrasion in the skin.”

The MOH says clinical and epidemiological studies have identified males and young adults aged 20-49 years as high-risk groups, most likely related to greater occupational and recreational exposure to animals, soil, mud, and water. The disease can however infect anyone.

Fiji has an estimated annual incidence of 39 cases per 100,000 people.

Tubuisusu and his siblings were usually tasked with taking the cattle out to graze in the nearby pastures every morning and bringing them back every afternoon.

Their cattle were usually tied on the slope close to their compound. Tubuisusu, 17, was to begin Year 9 at Ratu Navula College in Nadi, when school reopened after COVID-19 lockdown in February this year.

But his family’s back-to-school preparations were cut short when the infection took his life. Tubuisusu died on February 3.

He was the youngest of five male siblings. He lived with his family in a church compound where his father, Josaia Lobau, was pastoring about seven minutes’ walk to the village.

Tubuisusu had only informed his mother about a headache he suffered a week before his passing.

The headache had persisted for a week. He also started to develop chills and bloodshot eyes when his family rushed him to the hospital.

His mother, Merewairita Nai, said she was told by the private doctor that he had low pressure, which affected his breathing.

Upon the advice of the doctor, Ms. Nai took her son to the Nadi Hospital.

Tubuisusu was quickly put on an oxygen machine. Ms. Nai was then informed that her son had an infection in his lungs and needed to be transported to the Lautoka Hospital.

“Because his pressure was low, they had to put a tube in him so that it could drain out the blood that was clotted in his lungs,” Ms. Nai said.

At this stage, Tubuisusu had a 50 per cent chance of survival, and his parents were then informed he had leptospirosis.

“It was too quick,” she said. Tubuisusu was a strong and active teenager, she recounted.

Like the other kids in the village, he was always eager to join his peers at the village ground or go for a swim.

“He usually played with the kids without proper shoes, even during bad weather. After a heavy rainfall, the kids would swim even when the river is still dirty.”

The death of Tubuisusu was a wakeup call for the family. They now make it a priority to take extra precautions when out in the farms or carrying out their daily activities.

Lagilolo passed away a week after Tubuisusu’s death. He was 22.

He was a former student at Fiji National University and returned to the village because of COVID-19.

Lagilolo also suffered similar symptoms as Tubuisusu. He had told his family about his headache just five days before his death.

He was cutting grass at his home on a Monday when he had told his sister-in-law about his head aching.

“I told him to rest and keep eating,” Menani Diwa said.

“He was not himself on Monday and Tuesday. On Wednesday he went up to his mother in the village. His mother was also sick.”

Ms. Diwa said when Lagilolo started developing bloodshot eyes, they had to rush him to the hospital the following Thursday.

But it was too late. His breathing worsened and his pressure had dropped. Just like Tubuisusu’s family, his family was informed by the doctors that he had leptospirosis.

“This is the first time people have died of leptospirosis in this village. Kids have always played on the same ground and swam in the same river, no one has ever died,” Ms. Diwa said.

A relative, Jone Naveli, said he was still in disbelief because he had suffered the same ordeal a few years back.

He had developed similar symptoms and had started to develop a yellowish skin color. He said he received treatment at home.

Mr. Naveli said he only visited the hospital because he was starting to develop muscle aches and other related symptoms.

Like in Korobebe Village, there are Fijians who are oblivious and even ignorant to the fatal impact of leptospirosis.

For this year alone, the cases recorded in the different divisions in Fiji are as follows: 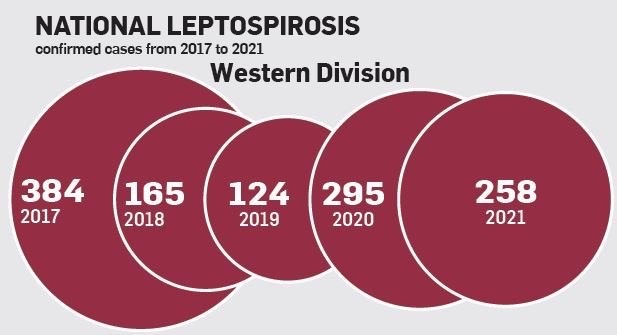 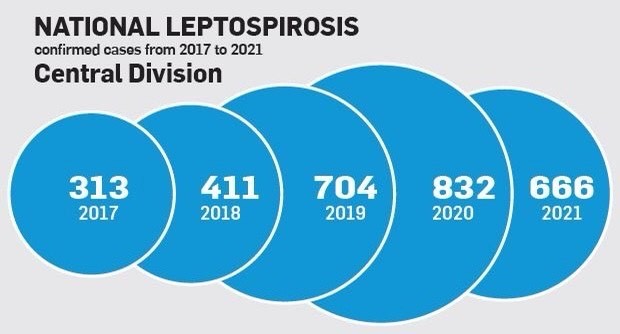 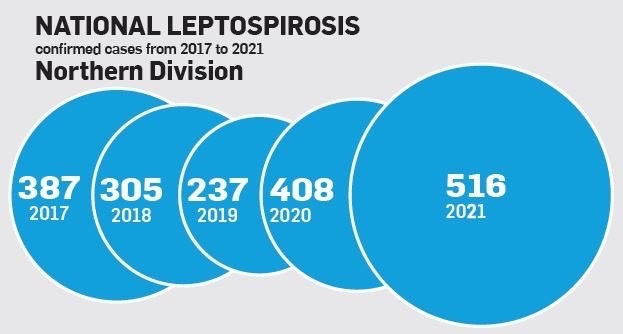 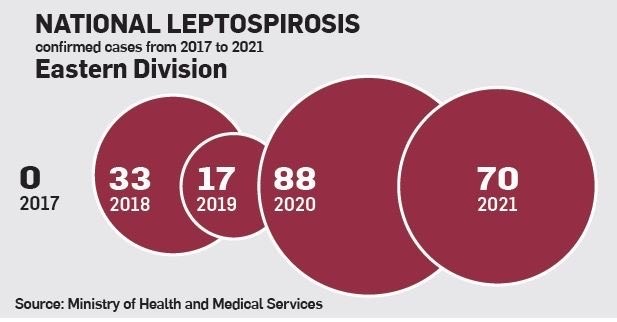 A health inspector for 10 years said the Western Division was always at risk because it was predominantly an agricultural region and was flood-prone.

Minister for Health and medical Services Dr Ifereimi Waqainabete said statements indicating that the disease was prevalent among iTaukei communities were incorrect.

“It’s not purely negligence, it’s just the fact that we [people] fail to understand the depth of what source reduction is and if we don’t do it, what it can do to us,” he said.

“People don’t understand that with communicable diseases, people die within a week, within a few days after the incubation period.”

The health inspector said the number of infections had decreased during the COVID-19 lockdown because there was no movement by the people, but this changed when the lockdown was lifted.

A senior health official, who is not authorized to speak to the media, said medical officers were advised to be alert for those presenting with symptoms during and after a heavy downpour.

Asked about the impact of climate change on the number of outbreaks over the years, she said: “Climate change is affecting the pattern of the disasters. Leptospirosis is associated with flooding when there’s a disaster, hence affects the outbreaks.”

Within village perimeters, health officials are tasked with carrying out awareness, including advising against the enclosure of animals such as horses, cattle, and pigs close to the village.

In instances where villagers do not abide by the warning, the village headman is involved, and matters are dealt directly by the Ministry of iTaukei Affairs (MoIA).

The villages and peri-urban settlements comprising mainly iTaukei are governed by the by-laws under the iTaukei Affairs Act, administered by the Ministry of iTaukei Affairs.

Despite the by-laws not being formally gazetted, there are guidelines that govern the villages.

Deputy chief executive officer for iTaukei Affairs Board Josefa Toganivalu said if there’s an outbreak in the village, the village headman and community health worker would diagnose the situation before informing the district nurse. 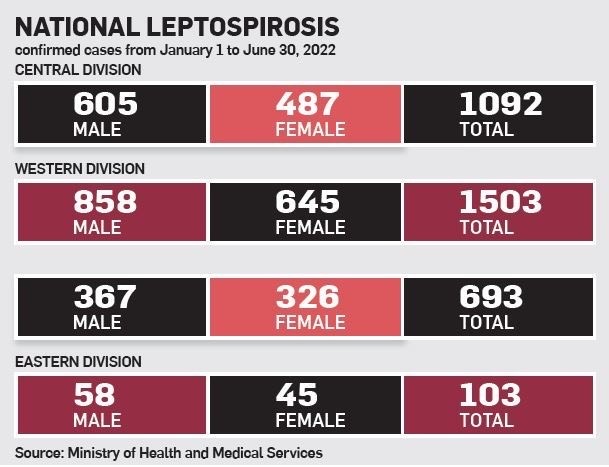 Where to go from here

MOH says leptospirosis is difficult to eliminate, therefore minimization is the best option for managing risk.

One way this is carried out is through awareness about leptospirosis and its transmission cycle.

A study titled “A process for developing multisectoral strategies for zoonoses: the case of leptospirosis in Fiji”, indicate that “leptospirosis only receives wide-spread attention in outbreaks when there is media coverage of deaths or a large number of hospitalizations”.

Permanent Secretary for Agriculture Vinesh Kumar said the coordination between the line ministries and relevant stakeholders must be strengthened.

Like the sporadic spread of leptospirosis, formal engagement among stakeholders to combat the disease seems disorganized.

So, to effectively address leptospirosis outbreaks, vigorous awareness activities must be carried out so that the community can fully understand the cause and transmission of this disease, and the best preventive measures.

This story was produced with the support of the Earth Journalism Network and was originally published by the Fiji Sun on September 4, 2022. It has been lightly edited for length and clarity.

Banner image: Korobebe Village in Sabeto, Nadi, with the Sabeto River on the left of the photo / Credit: Leon Lord/Fiji Sun. 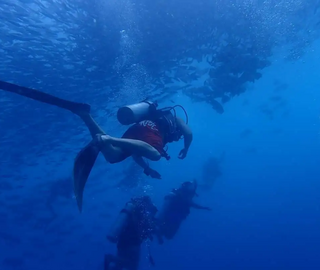