Loss of land, environmental impacts and a lack of public consultations have driven protests against a Chinese-backed port and investment zone 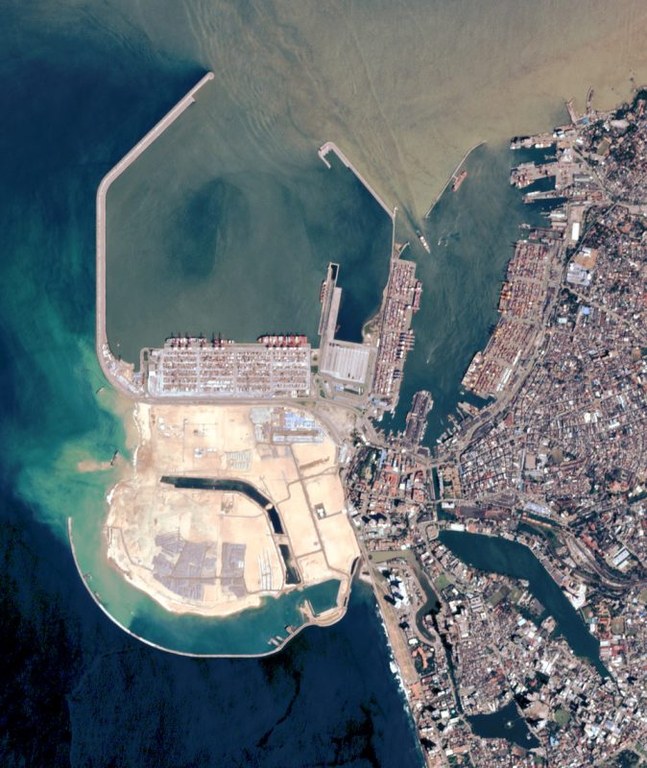 Sri Lanka Port City is a key part of China’s Belt and Road initiative, but there are growing concerns about the environmental impacts / Credit: Planet Labs/Earthrise Media

The leafy village of Beragama in Hambantota district is a throwback to a time when Sri Lanka was trying to get on to the Chinese development highway.

Far from the cranes, concrete high rises, widening highways and Chinese workers that are now a mainstay in many parts of the island, Beragama, 250 kilometres south of the capital Colombo, is still covered by verdant paddy fields.

Villagers mostly use old bicycles to get around, and the village temple, located at Beragama’s highest point, is still its nerve centre.

But over the top of the temple’s white stupa you can still see the large cranes of Hambantota harbour, built with Chinese funds in 2010 and now operated by China Merchant Port Holdings on a 99-year lease that came into effect last year.

“They have been here since 2008,” says Vimalabudhi Thero, the chief monk at the temple, alluding to the year construction started on the port.

Like investments in the ports of Gwadar in Pakistan and Chittagong in Bangladesh, Hambantota port is a key part of China’s Belt and Road initiative (BRI) that is building infrastructure and boosting regional connectivity and trade across strategic maritime and land routes.

Local fears grow over Chinese projects in Sri Lanka - The Third Pole from thethirdpole on Vimeo.

For a decade Vimalabudhi had few problems with the Chinese-funded projects that were coming up in Hambantota at break-neck speed. Then-president Mahinda Rajapaksa launched a series of projects in his home constituency. The most visible Chinese-backed projects were the new highways, cutting south through the western slopes of the island, two port projects and a new airport, among others.

It was in 2017, when Rajapaksa was defeated, that the monk from Beragama became really concerned. Burdened by heavy debt, the Sri Lankan government was looking for a release valve. The country owes at least one fifth of its over US$50 billion foreign debt to China. The situation was worsened by a stagnant economy and non-preforming projects like the Mattala International Airport, known as the world’s emptiest airport. The port has recorded negative growth.

The new government of President Maithripala Sirisena and Premier Ranil Wickremasinghe came up with a plan: they would hand over majority control of the Hambantota Port to the Chinese in a US$1.2-billion deal.

Vimalabudhi was alarmed that the agreement also included provisions for an additional 15,000-acre investment zone that would cover large portions of land in Beragama. “There were plans to take over land from our villages for this, and from what we could see they were after the most fertile land,” he said looking at the lush paddies outside his temple.

Last year Vimalabudhi was in the forefront of public protests against the investment zone, which ultimately stalled the plans despite the port handover going through. However, the government is yet to scrap the plans so the villagers remain fearful they will still lose their land. 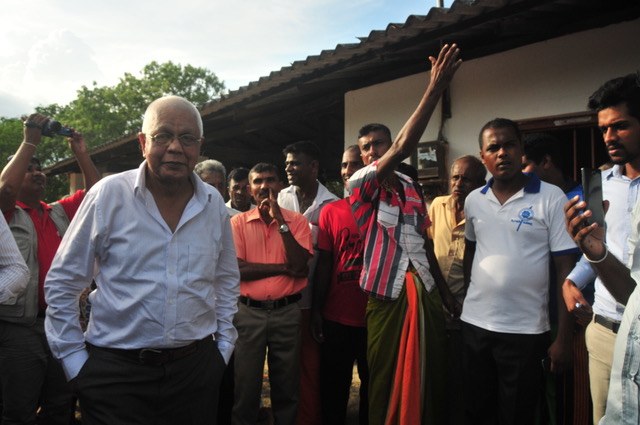 Villagers in Beragama protesting against government surveyors who visited the village in January 2017 / Credit: Amantha Perera

“Look at what they have done to our land, it looks like a giant hedgehog has been here,” says Dharamadasa Banda a 70-year-old villager.

All across Sri Lanka’s Southern Province, large swathes of agricultural land and shrub jungle have been cut open for Chinese backed projects like the extension of a highway and link roads. Inland from the airport, bulldozers are taking the earth needed for the highway with indelible effects.

The stretch of the highway linking the empty airport to the port cuts through key elephant corridors. It’s being built by China Communication Construction Company. Three quarters of the 489-hectare project runs through shrub jungle, according to an environmental assessment report obtained by the local rights body Center for Environmental Justice. 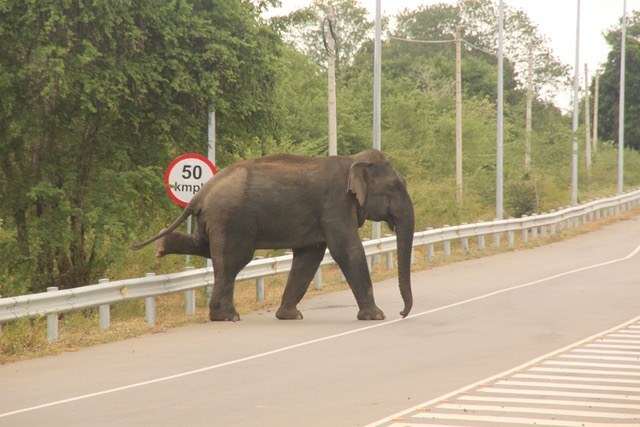 “According to the records of the Department of Wildlife Conservation there are more than 400 elephants roaming in the Managed Elephant Range and those moving between the parks also use this area on a regular basis,” the report states adding that animals roam as much as 25 kilometres a day. Between 15-20 percent of the island’s elephant population could live in the project area, the department estimates.

The airport was also built on elephant habitat, and wildlife officials in Hambantota are frequently called up to chase the pachyderms off the runway.

Landslides are one of the major risks identified. A Right to Information request to the Ministry of Higher Education and Highways in August revealed that the authorities had identified 13 landslide prone locations on the 143 kilometre stretch of the Southern Highway between the capital and Matara.

Four of the locations have already experienced landslides along with one other location that was not identified as being in danger. In May 2017, large areas of the highway were flooded during high monsoon rains. One of the lasting images of the floods was the southern exit of the highway with its semi-circular arch half submerged.

“We have never experienced any such thing in this area. The flood waters used to flow downstream to the west in the past. The highway looked as if it was blocking the waters,” said Indrarathne Abeysinghe, who lives near the exit point.

Soon after the floods then Minister of Megapolis Development Champika Ranawaka blamed the disaster on ad-hoc development projects specifically mentioning the Southern Highway as lacking a detailed environmental assessment report. His cabinet colleague Minster of Home Affairs Vajira Abeywardene argued the highway was constructed properly and was not the cause of the floods.

Available environmental assessment reports on the highway do say that the elevated roads could cause obstruction of water flows downstream but also add proper drainage systems have been built in.

There are concerns that the Port City, near the capital Colombo, could create similar problems. This involves large scale land reclamation south of the Colombo harbour and the construction of a new financial district. Coastal communities fear that the US$1 billion investment by China Harbour Engineering Company will lead to coastal erosion and harm fish populations. Further inland people worry about growing air pollution and traffic. With 95 percent of the work on the 2.3 square kilometre reclamation area complete, coastal communities and others now have to wait and see if those fears will come true.

The environmental impact assessment report by the Central Engineering Consultancy Bureau states that they do not foresee “any significant changes to the shoreline.”

Communities left in the dark

Iddamalgodda says that communities are worried about coastal erosion, landslide threats, noise and air pollution. Environmental assessment reports indicate that the sand requirement for the reclamation is 65 million cubic metres supplied from two sites while a total of 3.5 million cubic metres of rock is also earmarked. But the biggest cause for concern is the lack of information and public consultations.

“People were kept in the dark and no reliable information of this massive project was in the public domain. The agreement between the Sri Lankan authorities and the Chinese company has never been made public. There has been no consultation either with so called local beneficiaries of this project or with the critics,” said Iddamalgodda. 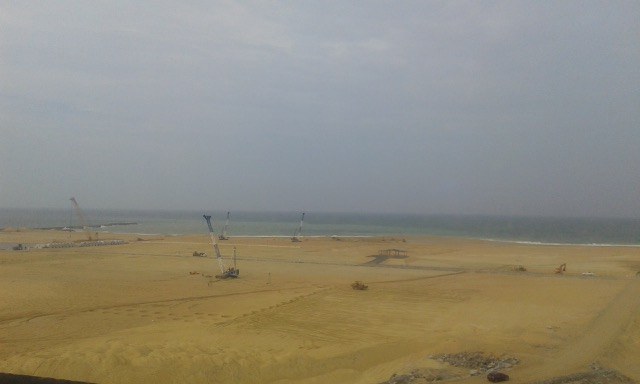 Vimalabudhi agreed that he found it next to impossible to get information on the projects other than what government officials were telling him verbally.

In 2015 when the then Mahinda Rajapaksa government was defeated in national elections, the new government said it would reevaluate the progress of Chinese projects. The Port City construction was halted from early 2015 till mid-2016 but recommenced after the Chinese investors and the new government reached an agreement on landholding.

Government changes in Colombo are unlikely to alter China’s influence. When President Maithripala Sirisena sacked his Prime Minister Ranil Wickremasinghe and appointed Mahinda Rajapaksa instead on October 26, one of the first visitors to meet Wickremasinghe and Rajapaksa separately was the Chinese envoy to Sri Lanka.

Back in Beragama, the plaque unveiled at the inauguration of the investment zone has been overrun by shrubs, but the villagers are still nervous. In early October, rumours spread through the village that government officials would pay a return visit to survey their lands.

Some of them gathered again at Vimalabudhi’s temple to plan another protest. The monk informed them these were just rumours.

“But when will we know if our lands will be safe from a takeover? Probably never, as long as the port and the airport is here, our lands are under threat,” he said.

Amantha Perera is a journalist based in Colombo. This story is the first of a series of stories looking at the environmental impacts of China’s Belt and Road Initiative in the Asia-Pacific region, supported by Internews’ Earth Journalism Network