The nearly 200 nations attending the UN climate summit here, adopted the Marrakech Action Proclamation late on Thursday evening sending out a strong signal to the world on climate action. 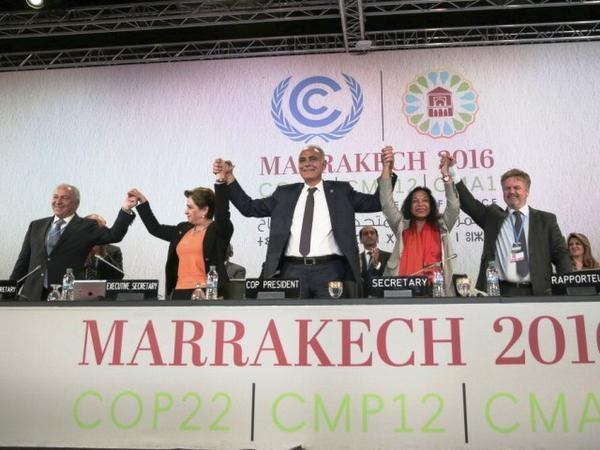 Responding to an invitation to this end by the King of Morocco, Mohammed VI, heads of state from close to 90 countries and delegations from other UN member countries issued this proclamation, a key document emerging from the negotiations at COP22, to signal a shift towards a new era of implementation and action on climate and sustainable development.

“Our climate is warming at an alarming and unprecedented rate and we have an urgent duty to respond. We welcome the Paris Agreement, adopted under the Convention, its rapid entry into force, with its ambitious goals, its inclusive nature and its reflection of equity and common but differentiated responsibilities and respective capabilities, in the light of different national circumstances, and we affirm our commitment to its full implementation,” the Proclamation read out by COP22 President Salaheddine Mezouar said.

Referring to the momentum on climate change worldwide, and in many multilateral fora, the Proclamation said that this momentum was irreversible, being driven not only by governments, but by science, business and global action of all types at all levels. The Proclamation stressed on nations having to rapidly build on the post-Paris momentum, and move forward purposefully to reduce greenhouse gas emissions and to foster adaptation efforts, thereby benefiting and supporting the 2030 Agenda for Sustainable Development that was adopted at the UN headquarters in New York last year.

The UN climate summit here had started under the shadows of the US Presidential elections results and the ascent of Donald Trump, who has called climate change a hoax and threatened to pull out of the treaty, had been the source of much uncertainty and anxiety at the summit. The Proclamation, therefore, called for the highest political commitment to combat climate change, as a matter of urgent priority.

Countries also demanded solidarity with those countries most vulnerable to the impacts of climate change, highlighting the need to support efforts aimed to enhance their adaptive capacity, strengthen resilience and reduce vulnerability.

The countries also called for an increase in the volume, flow and access to finance for climate projects, alongside improved capacity and technology, including from developed to developing countries. “We the Developed Country Parties reaffirm our USD $100 billion mobilisation goal. We, unanimously, call for further climate action and support, well in advance of 2020, taking into account the specific needs and special circumstances of developing countries, the least developed countries and those particularly vulnerable to the adverse impacts of climate change,” the Proclamation read.

The nations, who are Parties to the Kyoto Protocol (which does not include the U.S.) also encouraged the speedy ratification of the Doha Amendment with its focus on pre-2020 action.

Given the gaps in emissions reduction to stay on course for keeping global warming levels under 2C, nations also called for urgently raising ambition and strengthening cooperation amongst countries to close the gap between current emissions trajectories and the pathway needed to meet the long-term temperature goals of the Paris Agreement.

To this end, the “2050 pathways platform”, a multi-stakeholder initiative, was adopted by the High-Level Climate Champions here, aimed at supporting those seeking to devise long-term, net zero-greenhouse gas, climate-resilient and sustainable development pathways.

High-Level Climate Champions Laurence Tubiana of France and Hakima El Haite of Morroco spoke at the Marrakech summit on Thursday evening inviting nations to set on a path of decarbonisation. The 2050 pathways platform will support countries seeking to develop long-term deep decarbonisation strategies, including through the sharing of resources, knowledge and experiences, an official statement said. It will also build a broader constellation of cities, states, and companies engaged in long-term low-emissions planning of their own, and in support of the national strategies, the statement added.

Already, 22 countries have started or are about to start the process of preparing a 2050 pathway. Many others are expected to join.