The Indian army has littered Kashmir’s highlands with unexploded shells, restricting available grazing land and causing the death and injury of people and animals

Shepherds in the Indian-controlled part of Kashmir are struggling to find enough grazing land for their animals because of the large military presence in the region. The Indian army has taken over much of the region’s prime grazing ground, making it inaccessible for livestock farmers.

Tosamaidan is one such pasture. The vast meadow, located about 70 miles west of Kashmir’s summer capital Srinagar, has become deadly for shepherds and their animals since it was turned into a training ground for the Indian army. The remnants of unexploded ammunition left over from military exercises have killed sixty-three people so far, a state government inquiry revealed last year.

Before 1964, when the land was leased by Kashmir’s government to the Indian army, Tosamaidan had served as a pasture for hundreds of years.

Kashmir has seen a heavy military presence since the state was partitioned between India and Pakistan at the end of British rule in 1947. Roughly a third of modern-day Kashmir is administered by Pakistan while the rest is under Indian control. Kashmiris living on the Indian side rose up in arms in 1989 in an insurgency that peaked in the mid-1990s and continues today, though with less intensity.

India’s Ministry of Defence says the army currently occupies 28,840 hectares of land in Kashmir, while the Kashmir state government claims the army has occupied 53,353 hectares of land, the majority of it illegally.

Restricted movement in some highland pastures is one of the major challenges facing the livestock industry, according to a report from Kashmir’s animal and sheep husbandry department. Lack of good grazing land means animals cannot get the nutrients they need. Herders are already losing pastureland to massive urban development and encroachment of grazing land.  “In comparison to the national availability of 1.0 hectares to one livestock, only 0.4 hectares is available in the state of Jammu and Kashmir, as most of the areas are inaccessible,” a department report says.

Tosamaidan was a prime grazing ground for sheep, goats and cattle in the past. “More than 25% of Kashmir’s sheep population used to graze in this huge meadow, which has not only become difficult now, but highly hazardous as well,” said an official from the animal husbandry department. Hundreds of animals have been killed by the shells, he added.

“Our elders say that the grass of Tosamaidan was known for its uniqueness among shepherds who would come from far-off areas,” Fayaz Malik, a local shepherd told the thethirdpole.net.

The army lease came to an end in April this year. However, the troops have continued to use it, despite massive protests by the residents of 30 adjoining villages.

The villagers want to stop the Indian army from renewing their lease. They complain military exercises near their homes have resulted in heavy casualties and maiming of hundreds of villagers over the past years and hampered agricultural and livestock activities and destroyed any chances of developing tourism.

If it had not become a firing range, the pasture could have been a sought-after tourist destination like Gulmarg close by.

In a fresh incident in May this year, a young girl died instantly and her brother lost his legs after they stumbled on a live shell. A few years back, three young children were killed after mistaking a live shell for a toy.

Villagers have been able to garner support from human rights activists and both pro-India and pro-freedom Kashmiri politicians. They say that the number of people maimed and killed by unexploded fire arms in the area is much higher than the official figure.

Syed Atta Hasnain, a former general of the Indian army in Kashmir, wrote in a recent article: “On paper these are exclusion zones where no civilians are permitted but the reality is something else.” Children of shepherds, he points out, are usually the most vulnerable as they play in the areas vacated by the army and inadvertently set off the unexploded munitions.

Hasnain says the army removes and destroys unexploded weapons “but carelessness can sometimes lead to such munitions being left behind although clearance is invariably obtained from the local police before the army units depart.” This claim is strongly refuted by local people: “If this is true then so many people and animals would not have got killed,” says Malik.

Last month, Kashmir’s forest department demanded that Tosamaidan should be declared an eco-sensitive zone so that it could be handed over to the wildlife department. An inspection report of the department has revealed that thousands of trees have also been damaged as a result of artillery exercises in the meadow besides the loss of human lives and livestock. 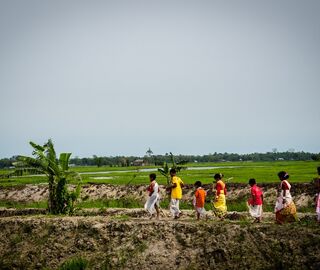 Tinsukia, India
In Assam – a wetland too popular for its own good
© 2022 Earth Journalism Network All rights reserved.