A lawless town on the Myanmar-China border has become a major hub for smuggling endangered pangolins, the most trafficked animal in the world, writes Beth Walker 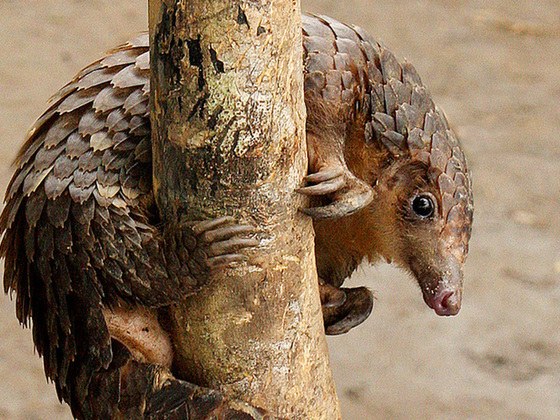 Pangolins are being hunted to extinction for their meat and scales, mainly to meet demand in China and Vietnam (Image by Bart Wursten)

Every day thousands of Chinese tourists pour over the border to Mongla, a town in Myanmar’s Shan state and a haven for gambling, transvestite shows and illicit drugs. Fondly known as the “arsehole of China” (中国的肛门), this former backwater has also become the centre of the region’s booming illegal wildlife trade.

In particular, Mongla has become a major gateway for smugglers bringing endangered pangolins to sell in China, new research published in the science journal Global Ecology and Conservation has revealed.

The pangolin may not attract as much attention as tigers or elephants – but the cute looking scaly anteater is the world’s most trafficked animal. Every year, thousands of pangolins get illegally hunted for their meat and scales, mainly to meet the demands of Chinese and Vietnamese consumers. Their rare meat is considered exotic and is a favourite at banquets, while their scales are used for a range of ailments from rheumatism to cancer.

Pangolins face face ill-treatment across South East Asia and in Africa. In remote areas of Sumatra in Indonesia professional pangolin hunters poach hundreds of thousands per year. Many of these creatures are then smuggled into China via Mongla.

Researchers from the Xishuangbanna Tropical Botanical Gardens, part of the Chinese Academy of Science, and Oxford Brookes University visited Mongla over a period of ten years and documented the growing trade in whole pangolins and pangolin parts – with an estimated total value of over US$750,000 (490 million yuan).

Vincent Nijman, lead author of the recent paper, says the team saw live pangolins, as well as scales, skins, fetuses and pangolin wine, being openly traded in the town’s markets, specialised wildlife shops and wild meat restaurants. Large quantities are also driven over the border in vans on a daily basis.

Elephant and hippopotamus ivory from Africa, white rhino horn, tiger skins from India and Tibetan antelope from the Himalayas were also found on display in glass cases in shop windows and in the market place, Nijman said.

The open trade of easily identifiable protected animals belies a complete lack of local law enforcement, which allows perpetrators to go about their business with complete impunity.

Myanmar and China share a long porous border, and with its strong economic links to China and endemic corruption, the country is a gateway for a variety of illegal wildlife species into China.

Mongla, in particular, is something of a Wild West. The town is controlled by notorious Shan-Chinese warlord Lin Min Xiang with the support of the National Democratic Alliance Army. The Myanmar central government has little authority there. About 80% of people are Chinese, Mandarin is the linga franca and the yuan is the currency of choice.

Pangolin trade is illegal under Burmese and Chinese law and in China trading its parts is a criminal offence punishable by hefty fines (US$32,000 or 200,000 yuan) or a prison sentence. Both countries have signed up to CITES, the international treaty set up to control the wildlife trade.

There have been a few seizures in other parts of northern Myanmar around Mandalay and across the border in Yunnan province in southwest China, but no real action to stem the daily flow over the border.  Between 2010-2014, pangolins and their parts worth US$3.09 million in Myanmar were seized according to CITES data, but the authorities have not reported a single case to the international body. Seizures only reflect a fraction of the total trade, indicating the size of the problem.

China’s leaders have made greater efforts to stamp out the illegal ivory trade in recent years, crushing confiscated items and attending international conferences about the illegal wildlife trade. But this action has not extended to dealing with local level corruption.

Local officials have no incentive to crack down on cross border trade and choke the black market, said Nijman. The Chinese Academy of Sciences recently ran a workshop on the illegal trade in Mongla, but no real measures have been taken.

If the Chinese government decided the trade was too embarrassing they would shut it down, Nijman argued, pointing to action taken in Boten in Laos just across the Chinese border where the government cut the power to control the drugs and gambling trade.

It’s not just a question of stamping out supply, tackling consumer demand in China and Vietnam and raising public awareness of the pangolin’s endangered status is also key.

A successful celebrity campaign led by former basketball giant Yao Ming and actor Jackie Chan helped dent the demand for shark fin in China with their message: “When the buying stops, the killing can too".  A number of airlines, shipping companies and restaurant chains in China subsequently took shark fin off the menu and consumption of the shark fin soup – considered a sophisticated delicacy –  has dropped by half. Similar campaigns have been waged against buying ivory.

Yet the plight of the pangolin has attracted little public attention to date. The nocturnal and notoriously shy animal clearly now needs its own celebrity campaigner to champion its cause.